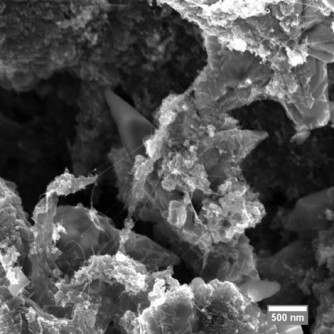 Newswise — WASHINGTON D.C., April 22, 2014 -- By combining the powers of two single-atom-thick carbon structures, researchers at the George Washington University's Micro-propulsion and Nanotechnology Laboratory have created a new ultracapacitor that is both high performance and low cost.

The device, described in the Journal of Applied Physics, capitalizes on the synergy brought by mixing graphene flakes with single-walled carbon nanotubes, two carbon nanostructures with complementary properties.

Ultracapacitors are souped-up energy storage devices that hold high amounts of energy and can also quickly release that energy in a surge of power. By combining the high energy-density properties of batteries with the high power-density properties of conventional capacitors, ultracapacitors can boost the performance of electric vehicles, handheld electronics, audio systems and more.

Single-walled carbon nanotubes and graphene both have unique and excellent electronic, thermal, and mechanical properties that make them attractive materials for designing new ultracapacitors, said Jian Li, first author on the paper. Many groups had explored the use of the two materials separately, but few had looked at combining them, he said.

“In our lab we developed an approach by which we can obtain both single-walled carbon nanotubes and graphene, so we came up with the idea to take advantage of the two promising carbon nanomaterials together,” added Michael Keidar, a professor in the Department of Mechanical and Aerospace Engineering in the School of Engineering and Applied Science at GW, and director of the Micro-propulsion and Nanotechnology Laboratory.

The researchers synthesized the graphene flakes and nanotubes by vaporizing a hollow graphite rod filled with metallic catalyst powder with an electric arc. They then mixed the two nanostructures together to form an ink that they rolled onto paper, a common separator for current commercial capacitors.

The advantage of the hybrid structure, Li explained, is that the graphene flakes provide high surface area and good in-plane conductivity, while the carbon nanotubes connect all of the structures to form a uniform network.

While other types of ultracapacitors have also achieved the high specific capacitance of the graphene/nanotube hybrid, the researchers say, the main advantage of the combination approach is its low costs, since the team has developed a simple way to manufacture large amounts of the desirable mix of carbon nanostructures.

The hybrid ultracapacitor is also small and light, an advantage as electronic devices get ever smaller.

This work was supported by the NSF/DOE Partnership in Plasma Science and Technology (NSF Grant No. CBET-0853777 and DOE Grant No. DE-SC0001169), and an NSF Award (Title: EAGER: Exploring plasma mechanism of synthesis of graphene in arc discharge, NSF Award No. 1249213).

ABOUT THE JOURNALJournal of Applied Physics, published by the American Institute of Physics, is an influential international journal publishing significant new experimental and theoretical results of applied physics research. See: http://jap.aip.org