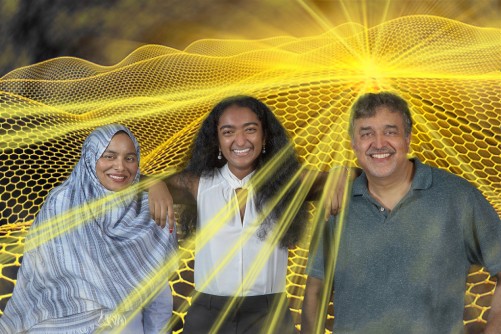 Newswise — When most people think of tea and molasses, their thoughts don’t stray any further than the kitchen.

Meghana Bollimpalli, a Central High School student who was mentored by two chemistry professors at the University of Arkansas at Little Rock, saw the potential to create a less-expensive renewable energy source that has earned her more than $60,000 in scholarships and prize money from science fair competitions.

Siraj, who mentored four high school students during the 2017-18 school year, said Bollimpalli was a talented and inquisitive student with a gift for chemistry.

Bollimpalli’s novel, low-cost approach for synthesizing materials could greatly cut the production and energy costs of making electrodes for supercapacitors, which are used as energy sources in electronic devices including cars and medical equipment.

She found that combining common substances like tea and molasses with nitrogen- and phosphorus-containing salts in a commercial microwave formed a powder that could be used as a coating for electrode-like materials, giving them similar properties of more expensive metals like platinum.

“There is an increase in the demand for energy due to the alarming rate at which we are using our nonrenewable resources and the increase in population worldwide,” Bollimpalli said. “To address this demand, we need to find an environmentally and economically feasible way to store our energy. Supercapacitors are devices that address this demand due to their great properties such as portability, long cycle lifetime, and high energy density. But the problem is, in order for a supercapacitor to actually work, it needs a great electrode.”

Electrodes in today’s market are usually made from expensive metals like platinum, gold, and palladium and can cost thousands of dollars. To address this problem, Bollimpalli created carbon-based electrodes for under $1 using renewable waste products such as tea powder and  molasses.

She won a total of $58,000 in in May at the 2018 Intel International Science and Engineering Fair in Pittsburgh, Pennsylvania. She was one of two Intel Foundation Young Scientist Award winners, taking home $50,000 as one of the top three presenters at the event, which attracted student researchers from 75 countries. She also won $5,000 for the Best of Category award in chemistry and $3,000 for a first-place finish in the chemistry category.

So far, Bollimpalli’s project has won more than a dozen awards at six competitions in three states, winning about $61,000 in scholarship and prize money.

She most recently was a Gold Medal recipient at the Genius Olympiad in Oswego, New York, in June. In March, she won a $1,500 scholarship as one of the top two award winners at the State Junior Science and Humanities Symposium in Russellville. At the Arkansas State Science and Engineering Fair in Conway, she won four awards, including the Arkansas Department of Environmental Quality Quest Award, which landed her a summer internship with the Arkansas Department of Environmental Quality.

“I am very thankful for everyone who helped me with this project. Science is not an individual project. You have to have a collaboration and have the perspectives of many people,” Bollimpalli said. “Dr. Tito and Dr. Siraj were patient in answering all my questions and proofreading my paper and exploring ideas and concepts with me. Dr. Siraj has a way to telling you things that make it stick.”

The best place to do research

Bollimpalli has been conducting research at UA Little Rock with the help of mentors since she was a freshman. She first worked with Dr. Shawn Bourdo in the UA Little Rock Center for Integrative Nanotechnology Sciences to create bioplastic samples to address the amount of plastic waste in the ocean. She synthesized bioplastic materials that could be used to create fast-acting biodegradable plastic shopping bags.

“Regular plastics take hundreds of years to degrade, but the bioplastic samples I synthesized biodegraded in a week after you threw them away,” she said.

In 2017, Bollimpalli worked with Dr. Anindya Ghosh, professor of chemistry. They used waste carbon dioxide to produce an eco-friendly, less-expensive cyclic carbonates, which are used in lithium ion batteries and pharmaceutical products like lipstick.

“I want to continue doing research at UA Little Rock because I have had great mentors and research opportunities here,” Bollimpalli said. “I love the professors and mentors and labs. I’d like to work again with Dr. Tito and Dr. Siraj, and I definitely want to stick within the chemistry department.

I am lucky to be one of the few, the professors are willing to mentor. It was a great opportunity to learn so much and to meet all of the people at the international competitions. Getting all of this knowledge before I go to college is going to really give me a step up in college.”

The Chemistry Department faculty at UA Little Rock is highly active in research as evidenced by funded research grants, publications, and patents. At the undergraduate level, faculty in the Chemistry Department mentored 15 Undergraduate Research Signature Experience awardees, all of whom presented at the 2018 Student Research and Creative Works Showcase and some at the Chemical Society National Meeting in New Orleans.