A pioneering study carried out among patients in remission from rheumatoid arthritis has determined that they display significantly higher temperatures than healthy individuals. 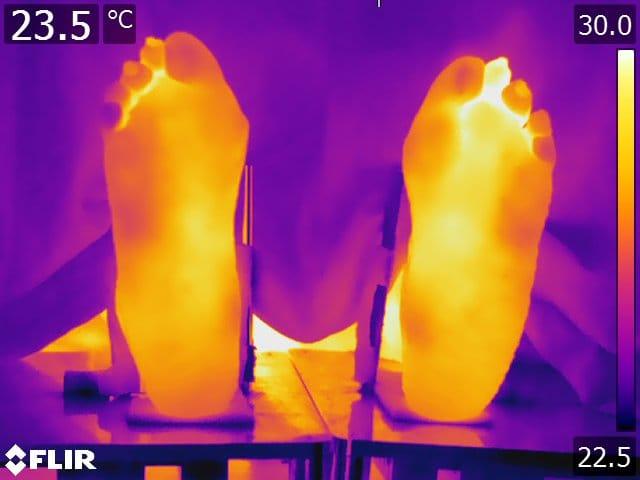 Thermal image showing temperatures in the different regions of the foot.

Newswise — A pioneering study carried out among patients in remission from Rheumatoid Arthritis has determined that they display significantly higher temperatures than healthy individuals.

The work, published in PLOSONE and undertaken by University of Malta and Staffordshire University, compares thermographic patterns of patients with Rheumatoid Arthritis (RA) in remission with healthy individuals.

More than 31 RA patients in remission were recruited from the clinics in Malta and thermal images of their feet were taken. Temperatures in the different regions of the foot - medial, lateral, forefoot and heel regions - were analysed and compared to a cohort of more than 52 healthy adults.

Dr Alfred Gatt, from the University of Malta and a Visiting Fellow at the Centre for Biomechanics and Rehabilitation Technologies, Staffordshire University, led the study. He said: "Our previous study which looked at the joints of the hands highlighted that thermal imaging has the potential to become an important method to assess Rheumatoid Arthritis.

"These tests demonstrated a significant difference in temperatures in all the regions of the forefoot between RA patients in remission and healthy patients. This provides the basis of future studies to assess whether thermographic patterns change with disease activity."

Dr Cynthia Formosa, Head of Podiatry at the University of Malta and Visiting Fellow at Staffordshire University added: "This paper has set out a baseline that demonstrates that even when there is no inflammation detected by conventional methods, the heat emitted over each foot joint is higher than that of healthy adults.

"This is important because it implies that some underlying disease process and that thermography is sensitive enough to detect these changes."

Professor Nachi Chockalingam, co-author of the paper and the Director of the Centre for Biomechanics and Rehabilitation Technologies, Staffordshire University, said; "This has implications for both the continued management and self-care of patients in remission from RA.

"In future it may be possible to use small thermal imaging cameras as a screening tool that can be used by both clinician or patient themselves to detect early changes and prevent further damage to the joints, which can result in significant deformity and disability."

"Remission is a state whereby the RA, which is an autoimmune disease, is in a controlled state and there is no active inflammation going on in the joints. It does not mean that RA is not present and that it cannot flare up again What we are now saying is that these patients need continuous monitoring."

The results of this study concur with another paper published by the same authors on the joints of the hands in Scientific Reports here.