As injections or pills, drug inhibits an enzyme that is active in many cancer types 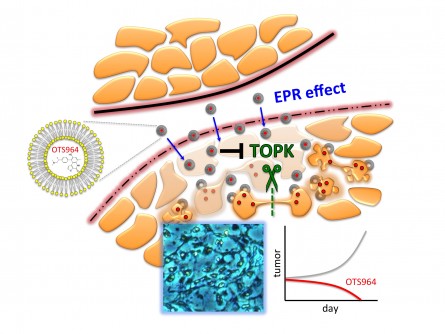 Newswise — A new drug, known as OTS964, can eradicate aggressive human lung cancers transplanted into mice, according to a report in Science Translational Medicine. The drug, given as a pill or by injection, inhibits the action of a protein that is overproduced by several tumor types, including lung and breast, but is rarely expressed in healthy adult tissues. Without this protein, cancer cells fail to complete the cell-division process and die.

When taken by mouth, the drug was well tolerated with limited toxicity. An intravenous form, delivered within a liposome, was just as effective with fewer side effects. Both approaches—described in the October 22, 2014 issue of STM—led to complete regression of transplanted tumors.

“We identified the molecular target for this drug ten years ago, but it took us nearly a decade to find an effective way to inhibit it,” said study author Yusuke Nakamura, MD, PhD, professor of medicine at the University of Chicago and deputy director of the University’s Center for Personalized Therapeutics. “We initially screened 300,000 compounds and then synthesized more than 1,000 of them, and found a few that were likely to work in humans. We focused on the most effective. We think we now have something very promising.”

OTS964 targets TOPK (T – lymphokine-activated killer cell – originated protein kinase), a protein that is produced by a wide range of human cancers and is believed to promote tumor growth. High TOPK expression correlates with poor prognosis in patients with breast and lung cancer.

Initial studies of the drug, and a precursor called OTS514, found they were effective in killing cancer cells. But they could disrupt the production of new red and white blood cells, causing hematopoietic toxicity such as mild anemia and increasing the risk of infection. At the same time, the drugs increased the production of platelets, which help in blood clotting.

When the researchers encapsulated the drugs in liposomes—microscopic bubbles similar to a cell membrane, commonly used to transport drugs within the body—the drug no longer caused this decrease in red and white blood cells. This approach “completely eliminated the hematopoietic toxicity,” the researchers wrote.

They tested OTS964 alone and in liposomes in mice with a highly aggressive human lung tumor known as LU-99. They allowed the tumors to grow to 150 cubic millimeters—about the size of a raisin—and then administered the drug intravenously to six mice, twice a week for three weeks. The tumors shrank rapidly and continued to shrink even after treatment stopped. In five of the six mice, the tumors completely disappeared—three within 25 days of the first treatment and two within 29 days. Mice that received the liposome-coated drug had no detectable toxicity.

The drug also proved effective when taken in larger doses by mouth. Six mice with LU-99 lung tumors were fed 100 milligrams per kilogram of OTS964 every day for two weeks. Again, continuous tumor shrinkage was observed after the final dose of the drug. In all six mice the tumors completely regressed. All of the mice had low white-blood-cell counts after treatment, but they recovered within two weeks.

Although this was a small study, the outcome was dramatic. Seeing these results was a “quite exciting moment,” said Nakamura, who stepped down from his role as Director in the Japanese Government's Office of Medical Innovation to join the faculty at the University of Chicago in April 2012. “It is rare to see complete regression of tumors in a mouse model,” he said. “Many drugs can repress the growth, but it is uncommon to see them eradicated. This has rarely been reported.”

Similar studies of the drug’s effects on tumor cells growing outside the body enabled the researchers to videotape the process as the cancer cells died. TOPK appears to play a central role late in cytokinesis, the final stage in cell division. Dividing cancer cells would begin to separate into two new cells, but were unable to fully disconnect, retaining an intercellular bridge.

“Without TOPK the cells can’t seem to divide; they can’t make the break,” Nakamura said. “They can’t complete the process. Instead they remain tethered by a tiny bridge. When that finally breaks apart, they can’t close the membrane. Everything within the cells spills out, they suffer and then die.”

TOPK may provide a good drug target for several types of cancer. This study involved primarily lung cancers, but the gene is frequently upregulated in breast, brain, liver, bladder and other solid tumors as well as certain types of leukemia. The researchers are working with oncologists at the University to begin a phase-1 clinical trial as soon as the fall of 2015.

Funding for the study was provided by the New Energy and Industrial Technology Development Organization (NEDO) of Japan and OncoTherapy Science Inc. (OTS) of Kawasaki, Kanagawa, Japan, which produces OTS964. OTS was founded in 2001 to develop anti-cancer medicines based on research targeting oncogenes and proteins by Nakamura.

Additional authors include Jae-Hyun Park and Houda Alachkar of the University of Chicago; and Yo Matsuo, Takashi Miyamoto, Shinji Yamamoto and Shoji Hisada of OncoTherapy Science Inc. Nakamura and Park are advisors to OTS and Nakamura is a stockholder. 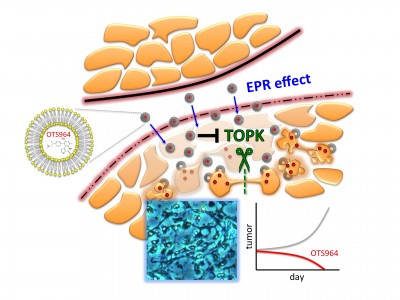