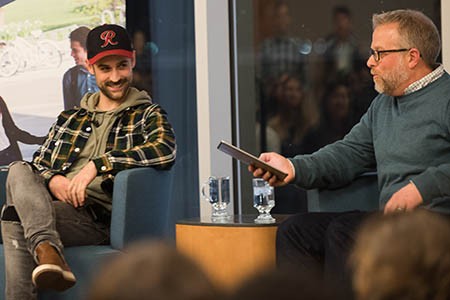 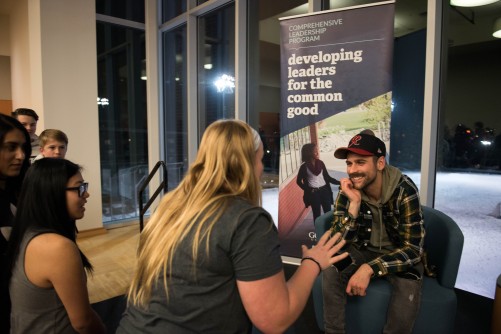 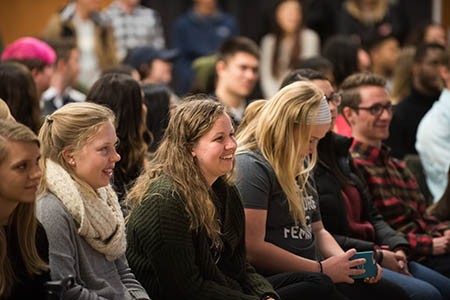 By Megan Carroll and Peter Tormey

“We are honored that Ryan Lewis would spend the evening with us, examining his influences and ways that he is leading in our culture,” Armstrong said.

With songs like “Same Love” and “White Privilege II,” Macklemore and Ryan Lewis address social justice issues. Lewis said such songs are not necessarily the kind people will listen to over and over but he hopes they spark conversations.

“Heavy good songs that say something should be made and should be played,” he said. “I hope our fans are able to have fun with songs that are fun and have ears and a willingness to have dialogue they might not have had” over the more “heavy” songs.

A Spokane native, Lewis attended Ferris High School before his family moved to Seattle where he graduated from Roosevelt High School and earned a degree in the history of comparative ideas from the University of Washington.

Macklemore and Ryan Lewis sold millions of copies of their 2012 debut album “The Heist,” which included hit singles “Thrift Shop” and “Can’t Hold Us.”

Lewis recalled connecting with his future creative and musical partner rapper Ben Haggerty, known as Macklemore, through the early social network Myspace. Lewis was 17 at the time and Macklemore was a regionally known solo rapper in his early 20s. Lewis credits their success as independent artists to a combination of factors including hard work, video production skills, the rapidly increasing popularity of blogs and music videos through YouTube, and luck.

“We were disruptive in terms of showing that YouTube is powerful. You can grow as an independent artist to the point that radio can’t ignore you,” he said.

Asked about the impact of success on his life and work, Lewis said, “it shifts your paradigm.” Now, he said, “I just want to continue to grow. My goal is to grow.” In a culture focused on execution and results, Lewis also said the success is allowing him some time to focus on practice. He’s taking piano lessons for the first time to add to his skillset.

“That’s where I’m at and it’s the polar opposite of goals,” he said.

Asked about strategies to become the best leader possible, Lewis suggested people lean into their strengths and know themselves before they can influence others.

“For me, I’m reliable for honesty but I’m not necessarily reliable for making you feel good,” he said. “People are combinations of toolsets and character qualities. It all comes down to ‘how do I say what I need to say but not crush you and at the same time be effective.’”

Macklemore and Ryan Lewis also support charities and causes such as civil rights, unemployment and career support. Lewis helped launch the 30/30 Project, founded by his mother Julie, a 30-year HIV survivor. The project is a partnership between the Lewis family and Construction for Change, improving access to comprehensive healthcare in communities impacted with HIV/AIDS by building 30 medical facilities worldwide.

Lewis said his mother contracted HIV in 1984 when she gave birth to her first daughter, Teresa, and needed a blood transfusion. When diagnosed in 1990, she was given only a few years to live. Thanks to advanced medicine, she has beat the odds and lived. Thirty years later, in 2014, Julie wanted to celebrate her journey and her passion for community health, so she launched the 30/30 Project.

“Success opens doors to do stuff, and for people to support you,” Lewis said.

Asked to define success, Lewis said, “to find joy, growth, and happiness in the process.”

Students leaving the event were impressed.

“My biggest takeaway was becoming what you want to become is attainable for anyone,” said senior Abby Anderson, an art major who is earning minors in chemistry and leadership.

“I really like how he discussed both sides of the situation: luck and hard work,” said freshman Francesca Nevil, who is majoring in international relations and sociology with a minor in leadership. “We work in the grey areas.” 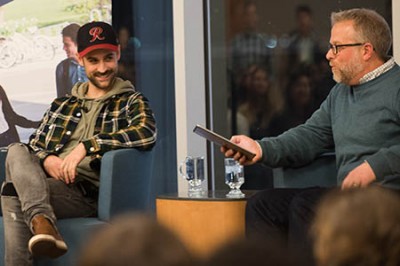 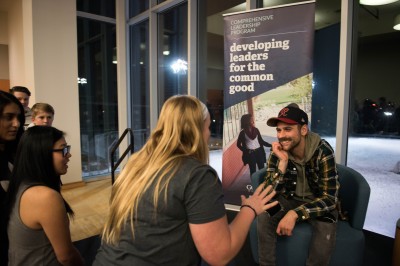 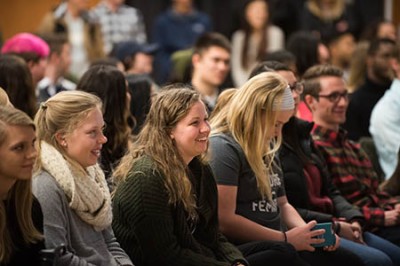