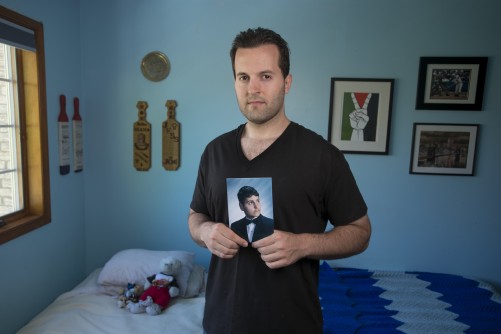 Jessie Hanna with a photo of his deceased brother, Sean, in the room they once shared.

“My brother never wanted his disease to define him. To him, cancer was an afterthought,” says the fourth-year Robert Wood Johnson Medical School student, sitting in his childhood bedroom in the family’s Piscataway, NJ, home.

This is the room he shared with Sean, who was a Rutgers University student studying broadcast journalism when he passed away in April 2007 at age 20. The room is much as Hanna remembers it: their beds side by side, the way the two lived the short time they had together.

Hanna recently moved back home before graduating from medical school this May. He will start his residency in pediatric cancer medicine at the Icahn School of Medicine at Mt. Sinai in New York City. “I realized how fortunate and inspired I would be to work with children fighting cancer – children like Sean,” he says of his decision to pursue this field.

In addition, Hanna also started a foundation to ease the burden of families going through similar struggles.

The oldest two of the four Hanna children, Jessie and Sean played sports and rooted for the Yankees together, joined Sigma Phi Epsilon fraternity at Rutgers and enjoyed the arts.

“Sean was the classic little brother – whatever I did, he followed,” Hanna says. “He went to baseball practice, acted in school plays and worked at Rutgers’ CORE radio station. He looked for ways to help others and volunteered with the rescue squad and fire department. Cancer pushed Sean to live.”

After Sean’s death, the family went through a period of shock, disbelief and grief, but as time passed, Hanna decided to find a way to honor his brother’s memory with the creation of the Sean Hanna Foundation. The foundation provides everything from financial support for living expenses and services, such as lawyers and social workers, to assisting with the purchase of medical items including plane tickets to transport families to hospitals, home renovations to accommodate a child’s special needs and scholarships for children and their families who are going through treatment.

“We help any family who demonstrates financial need and whose child has a verifiable hematologic/oncologic disease,” says Hanna. “On average, we assist about three families a month. We have been in existence for six years and have never turned down one family in need.”

Hanna’s other mission with the foundation is providing seed research funding for promising projects and therapies that can help children with cancer. “Pediatric cancer research is severely underfunded,” he says.

As a 2007 undergraduate at Rutgers, pursuing degrees in exercise Science and Middle Eastern studies, Hanna organized many large events, including blood and bone marrow drives that resulted in five people finding matches. He received Rutgers’ Spirit of Service Award and the Rutgers Excellence in Alumni Leadership Edward J. Bloustein Award, which recognizes community service outside the university. In 2007, he was chosen to represent New Jersey as the recipient of the Jefferson Award, the highest national honor for public service.

“It was an honor to receive this award, but more importantly it helped raise awareness for pediatric cancer and for our foundation,” says Hanna. “I want to help families who are struggling with cancer be able to focus only on their child’s health and not have to worry about the mortgage.

Hanna is planning new fundraising efforts, including a June 6 golf outing and a 5K run on September 20. He is also searching for more corporate sponsors to help the foundation continue its mission.

“Despite our circumstances, we grew up in an incredibly loving, supportive household. I spent many nights in the hospital taking care of my brother,” he says. “I would have continued doing that for our lifetime if it meant Sean could still be here with us.”