Peeling Back History on the Tufts Cannon 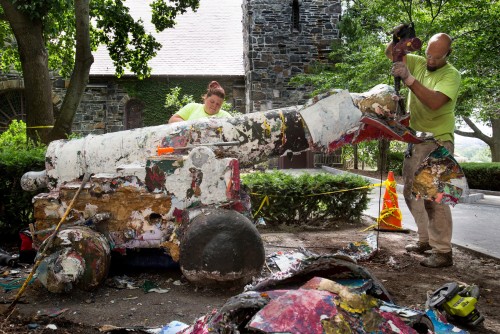 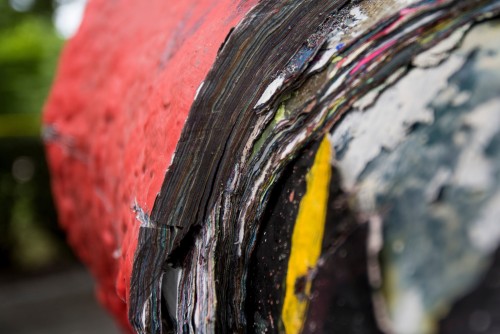 A replica cannon on the Tufts University campus is being stripped down to the base for the first time in decades, revealing thousands of layers of paint. 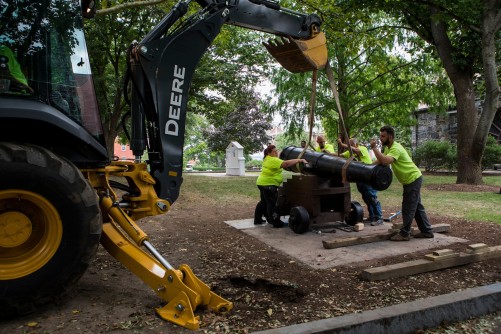 A recently cleaned and freshly painted cannon is reinstalled to its rightful place at Tufts University on August 31, 2018.

Newswise — MEDFORD/SOMERVILLE, Mass. (Sept. 10, 2018)—A decades-old Tufts University tradition of students painting messages of encouragement, resistance, love and celebration on a historic cannon located on campus just got a refresh. Thousands of layers of paint – weighing 2,000 pounds – were removed from the cannon to stabilize the fixture and allow for new generations of Jumbos to enjoy.

For years, tradition has dictated that the cannon must be painted under cover of darkness. Students who paint the cannon are then tasked with guarding their work until dawn to make sure their message is not painted over during the night.

Crews worked for six weeks to remove the paint, starting in early July and working through sweltering heat. The paint's thickness initially resisted sandblasting and had to be stripped manually.  The paint removed from the cannon filled a 12-foot box truck three times over.

The three-inch think layers of paint taken from the cannon resemble rings of a tree trunk, and mark history and time in a similar way.

"It really needed a cleaning," said Ken Person, director of building operations at Tufts. "It just had paint on top of paint. It was time—and we had some concerns about the stability of the base. I'm glad… we have to take care of our Tufts traditions."

The messages stripped from the cannon this summer included notes of encouragement to Jumbo athletic teams, inside jokes, commencement celebrations, reminders to vote in elections, birthday greetings, messages of protest, commemorations of global and personal tragedies, and best wishes to Tufts couples getting married at the campus's nearby chapel.

To complete the restoration, the cannon was sandblasted once all the layers of latex paint were removed. Frequent campus landscaper Your Space helped move the cannon to Mass Green Blast, where it was sandblasted and then primed. The fully-restored cannon was lifted back into place shortly before fall classes began. It has already been painted by students a number of times.

Tufts Facilities estimates that the last time the cannon was stripped was 1996, before most current Tufts undergraduates were born.

Some of the paint "chips" have been accepted by Tufts University Art Gallery into the university's permanent collection, to preserve the heartfelt efforts of current and former Jumbos.

"We marveled at the layers of history that the paint represented," said Laura C. McDonald, art collections registrar. "We agreed we should bring some back to the gallery for posterity. They are actually quite compelling and beautiful."

According to Tufts Digital Collections and Archives, the cannon is a replica of a cannon taken from the deck of the USS Constitution, or  "Old Ironsides," the 1797 frigate that is now a museum in Charlestown Naval Yard.

Historic records suggest that the tradition of painting the cannon began as part of a campus protest. During the fall semester of 1977, the cannon was painted to oppose the controversial visit and conferral of an honorary degree on Imelda Marcos of the Philippines. It was quickly repainted by a student who objected to its defacing.

Since then, it has been painted nearly every night for four decades. The Tufts cannon once even had its own Instagram account documenting its changing paint jobs.

The Tufts cannon is one of a handful of quirky traditions around and stories about the Tufts campus. For instance, Tufts mascot Jumbo is named for a circus elephant donated by former university trustee P.T. Barnum. Barnum donated the real Jumbo's taxidermied hide to Tufts after the elephant's death in a rail accident in Canada. On display in a campus museum, students would pull Jumbo's tail for luck before exams. When the building housing the stuffed elephant burned down in the 1970s, Jumbo's ashes were gathered into a peanut butter jar, still kept on campus as a talisman. A statue of a trumpeting Jumbo sits in front of Barnum Hall, not far from the cannon.

Additionally, campus legend says that lovers who kiss under Tufts' Bowen Gate will get one day get married.

More information about unusual Tufts traditions can be found at https://admissions.tufts.edu/about-tufts/tufts-traditions/. 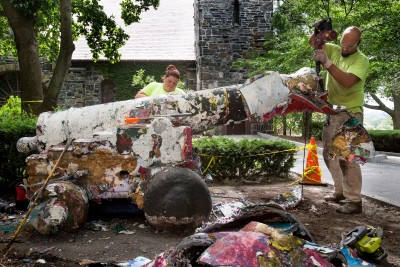 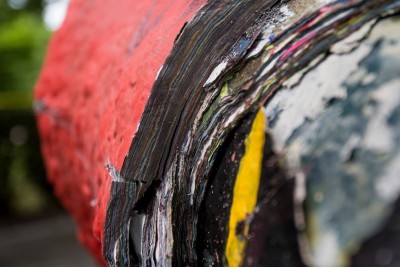 Caption: A replica cannon on the Tufts University campus is being stripped down to the base for the first time in decades, revealing thousands of layers of paint. 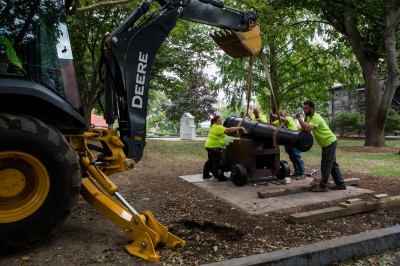 Caption: A recently cleaned and freshly painted cannon is reinstalled to its rightful place at Tufts University on August 31, 2018.