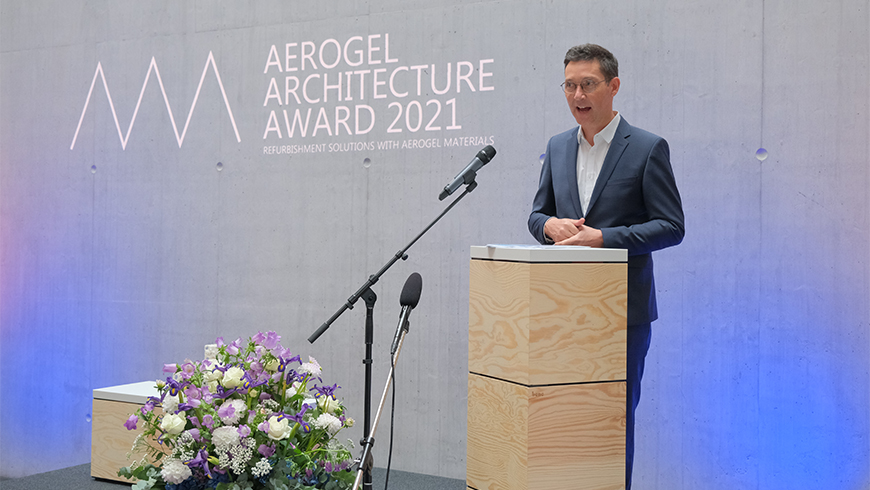 Newswise — The winner of the Aerogel Architecture Award is Swiss architect Michael Ledermann from Langenthal. His careful renovation of an old mill building in Madiswil in the canton of Bern convinced the experts. "This is a building any of us would have loved to live in," said architect Beat Kämpfen on behalf of the jury. The 17th-century building has already undergone numerous renovations and had been brought up to date time and again. The last renovation took place in the 1980s. Since then, the upper floor of the house had been heated with an electric storage heater; the 300-square-meter main room of the mill, with its quarry stone walls up to 70 centimeters in width, was unheated and could only be used on a few days a year.

Conversion of an old industrial building

Ledermann insulated the interior walls of the first floor with aerogel plaster, preserving the undulating wall structure of the quarry stone wall. Now protected from moisture from the old masonry, the space is both warm and dry and can be used year-round as a dining room and living room with a built-in kitchen. "The project of the mill building in Madiswil is a good example of the outside use of (pre)industrial buildings – a topic that still has to be considered a "mainstream" of contemporary monument preservation," says jury member architect Manfred Wehdorn.

Because of the very close ranking, the jury decided not to award a third prize, but to award second prize twice.

One of the awards went to architect Verena Klar, who proposed an energy efficiency design of a listed Biedermeier house in Tübingen dating from 1829 to make it more energy-efficient. The house is located on Neckarhalde in Tübingen, in the middle of a listed urban ensemble. The exterior façade had been left largely unchanged, so the aim was to build up the thermal insulation as slimly as possible so as not to cover up the appearance of the house and also the ornamentation on the façade and window reveals. "The client was quickly convinced, but the historic preservation authority remained skeptical for a long time" reported the architect. Finally, the authority was convinced with the help of several successful aerogel renovation projects from Switzerland. The craftsmen were enthusiastic about the easy workability of the aerogel plaster.

The living spaces of the house in Tübingen are now also thermally insulated all around from the attic and the basement ceiling and meet the German environmental standard "KfW Effizienzhaus Denkmal". A pellet heating system provides sustainable heat. "This project is convincing due to the insulation of the half-timbered facade and the preservation of the historic substance in a historically significant environment. It is a good example that even half-timbered houses can be operated economically in the future," says jury member Volker Herzog.

A difficult case in Weimar

Another second prize went to architect Jörg Hofmann from Weimar, who designed a renovation of a building at the Bauhaus University in Weimar to make it more energy-efficient. The research building had been erected in 1958 and is considered an outstanding example of Socialist Modernism; it is a listed building. The poorly insulated facade showed severe weathering damage, and the building also had to be renovated while it was still in use. Interior thermal insulation was not feasible because it could have damaged expensive research equipment. In Weimar, too, the historic preservation authority demanded a plaster finish in keeping with the original structure: the building's plinth cladding and eaves profile of concrete blocks were not to be overarched.

Architect Jörg Hofmann began researching, found the aerogel insulating plaster and first tried it out on his own house. The now completed renovated research building of the Bauhaus University has kept its face, and the requirements of the monument protection authority have been met. The U-value of the walls was nevertheless reduced from 1.36 W/m2K to 0.58 W/m2K, and the dew point of the facade and the existing component connections was also optimized.

The Aerogel Architecture Award was launched in 2020 by Empa and the industry partners Fixit, Agitec, Haga AG Naturbaustoffe and Hasit and the AdvaPor association. For the 2021 elimination, five offices from Germany, Austria and Switzerland had submitted their projects. A jury consisting of the four architects and monument conservation experts Ralf Kilian (Germany), Beat Kämpfen (Switzerland), Volker Herzog (Germany) and Manfred Wehdorn (Austria) evaluated the submitted projects with regard to their monument conservation value, energy efficiency and the originality of the chosen solution.

According to current plans, there will be further Aerogel Architecture Awards in the coming years. "The award should help to make the possibilities offered by aerogel insulation materials in monument protection and refurbishment of existing buildings widely known in the architectural and civil engeneering scene," says Michal Ganobjak, the organizer of the award ceremony.