Holiday Travel: Thanksgiving Could be Worst Travel Day of the Year 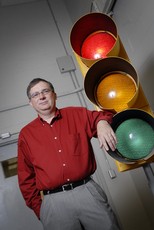 Dr. Allen Parrish offers a peek at peak travel, advice on the best time to travel and how weather affects holiday travel, whether GPS systems improve driving safety, and more

Newswise — A recent University of Alabama study shows the fifth worst day for crashes within the state in 2007 was the Wednesday before Thanksgiving. These results are in sharp contrast to UA's CARE Research & Development Laboratory's previous annual studies of holiday crashes with special emphasis on Thanksgiving.

Two factors likely contributed to the 585 crashes that occurred in Alabama on the Wednesday before Thanksgiving, in contrast with the 196 crashes occurring on the Thanksgiving holiday itself, the study indicated.

First, during 2007 there seem to be fewer people taking off early in the week, indicated by significantly fewer crashes occurring on Monday and Tuesday of Thanksgiving week.

Second, further analysis indicated that in 2007 the weather was rainy on the Wednesday before Thanksgiving, with almost 50 percent of the crashes occurring in rainy weather. Comparatively, less than 10 crashes occurred statewide in the rain on Monday and Tuesday.

"This is definitely a time to be avoided on the Wednesday before Thanksgiving, especially if bad weather is a possibility," said Dr. Allen Parrish, professor of computer science and director of the CARE Research & Development Laboratory at UA.

"There is obviously a large concentration of people on the road who are not nearly as familiar with their routes as commuters," said Parrish.

The best day of the week to be on the road is Thanksgiving Thursday. The actual holiday had about one-third of the crashes that occurred on Wednesday, a reflection that most road travelers have already reached their destinations at that point.

Since people's return from their holiday trip is spread over the long weekend, there is no concentration on the return to cause anything as dangerous as the Wednesday pattern, according to the researchers.

Areas of the state showing significantly more crashes in 2007 than in previous (2003-2006) years include the Auburn, Decatur and Huntsville areas. Areas with the greatest reductions of crashes in 2007 include Mobile and Birmingham, as well as the rural areas of Baldwin and Jefferson Counties.

Parrish offered a few safety recommendations for road traveling during the holiday:

Be acquainted with traffic problem areas and avoid them Do not drive while intoxicated, do not ride with others who are intoxicated, and avoid the obvious times and places where you might become the victim of drunken driving Always wear your seat belt, regardless of how long the trip Keep children properly restrained in the back seat Watch the weather reports, and plan your trip accordingly "Driving does not have to be dangerous," said Parrish. "If you keep these safety basics in mind, you will cut your chances of being killed to a probability very close to zero."