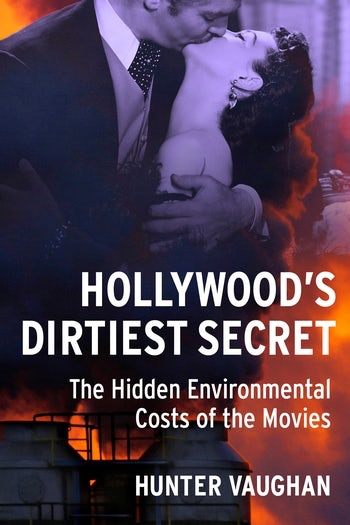 Newswise — With the Academy Awards around the corner, moviegoers and critics are busy scrutinizing the costumes, sets and performances of this year’s cinematic stand-outs.

When film scholar Hunter Vaughan watches a movie, he considers something else: How big of a toll did it take on the environment?

“I want to provide a counter-narrative to the typical story of Hollywood that looks at it not in terms of grandiose romanticization of the silver-screen, but through the hidden environmental tolls—the natural resource use, the waste production, the greenhouse gas emissions—that are seldom talked about,” says Vaughan, an environmental media scholar-in-residence in the College of Media Communication and Information (CMCI).

Vaughan’s new book, Hollywood’s Dirtiest Secret: The Hidden Environmental Costs of the Movies, does just that, shedding light on a wide range of surprising ecological villains, from the 1939 epic Gone With the Wind—which ignited Hollywood’s polluting love affair with explosions—to the 2009 sci-fi Avatar, an ostensibly eco-friendly digital pioneer that generated mountains of real-world waste.

Vaughan found inspiration for the book when he was a doctoral student at Oxford in England. Walking home at night he noticed a blinding glow emanating from a window. When he peeked inside, he found a building full of humming generators, snaking electrical cords and glaring lights—all set up for a practice run-through of a scene in the 2007 fantasy The Golden Compass.

“I was shocked and disturbed by the amount of resources being used just for a run-through,” he recalls.

In the coming years, he scoured through film archives and directors’ reports, toured studio lots and interviewed execs and local film crews.

He discovered an industry culture in which extravagance and waste have been not only allowed but celebrated, even as other industries have been pressured to conserve.

During the filming of Gone With the Wind amid lingering economic depression and scarcity, the filmmakers lit mounds of sets from previous films (including King Kong) ablaze for the epic “burning of Atlanta” scene, sending a plume of potentially hazardous smoke into the Los Angeles sky.

For Gene Kelly’s classic dance scene in the 1952 musical Singin’ in the Rain, producers ran countless gallons of water for a week on a backlot at MGM. When they realized they were starting to lose water pressure around 5 p.m., as residents of nearby Culver City got home from work, they altered their schedule to run the water sooner.

“They knew that water was a resource of the commons and that it was finite, but rather than conserve it, they just ran it earlier,” he notes.

Such waste did not abate with the coming of the environmental movement.

In 1997, during the filming of the box-office smash Titanic, wastewater from the lavish set on the shore of a Mexican village polluted the nearby ocean, decimating the local sea urchin population, reducing fish levels by a third and taking a heavy toll on the local fishing industry. Three years later, during the filming of the drama The Beach, also starring Leonardo DiCaprio, film crews uprooted local flora on Phi Phi Leh island in Thailand, destroying dunes that served as a natural barrier against monsoons and tsunami. The subsequent boom in tourism related to the film took such a toll on the coral reefs that the government suspended tourism there.

The truth about digital

Then there was Avatar.

“Avatar is problematic on so many levels,” says Vaughan.

A cautionary tale of the dangers of unbridled resource use, the 2009 production billed itself as entirely digital—a filmmaking method described as less resource-intensive than shooting live action. But Vaughan’s research revealed that the filmmakers produced entire real-life sets and wardrobes anyway, to get a better sense of how bodies and fabrics might move in the digital world of Pandora.

Our increased reliance on digital technology for entertainment comes at its own ecological cost, Vaughan stresses, with fiber-optic cables strung along the ocean floor, satellites and cell towers built to transmit signals and the benign-sounding “cloud” made up of server farms gobbling up energy around-the-clock. While Netflix deserves kudos for its socially progressive content, he notes, it uses inordinate amounts of server space (and associated energy and coolant), and a built-in interface which automatically starts the next show once the previous show is finished exacerbates its waste.

Award ceremonies like the Academy Awards and Golden Globes, with their lavish, wear-only-once gowns, $10,000 gift bags and private jets, also have an impact.

"They take a massive toll, both materially and symbolically," he says.

In all, research has shown, the film industry is on par with the aerospace, apparel, hotel and semiconductor industries when it comes to energy use and emissions.

But the news is not all bad, stresses Vaughan.

Some studios have vowed to go carbon neutral, and actors like Mark Ruffalo, Matt Damon, Shailene Woodley and Jane Fonda are taking genuine and public steps to fight for cleaner air, water, land and environmental justice.

Vaughan is also doing his part.

With a grant from the UK-based Arts and Humanities Research Council (AHRC), he’s working to build a Global Green Media Production Network to facilitate eco-friendly production from East Asia to Latin America.

What can moviegoers do?

Start by asking yourself some tough questions, he writes: Would you accept the extinction of a species in exchange for your favorite movie? How many downed trees’ or highways’ worth of carbon output is it worth?

“Filmgoers can choose not to endorse movies that rely on a spectacle of explosion, materialism and waste, and they can use social media to draw attention to their choices,” he says. “If we as an audience show Hollywood we want a certain type of film, they will start making them.”