Research from Wellesley College professor Heather Mattila shows that bees use animal dung to prevent giant hornets from attacking colonies, a behavior documented by scientists for the first time. 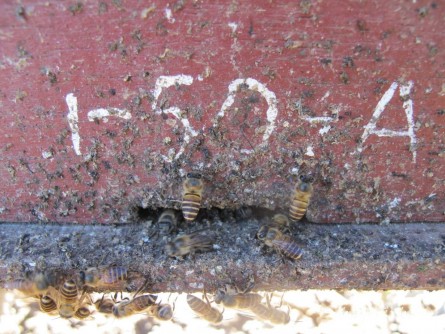 Honey bees apply animal feces to the entrance of their hive. This phenomenon, called fecal spotting, defends the hive against attacks from giant hornets.

Newswise — For the first time, honey bees (Apis cerana) have been documented using tools, specifically animal dung, to defend their colonies in Asia. This phenomenon is the focus of new research from Wellesley College associate professor of biological sciences Heather Mattila and her colleagues, whose findings were recently published in the journal PLOS ONE.

Mattila and an international team of researchers observed that to defend themselves against giant hornet (Vespa soror) attacks, which can wipe out whole colonies, honey bees forage for animal feces and apply spots of it around their nest entrances. Giant hornets were repelled by feces-covered entrances, limiting their ability to mount deadly group attacks.

Called fecal spotting, this unique use of dung as a defensive tool—a behavior that had not previously been seen from any honey bee species—is a response to the tremendous predatory pressure honey bees face when confronting giant hornets.

“Not only have we documented the first example of tool use by honey bees in nature,” Mattila said, “but the act of foraging for feces itself is another first for honey bees.” Honey bees routinely forage for materials produced by plants (such as nectar, pollen, and resin), but have not been known previously to collect solid materials from any other source. They occasionally collect fluids from animal waste, which can provide them with needed salts, but this is the first time they have been seen collecting solid pieces of dung, carrying it home with their mouthparts, and applying it to the entrance of their nests.

“Many scientists disagree over whether certain animals, let alone insects, use tools,” said Gard W. Otis, professor of environmental science at the University of Guelph in Ontario, Canada, and one of Mattila’s co-authors. “To qualify as tool users, animals must meet several criteria, including using an object from the environment—in this case, dung. The bees clearly use the material to alter the hive with purpose, in addition to meeting the requirements of holding or manipulating the tool.”

Mattila and her fellow researchers have studied interactions between giant hornets and Asian honey bees in Vietnam for over seven years. They conducted their fieldwork in apiaries with colonies that are managed by local beekeepers and housed in wooden hives. Once they confirmed that Asian honey bees collect animal dung, the team began their experiments by cleaning the front of the hives and then tracking how the bees built up their defenses through fecal spotting in response to attacks by giant hornets. They also showed that Asian honey bees did not use this animal dung defense against smaller, less deadly hornet species.

Mattila found that the bees’ behaviors decreased the severity of attacks by repelling giant hornets from nest entrances, where they focused their attacks. “We documented that hornets were less likely to land on entrances or chew their way into hives when there were more fecal spots around entrances,” Mattila said. “While further research is needed to determine exactly what properties of animal feces repels the hornets, the barrier the bees create is an effective defense against their attacks—a chemical weapon of sorts. What is also interesting is that the bees themselves are not repelled by the animal feces.”

This research has implications beyond Vietnam: Recently, a similar species of giant hornet known as “murder hornets” (Vespa mandarinia) was unintentionally introduced to North America, and has potentially established populations in Washington and British Columbia.

Honey bees in North America already face a range of threats, including poor nutrition, pesticides, pathogens, and habitat loss. Adding a lethal predator to the list could be devastating. Mattila says North American honey bees lack the impressive defensives that Asian honey bees have evolved to fend off giant hornets, making them easy targets. “Our study highlights the extent to which honey bees need to defend themselves against giant hornets. If giant hornets become established in North America, the threats that honey bees face will become further exacerbated,” she said.

Funding for this work was provided by the National Geographic Society Committee for Research and Exploration, the Vietnam Academy of Science and Technology, and Wellesley College’s Knafel Chair in the Natural Sciences and the Summer Research Program.

Mattila and her colleagues are currently exploring how the Asian honey bees sound the alarm when giant hornets attack, using recordings they made during this study. While international fieldwork is difficult due to the pandemic, the team is sending hornet samples to collaborators around the world to learn more about how hornets mark colonies for attack.