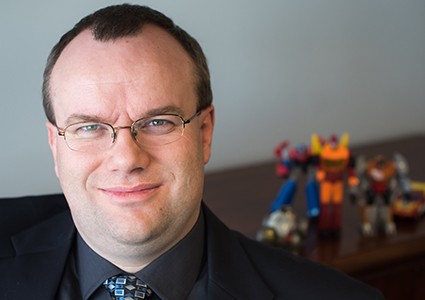 Newswise — Dr. Peter Harms enjoys the dark side of human behavior. The Culverhouse assistant professor of management likes it so much that his recent research delves into understanding the behaviors portrayed by leaders shown in movies like “Horrible Bosses” and “Horrible Bosses 2.”

In his research, Harms exams three types of leaders in the workplace—the narcissist, the Machiavellian and the psychopath—much like the characters of Jennifer Aniston, Collin Farrell and Kevin Spacy in the two “Horrible Bosses” movies.

“One thing we find again and again is that 50 to 70 percent of workers identify the worst part of their job as their immediate supervisor,” says Harms.

Harms has become the expert who media and companies call to understand negative workplace behavior, especially in leaders. The New York Times even turned to Harms for help defining a slightly erratic candidate during the spring presidential primaries.

“For the vast majority of people, if you say ‘Who is Peter Harms?’ the first thing comes up is, ‘He’s that dark side guy,’” he explains. “This is the stuff that’s been on CNN, BBC, Forbes and all over.”

After 18 years of research—with his work published in the prestigious Journal of Applied Psychology and The Psychological Bulletin among others—Harms says his niche goes beyond just dark side behaviors.

“There are so many ways to be bad,” he says. “I’m exploring why people are bad—do they think they’re doing the right thing because they don’t know the right thing or are they really trying to hurt people? I’m studying not only what they do, but why they do it.”

The problem, inevitably, starts by being the leader—at the helm or in a higher position to influence and intimidate those below. “Leaders have huge amounts of autonomy at a business,” says Harms, hitting on one problem area. “For instance, they can call you a name and you can’t retaliate. They can give you bad schedules, a bad sales district, take away privileges or even fire you. You rarely have the opportunity to do the same thing in return.”

“Autonomy really reveals who you are as a boss,” he continues. “If you’re fundamentally a good person, you'll tend to use your power in a benevolent way, but if you possess these dark traits, you end up leading in a malevolent manner. These dark impulses—jealousy or paranoia or even the need to micro-manage—are magnified when people get into positions of power.”

Another source of concern may stem from unrealistic expectations on the part of society in general.

“We tell leaders they have to be excellent, they have to be MLK or FDR,” explains Harms. “We set the bar too high and make it hopeless because 99 percent of people are not going to perform. Too often we make leaders feel like failures and they give up trying to improve. But the vast majority of us are extraordinarily average, so it makes more sense to aspire to be ‘good enough.’

If you can just not hurt the people around you you’re way ahead of the game in managing.”

Without ‘the good enough’ philosophy in the workplace, we continue to suffer the bullies, the tyrants, the manipulators, the credit-takers, and the secret-keepers. They’re the narcissists, the Machiavellians, the psychopaths among us, practicing their art at our frequent expense.

“Some of these traits can be used effectively. The danger comes when leaders use these traits too much,” Harms says. “We talk about the happy medium and knowing when the dark side characteristics can or should be used—a little is not always a bad thing.”

When he stands before his classes of millennials at the University of Alabama, the subject of the dark side comes up, if only to reassure students.

“There are a lot of people who call them the worst generation,” says Harms, disagreeing. “The one thing I want to tell them is that every generation has been thought to be the worst by its elders. People thought Elvis was the personification of a morally corrupt society and now his house is a shrine.”

It’s all about timing and maturity—and creating an awareness of the dark side traits to temper as the students grow.

“Things like going to work, staying employed, being responsible and learning to work with others, are all parts of improving ourselves in terms of character,” Harms tells his students. “If we can do those things, we eventually stop manifesting the traits. We learn to be good team members, how to lead and how to put others before ourselves. It’s important for our students to hear this.”

THE DARK SIDE DEFINED

The negative traits Dr. Peter Harms sees as dark downsides in the workplace (and rampant in movies like Horrible Bosses) include:

Narcissistic: Armed with obnoxious self-esteem. The I-love- myself-a-lot feeling that must put others down in order to be sustained. Narcissists excel in job interviews (talking about themselves) and are good at pitching ideas and engaging with new people.

Machiavellian: Love to manipulate. They take pleasure, for instance, in lying to you so you look like a fool. Theirs is a cynical work view. While they’re good at negotiating, these very clever individuals are in it for themselves.

Psychopaths: Impulse control issues. They’re risk takers, neverm stopping to assess a situation before jumping in. The word“consequences” is foreign. Psychopaths tend to be the most dangerous of the three.

Could your next possible team member be a narcissist? A controlling Machiavellian? A dreaded psychopath?

“Seth Spain, one of my frequent collaborators, suggests that the most revealing test is to look at how your candidate treats a server in a restaurant,” says Harms. “When a person has power and authority over another, does he or she offer kindness and dignity, or act superior and treat the server badly? That’s a revealing moment.”