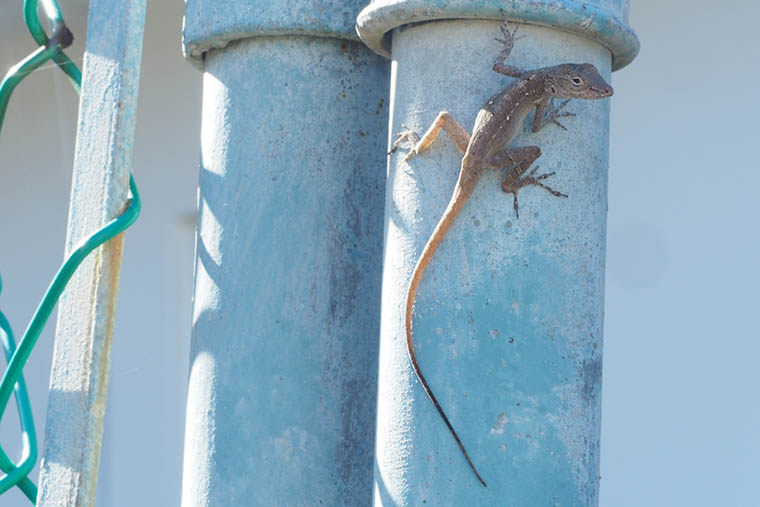 Newswise — Faced with a gritty landscape of metal fences, concrete walls and asphalt pavement, city lizards in Puerto Rico rapidly and repeatedly evolved better tolerance for heat than their forest counterparts, according to new research from Washington University in St. Louis and the University of California, Los Angeles.

Studies that delve into how animals adapt in urban environments are still relatively rare. But anoles are becoming a model system for urban evolutionary research.

“Urban lizards are exposed to higher temperatures, consistent with the urban heat island effect,” said biologist Kristin Winchell, postdoctoral research associate in the Losos laboratory in Arts & Sciences. “We found that they are able to maintain their function at temperatures of about 0.82 degrees C (or 1.47 F) higher on average across all populations.”

In one population in this study, urban lizards were able to go about their business in temperatures above 40 C (104 F). That’s a lot of heat for a tiny animal — one that measures about 5 centimeters long, not including its tail.

“Better heat tolerance can make all the difference in an urban habitat,” Winchell said. “Whether it’s being able to stay active during longer parts of the day or being able to occupy perches that reach higher temperatures, it expands their niche space.”

This adaptive thermal response is even more interesting because only those lizards that grow up in the city seem to be able to tap into it — an example of natural selection favoring trait ‘plasticity,’ researchers said. The study is published March 9 in the journal Nature Ecology & Evolution.

In previous work, Winchell showed that city lizards have evolved longer limbs and larger toepads with specialized scales. Both of these traits allow them to more effectively and quickly traverse urban habitats, allowing them to climb up smooth, painted walls.

Compared with these adaptations, thermal tolerance is a relatively complex trait. It affects multiple body systems and involves potentially hundreds of genes. And cold-blooded animals like these lizards also have the option to behaviorally regulate temperature — for example, by shuttling in and out of sun, or by changing the time of day when they hunt or look for mates.

Winchell’s partner for this effort, Shane Campbell-Staton, assistant professor at UCLA, is an expert at sussing out genomic aspects of thermal adaptation.

“A big part of this story is that the target of selection in urban heat islands is plasticity, the ability of an individual to respond adaptively to its environment,” Campbell-Staton said. “Individuals that are high responders — that is, those that can become more heat tolerant when raised in cities — are favored by natural selection. The major difference is that the adaptation only appears when an individual is born and raised in a city environment.

For example, when Winchell’s previous work showed that lizards with long limbs do better in cities, those individuals would have longer limbs no matter where they are raised.

“In contrast, differences in heat tolerance are hidden in a forest habitat and only show themselves when the proper genes are exposed to warm temperatures,” Campbell-Staton said. “It’s kind of like a hidden superpower that only presents itself in the right environment. We are only just beginning to understand how natural selection works on this type of trait to influence the process of evolution.”

The ability to withstand more heat anytime, anyplace, is potentially a game changer for Anolis cristatellus, the most abundant and visible species in urban environments of the 10 kinds of lizards that are found across Puerto Rico.

Winchell and her team studied 150 lizards from four municipalities across the island, including the capital San Juan. Each of these locations was part of a paired site: with one lizard collection area in the city, and the other in a nearby forest. The researchers also brought back some of the lizards to a laboratory setting at the University of Massachusetts Boston, where Winchell was a graduate student at the time.

The scientists relied on an established lizard research protocol that tests thermal tolerance as a measure of a lizard’s ability to right itself after being placed gently on its back. The researchers raised the temperature by small increments, and the trial ended when a lizard took too long to right itself. After the tests, a cool water bath helped bring the lizards comfortably back down to normal temperatures.

Even more interesting, the researchers discovered a single gene variant that differed consistently between the city and forest populations — one that was associated with differences in thermal tolerance. The researchers believe that this indicates natural selection is selecting for the ability to respond to higher temperatures when needed, what they refer to as a ‘high-plasticity genotype.’

“One of the unique and exciting things for me about this study is that we’re able to simultaneously address this question about the repeatability of evolution at several different levels of biological organization,” Campbell-Staton said.

“Starting at the whole organism level, we clearly see that urban lizards are able to maintain functioning at significantly higher temperatures than their forest counterparts.

“Then, when we look at all the genes that are being differentially expressed, we see pretty high repeatability in how those large suites of genes are changing as well,” he said. “But if you zoom in even further, we found not only a single gene, but what seems to be a single polymorphism that is repeatedly under selection in these urban heat islands as well, which is fascinating.”

By studying how animals adapt to different habitats, like life in the city, researchers have a unique opportunity to investigate traits that are environmentally dependent but influenced by an animal’s genetic makeup.

That dynamic is part of why Winchell says she is partial to A. cristatellus, which is abundant in urban areas not only in Puerto Rico, but outside of their native range in the southern United States and other parts of the Caribbean.

“I like to say they are urbanophilic, or urban-loving species,” Winchell said. “There are other terms that people use, like urban tolerant or urban-adapting. But I think urbanophilic captures it best. They’re exploiting novel niche space that isn’t present in the forest environment. But they’re not reliant on humans. If humans went away, they would still do fine.”