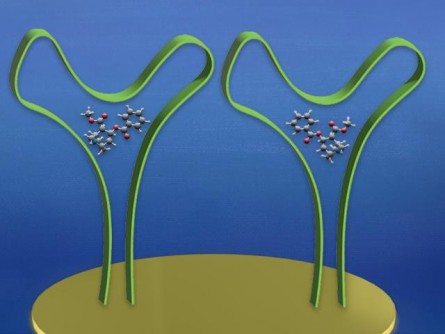 Representation of an aptamer, a long amino-acid sequence, designed to capture a drug molecule which causes the aptamer to drastically change the shape and thus detect the molecule.

Newswise — UNIVERSITY PARK, Pa. — Rapid, accessible and highly accurate detection of addictive substances such as opiates and cocaine is vital to reducing the adverse personal and societal impacts of addiction, something current drug detection systems can take too long to provide. However, on-site, real-time monitoring of abused drugs in a patient’s system could alert clinicians before dangerous levels are reached, and such an approach may not be far away.

Drug detection methods for addiction patients are slow-moving and not nimble enough because of the complexity of the current system, according to Slava V. Rotkin, Frontier Professor of Engineering Science and Mechanics with an appointment in the Materials Research Institute, at Penn State. Rotkin is a co-author of a review paper in the nanotechnology journal Small that posited a possible solution: biosensors.

“The first goal of our review paper is to draw attention to the problem so someone working in drug prevention can access hundreds of references,” Rotkin said. “The second goal is because review papers are typically read more often than the original paper, we hope that we can reach a larger audience of both researchers and the general public via media attention. And we present biosensors as a possible solution.”

Statistics demonstrate the medical importance of improved and more rapid drug detection in the human body. As per the CDC, drug overdose deaths have increased 137% in the period between 2000 and 2014, including a 200% increase in overdose deaths involving opioids such as opioid pain relievers and heroin.

One of the key tools to fighting this epidemic of addiction is drug detection in users, said the researchers. The classic lab-based method of monitoring the presence of drugs in the blood or urine of patients, which ranges from simple chemical color tests like thin-layer chromatography to more complex methods such as gas chromatography-mass spectrometry, are reliable and accurate. However, they require samples to be sent off-site, which is a time-consuming and expensive process. A fast, less expensive, and more-constant method of monitoring possible drug use could alert practitioners before their patient overdoses.

"If the analysis is very expensive, then you are going to limit how often you do the analysis,” Rotkin said. “It needs to be cheap, effective and simple. As simple as possible, because you need to take the blood sample from the patient, and then you must clean the blood, prepare the samples and take an hour of a specialist’s time at a remote lab. This can cost a lot of money and therefore you wouldn't go for regular analysis unless it's very, very necessary. But for addiction, you should do it more frequently, just because the problem is so acute.”

In the review paper, the international team of researchers including Rotkin listed 203 references to a large body of research papers that indicate that biosensors hold a lot of potential to meet these challenges. Biosensors could potentially solve this issue by providing a high-sensibility, low-cost analysis of a patient on a continual basis. A biosensor device includes a small sensor that is exposed to a biological material and produces a chemical, optical or electrical signal in response to biostimulus. The design of these biosensors has evolved significantly over the last two decades, and have appeared in the market in the form of over-the-counter glucose sensors for diabetic patients and home pregnancy tests. However, for the type of sensors needed for drug detection, Rotkin and his co-authors note that there is a problem: size.

"Based on what we currently have in biosensors, we are like how it was back in the early 1990s with cellphones,” Rotkin said. "We were using these huge mobile phones that would be about the size of the normal landline phone at the time, and you needed a bag to carry it.”

The use of nanomaterials hold promise, and could potentially enable a biosensor for detection of opiates and cocaine that would be small enough to include in a bandage. The nanomaterials would provide a platform for bioreceptors and provide a “nanoarchitecture” on which build highly sensitive, rapid and small-sized detection devices.

The review paper proposed aptamer-based sensors for drug detection. Aptamers are short sequences of either RNA, DNA or peptides. Aptamer molecules can be engineered specifically as recognition elements for biosensors. Properties such as a very small size, fast and low-cost production process, biocompatibility, and high stability make them ideal for such a biosensor.

“In the paper, we described all existing technologies, and weighed the pros and cons,” Rotkin said. “This includes the huge number of sensors that currently exist based on electrochemical detection, which are extremely simple and cheap. But because of its robustness, meaning it can detect anything, then the question is can you be selective and make it specifically focus on what you want to detect. Here the aptamers, that are engineered to be selective, are to help.”

Among the other technologies they examined included optical sensing, which works based on the alteration of optical properties by a stimulus that generates a signal proportional to the concentration of a substance or its optical “fingerprints.” Rotkin collaborates with the researchers at the University of North Carolina-Greensboro on such devices using heterostructures of 2D materials.

The authors of the review paper concluded that the major hurdles to overcome to create such small, wearable biosensors for addiction patients include the need to improve the reproductivity of the biosensors, especially when analyzing complex sample mediums, and the ability to produce a sensor that does not require the pretreatment of samples to analyze them. In addition, the authors concluded that more funding is needed to develop marketable biosensors with low price and the correct analytical parameters.

"You need an appropriate amount of funding to for this marketable biosensor to happen,” Rotkin said. “And that’s always a challenge. So, myself and my fellow authors hope that maybe when people see this review, it will allow them, in one paper, to see what people have done. Perhaps they can follow through on one of the researched sensor types and go forward until we get the real product.”

The paper’s authors posited that biosensors for personal and on-site abused-drug monitoring could appear in the coming decade.

“This is not something that everyone can do in their own lab, so it would take a while to create a finished product,” Rotkin said. “And then you need FDA approval, which takes another year or so, and then you have to manufacture it. I would estimate that the whole cycle may take up to 10 years. Maybe it can be developed and marketed via a spin-off company created at the University, and it so happens that we have an incubator right here — Invent Penn State.”

Other authors of the paper include, from Khazar University in Azerbaijan, Rasoul Moradi, assistant professor of chemical engineering, and Nazila Pour Khalili, researcher; from the Bandung Institute of Technology, Ni Luh Wulan Sepitiani, research assistant in engineering physics; from Taipei Medical University, Chia-Hung Liu, assistant professor of urology; and from the National Institute for Materials Science in Japan, Esmail Doustkhah, researcher, and Yusuke Yamauchi, laboratory head.