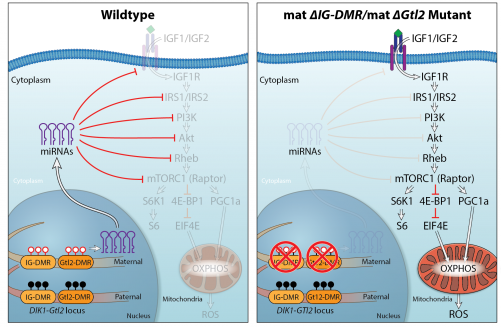 The research focused on imprinted genes—genes “stamped” according to whether they are inherited from the mother or father. With imprinted genes, one working copy, or allele, is inherited instead of two. Either the copy from the mother or father is inactivated or “silenced.” Typically, the paternally inherited allele’s expression promotes growth, while the maternally inherited allele’s expression suppresses it.

The researchers found that when the Gtl2 locus is expressed from the maternally inherited allele, it produces non-coding RNAs to curb metabolic activity. Mechanistically, Gtl2’s “megacluster” of microRNA, the largest cluster of microRNA in the mammalian genome, suppresses the mTOR signaling pathway and downstream mitochondrial biogenesis and metabolism, thus blocking mitochondrial-associated byproducts called reactive oxygen species (ROS) that can damage adult stem cells.

“Reactive oxygen species are like the potentially harmful byproducts that come from industrial manufacturing,” says Li. “ROS are unavoidable derivatives of the mitochondrial metabolic process and need to be managed by the cell,” he explains.

Hematopoietic stems cells renew themselves and differentiate into other cells, including white blood cells, red blood cells, and platelets, constantly renewing the body’s blood supply in a process called hematopoiesis. Because of their extraordinary transformative qualities, the transplantation or transfusion of isolated human hematopoietic stem cells has been used in the treatment of anemia, immune deficiencies, and other diseases, including cancer.

An upset in that balance can cause cells to grow abnormally and lead to disease. Abnormalities in the Gtl2 locus on human chromosome 14q32.2 are associated with uniparental disomy in which an individual receives two copies of a chromosome from one parent and no copy from the other parent. Uniparental disomy may cause delayed development, mental retardation, or other medical problems. Differences in gene expression at the Gtl2 locus have also been linked to fetal alcohol exposure disorder.

But when working properly, the Gtl2 locus acts as a great protector of cells.“Most of the non-coding RNAs at the Gtl2 locus have been documented to function as tumor suppressors to maintain normal cell function,” Qian says.

Over the three-year study, investigators used transcriptome profiling to analyze 17 hematopoietic cell types and found that non-coding RNAs expressed from the Gtl2 locus are predominantly located in a subset of the cell types, including adult “long-term” hematopoietic stem cells which have long-term self-renewal capacity. In subsequent experiments, deleting the locus from the maternally inherited allele in hematopoietic stem cells increased mitochondrial biogenesis and subsequent metabolic activity as well as increased ROS levels, with the latter inducing cell death.

The finding opens the possibility for Gtl2 to be used as a biomarker because it could help label dormant (or reserve) stem cells in normal or potentially cancerous stem cell populations, Li says. The addition of a fluorescent tag to the Gtl2 locus could allow researchers to mark other adult stem cells in the gut, hair follicle, muscle, and neural systems.

Hematopoietic stems cells are essential to the healthy functioning of the human body. These cells renew themselves and differentiate into other cells, including white blood cells, red blood cells, and platelets, and constantly renew the body’s blood supply. The creation of new blood cells in the body, a process called hematopoiesis, requires a delicate metabolic balance that is not well understood. Stowers Investigator Linheng Li, Ph.D., and colleagues found that the genetic locus Dlk1-Gtl2 plays a critical role in protecting hematopoietic cells by restricting metabolic activity in the cells’ mitochondria. This discovery suggests that Gtl2 may be useful clinically as a biomarker to determine if cells are normal or potentially cancerous. The locus’ tumor suppression qualities also may lead to future treatments targeting cancer.