How Defeating THOR Could Bring a Hammer Down on Cancer 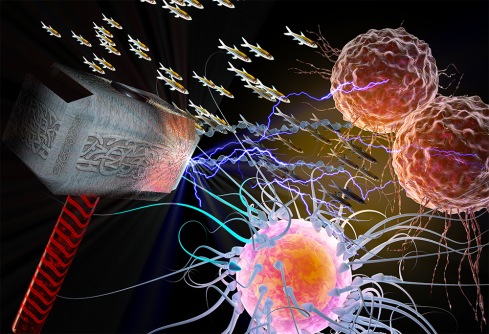 Newswise — ANN ARBOR, Michigan — It turns out Thor, the Norse god of thunder and the Marvel superhero, has special powers when it comes to cancer too.

They characterized a long non-coding RNA (lncRNA) that is expressed in humans, mice and zebrafish. It’s unusual for this type of RNA to be conserved throughout species like this. The team’s thinking was that if the RNA plays a role in other animals and species besides humans, it must be important.

“Genes that are evolutionarily conserved are likely important for biological processes. The fact that we found THOR to be a highly conserved lncRNA was exciting. We chose to focus on it with the thought that it has been selected by evolution for having important functions,” says Arul Chinnaiyan, M.D., Ph.D., director of the Michigan Center for Translational Pathology and S.P. Hicks Professor of Pathology at Michigan Medicine.

In fact, the researchers found this particular lncRNA plays a role in cancer development. And that knocking it out can halt the growth of tumors.

This is the first group to identify and characterize THOR, which stands for Testis-associated Highly-conserved Oncogenic long non-coding RNA. They published their results in Cell.

It’s an early example of how this previously unexplored portion of the genome could lead to a potential new way of attacking cancer.

In 2015, Chinnaiyan’s team published a paper analyzing the global landscape of lncRNAs, which had been considered dark matter because so little was known about it. They identified thousands of potential lncRNAs that might warrant future study.

THOR rose to the top of the list because it was evolutionarily highly conserved. It was also highly expressed, specifically in testes cells. It had little to no expression in other types of adult normal tissue.

Because THOR is highly conserved, researchers were able to study it in mice and zebrafish, as well as in human cells.

“That is one of the challenges of studying lncRNAs that are not conserved. If they’re not conserved in model systems, they are difficult to characterize. Here, because THOR is so highly conserved, we were able to look at its expression and function in zebrafish models,” Chinnaiyan says.

In addition to finding THOR expression in normal testis tissue, the researchers found it was highly expressed in some subsets of cancers, particularly lung cancer and melanoma. As they investigated THOR, they found its expression had a direct impact on cancer development. If they knocked down THOR in cell lines expressing it, tumor growth slowed. If they overexpressed THOR, cells grew faster. And when they eliminated THOR from normal cells, the cells continued to develop normally, suggesting it only impacts cancer cells.

“We’ve gone through a lot of lncRNAs to get to that. Most of the ones we test don’t have a clear function like this,” Chinnaiyan says.

Chinnaiyan suggests THOR could be a good target for drug development because blocking it does not impact normal cells. That would likely mean fewer toxic side effects. In future studies, the researchers will look at how to create a compound that binds with THOR in a complimentary sequence designed to knock it down. This approach, known as antisense oligonucleotides, has been used successfully in other contexts.

Disclosure: The University of Michigan will file a patent on THOR as a target and has filed a related technology disclosure around lncRNA diagnostics in cancer. Chinnaiyan, Hosono and Niknafs will be named co-inventors. Guo, Freier and Bui are employees of Ionis Pharmaceuticals, which may develop therapeutic compounds against THOR.