How Do Metals Interact with DNA? 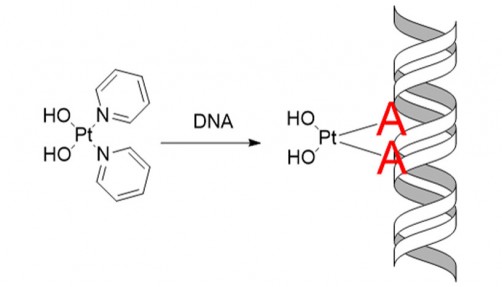 The drug Pt103 preferably attacks to the nucleobase adenine, one of the building blocks of DNA. 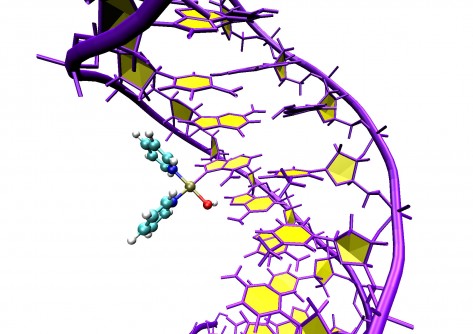 Computer simulations show the precise location of Pt103 in DNA.

Newswise — To fight cancer, every year thousands of chemical substances are screened for their potential effects on tumor cells. Once a compound able to inhibit cancer cell growth is found, it still takes several years of research until the drug gets approved and can be applied to patients. The elucidation of the different pathways that a drug takes within human cells, in order to predict possible adverse effects, usually requires elaborate and time-consuming experiments.

The teams of Leticia González from the Faculty of Chemistry of the University of Vienna and Jacinto Sá from Uppsala University have developed a protocol that is able to detect with high precision how, where, and why a drug interacts with the biomolecules of an organism. “In a first step, using high-energy X-ray radiation from the Swiss Light Source third-generation-synchrotron, the favorite binding location of the drug inside the cell is determined”, González explains. In a second step, advanced theoretical simulations, partially done on the supercomputer “Vienna Scientific Cluster”, rationalize the preference of the potential medicament for that particular location.

The scientists have applied this protocol to the drug Pt103, which is known to have cytotoxic properties but an unknown mechanism of action. The compound Pt103, which belongs to the family of the so-called platinum-based drugs, showed promising antitumor activity in previous studies. Until recently, scientists could only speculate on the action of the compound with the DNA found inside a human or cancer cell. “We could show that the drug binds to a specific site of DNA, which was not expected based on previous research. And we could also explain why the drug attacks this particular site.” says Juan J. Nogueira, a postdoctoral researcher in the group of González and co-author of the study. Using this newly gained knowledge one can better understand the functionality of the corresponding chemotherapeutic agent, which might lead to the development of new and more efficient drugs. 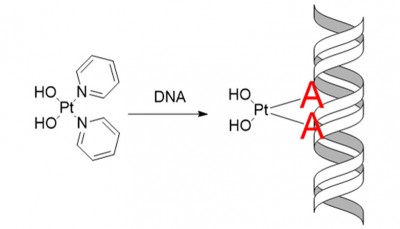 Caption: The drug Pt103 preferably attacks to the nucleobase adenine, one of the building blocks of DNA. 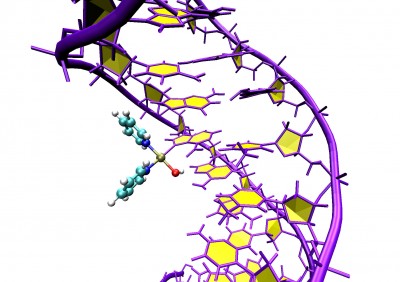