How Does a Cell Maintain its Identity During Replication?

14-Sep-2017 8:05 AM EDT, by Perelman School of Medicine at the University of Pennsylvania contact patient services
favorite_border 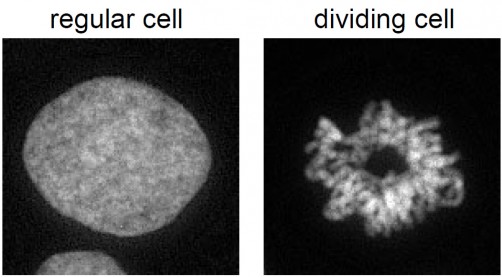 Newswise — PHILADELPHIA – Prior to cell division, chromosomes are seemingly a jumbled mess. During cell division, parent cell chromosomes and their duplicates sort themselves out by condensing, becoming thousands of times more compact than at any other time. Researchers have long assumed that genes become “silent” during cell division, not being transcribed into proteins or regulatory molecules. This has left open the question of how genes get properly re-activated after cell division. Now, researchers in the Perelman School of Medicine at the University Pennsylvania have found that gene expression actually continues during cell replication. Their findings are published this week in Science.

“We looked at this question from the point of view of answering what controls cell identity and how can we harness that for cell reprogramming – for instance, to stop cancerous replication or engineer a cell to steer the direction of its ‘personality,’ so to speak,” said senior author Kenneth S. Zaret, PhD, director of the Penn Institute for Regenerative Medicine and the Joseph Leidy Professor of Cell and Developmental Biology. “The set of genes a cell expresses determines if it’s a skin cell, nerve cell or a heart muscle cell, among the 200 or so different cell types found in the human body.”

Past studies in this area also sought to pinpoint the best time to intervene in order to change a cell’s fate. The current Science paper shifts to exploring how a cell goes from a quiet gene state to a fully active staff of genes and regulatory molecules that control the outcome of the entire cell’s identity.

First author Katherine C. Palozola, a doctoral candidate in the Zaret lab, is the first to find a way to look at gene activity in a living cell during division. Using a human liver cell line, she labeled the nucleic acid uridine (one of the four gene messenger building blocks) and followed it to see which genes were still active during replication.

“We were surprised that gene expression was still on – albeit at a low level – during replication,” Palozola said.

Although chromosomes are extremely compact during cell division, with sequences for regulatory molecules buried and previously presumed to be unavailable to be transcribed, Palozola found that most genes and their nearby regions that promote gene function are still actively expressed. She discovered how cells wake up after cell division and recall “who they are.” What ultimately drives cell differentiation are sequences of enhancer molecules located away from the gene they act on.

The laboratory of Gerd Blobel at the Children’s Hospital of Philadelphia had previously shown that these far-away modifiers “nap” during division, since it only lasts about 30 minutes – relatively quickly in biological terms – and come back online after a cell division cycle is complete. “The most amazing thing about this study is that in the end, we had to throw what we thought we knew about this basic aspect of gene regulation out the window,” Zaret said. “The findings indicate that we need to think about how promoters, rather than enhancers, are regulated during cell division. This refocusing will tell us how a cell’s identity, as defined by the genes it expresses, is retained through cell division. We hope it will improve our ability to deliberately change a cell’s identity to create new cells and tissues for therapeutics and research.”