20-May-2013 3:00 PM EDT, by Perelman School of Medicine at the University of Pennsylvania contact patient services 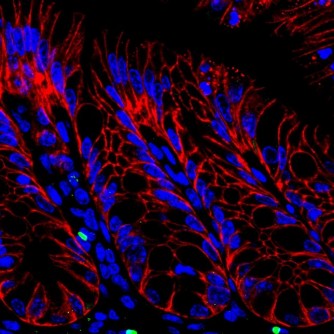 Newswise — PHILADELPHIA - The human gut is loaded with commensal bacteria – “good” microbes that, among other functions, help the body digest food. The gastrointestinal tract contains literally trillions of such cells, and yet the immune system seemingly turns a blind eye. However, in several chronic human diseases such as inflammatory bowel disease (IBD), HIV/AIDS, cancer, cardiovascular disease, and diabetes, the immune system attacks these normally beneficial bacteria, resulting in chronic inflammation and contributing to disease progression.

Now, researchers may finally understand an important mechanism that keeps this friendly truce intact – a finding that may lead to the development of new therapeutic strategies for such chronic diseases.

Gregory F. Sonnenberg, PhD, research associate in the Department of Medicine, Gastroenterology Division, and the Institute for Immunology at the Perelman School of Medicine, University of Pennsylvania, with postdoctoral researcher Matthew Hepworth, PhD, report in Nature that innate lymphoid cells (ILCs) directly limit the response by inflammatory T cells to commensal bacteria in the gut of mice. Loss of this ILC function effectively puts the immune system on an extended war footing against the good, commensal bacteria – a condition observed in multiple chronic inflammatory diseases.

ILCs are a class of rare immune cells that were first described a few years ago. Previous research has implicated these cells in regulating immune responses in the intestine, mostly through their ability to secrete immune-activating cytokines. But until now, researchers have had a hard time studying ILCs because it hasn’t been possible to selectively eliminate them in the context of an otherwise intact immune system.

Sonnenberg, Hepworth, and their colleagues deleted a protein called RORγt, required for one class of ILCs, in mice. RORγt-deficient animals had exacerbated T cell responses against commensal bacteria and systemic inflammation. In contrast, deletion of previously identified ILC effector cytokines such as IL-22 and IL-17 did not elicit an immune response to commensal bacteria, suggesting the ILCs use an unidentified regulatory pathway.

When the team looked at what gene signatures the RORγt-dependent ILCs expressed, they found high expression of major histocompatibility complex class II (MHCII) protein, which some cells use to display foreign proteins to the immune system and directly interact with T cells.

This study is the first to selectively target ILCs in the presence of an intact immune system, and these findings suggest that under normal conditions, ILCs play a critical role in dampening the anti-bacterial T-cell response using MHCII. Indeed, when Sonnenberg’s team looked at ILC activity directly, they found that MHCII+ ILCs could present foreign antigen to T cells and limit their expansion and pro-inflammatory properties.

Essentially, ILCs seem to instruct T cells to trust – that is, ignore -- commensal bacteria, thereby allowing the immune system to coexist with these foreign entities. Loss or dysregulation of ILCs, in turn, brought on by genetic or environmental factors such as diet or infection, for example, eliminates that protective action. This can lead to dysregulated immune activity and chronic inflammation.

Importantly, the study also identifies that MHCII+ ILCs are found in the intestinal tissues of healthy human donors. “Although it’s still early days for this line of research, these findings provoke the hypothesis that MHCII+ innate lymphoid cells may be an important pathway to therapeutically target in the treatment of some chronic inflammatory diseases,” suggests Sonnenberg. The Sonnenberg lab is now trying to establish if that is the case.