How much do we lie when we have sex on the brain? 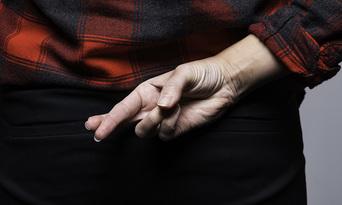 A new study shows the extent to which people will change their own opinions to conform to a stranger's, or lie about their number of past sexual partners, when the sexual systems of the brain have been activated. 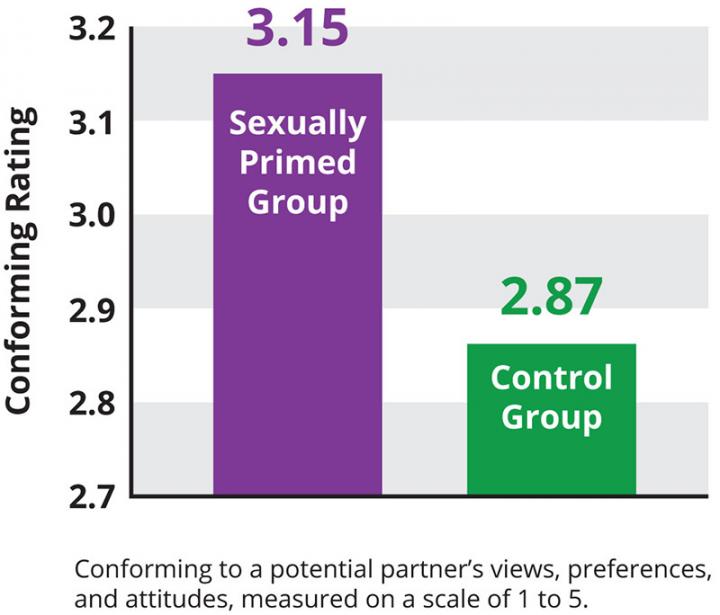 Conforming to a potential partner's views, preferences and attitudes, measured on a scale from 1 to 5. 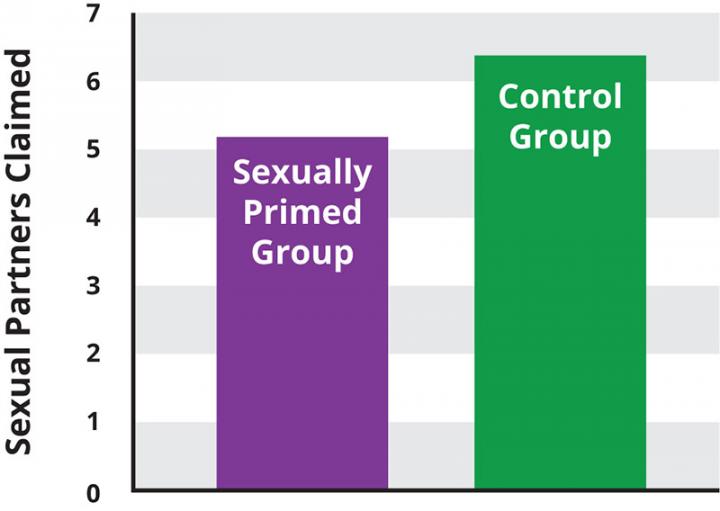 Newswise — In a world of seemingly endless opportunities for finding a mate, competition for a partner can be fierce. Not all that glitters is gold, as the old adage goes. If you've long suspected that people fudge the truth when it comes to presenting themselves to a potential partner, here's the research to back you up.

In a new study, published in the Journal of Experimental Social Psychology, two researchers from the University of Rochester's Department of Clinical and Social Sciences in Psychology and the Israeli-based Interdisciplinary Center Herzliya conclude that when the possibility of sex looms, people are more likely to change their attitudes and engage in deceptive self-presentation. In other words, they conform, embellish, and sometimes lie.

The duo of Gurit Birnbaum, a social psychologist and associate professor of psychology at the IDC Herzliya, and Harry Reis, a professor of clinical and social sciences in psychology and Dean's Professor in Arts, Sciences & Engineering at the University of Rochester, hypothesized that sexual thoughts--or, in the researchers' more precise terms, the activation of an individual's sexual system--would increase a person's efforts to manage first impressions, bringing with it deceptive self-presentation.

Sex on the brain

What laypersons might describe as having sexual thoughts, researchers refer to more precisely as the activation of the sexual system or sexual priming. The phrase, Harry Reis explains, "means getting people to think about things in a sexual way. Technically it means activating a certain set of concepts in the brain. So, the parts of the brain that represent sexuality are being activated. But that doesn't necessarily mean that people are getting genitally aroused."

They tested that hypothesis on 634 students--328 female and 306 male--with an average age of nearly 25, all identifying as heterosexual. Over the course of four studies, the psychologists exposed one group to sexual stimuli and the control group to neutral stimuli. Study participants, all students at an Israeli university, then interacted with an opposite-sex stranger.

Study 1 asked two study participants at a time to solve a dilemma faced by a fictitious third person--whether to accept a job offer abroad or to reject the offer to stay close to family and friends. Both participants were assigned one specific position--one for and one against the move abroad--to argue in a face-to-face interaction.

Afterwards, participants rated the extent to which they outwardly expressed agreement with the other participant's position during the interaction. Compared to participants in the control group (without prior sexual stimuli), participants who had been sexually primed were more likely to express agreement with a contrary opinion advocated by an opposite-sex participant. The researchers interpret this behavior as a strategy to make a favorable impression with the stranger, thereby increasing the likelihood of getting closer to this person.

Study 2 examined whether study participants would actually change their declared preferences to conform to a stranger's ideals. Participants were asked to complete a questionnaire that assessed their preferences in various life situations (such as "to what extent does it bother you to date someone who is messy?" or "do you like to cuddle after sex?"). Next, participants were subliminally exposed to either a sexual or a neutral picture prime.

Participants were then told they would be part of an online chat with another participant, who in reality was an insider--an opposite-sex member of the research team. They looked at an online profile that purported to present the insider's preferences on various subjects. After viewing the profile, participants were asked to create their own profile to be emailed to the other participant, and asked to complete their profile by rating the same items that had been presented in the insider's profile.

Studies 3 and 4 addressed whether participants would lie about the number of past sexual partners. The researchers hypothesized that people would reduce the actual number of partners so as to appear more selective--or less promiscuous--to a potential mate. To test the hypothesis, researchers had participants talk about the total number of sexual partners they had had during a chat with an attractive study insider. Then they were asked the same question in anonymous questionnaires to provide a true baseline for the researchers. The findings were clear: study participants who had been sexually primed were more likely to lie, reporting lower numbers of previous sexual partners to a potential mate compared to the group without sexual priming.

The researchers found that both men and women (all of whom were sexually primed) tended to decrease the reported number of past sexual partners when chatting with an attractive stranger. (By the way, around seven previous partners was the magic number that most people reported in their doctored answers).

Interestingly, Birnbaum and Reis, who have collaborated for decades (Birnbaum was a post-doctoral fellow in psychology at Rochester in 1998-99) have slightly different takes on what the findings ultimately mean.

"People will do and say just about anything in order to make a connection with an attractive stranger," says Birnbaum. "When your sexual system is activated you are motivated to present yourself in the best light possible. That means you'll tell a stranger things that make you look better than you really are."

But, says Reis, "a lot of it is not necessarily what you'd call a bald-faced lie. Even though it's clearly not the truth, it's a way of people finding ways to emphasize different parts of how they see themselves." And yet: "I think there's some degree to which it is finding ways to shade one's perception of the truth. It still counts as a lie, there's no question about that."

This research was supported by the Binational Science Foundation (BSF).

For more on Reis and Birnbaum's research, also read their previous studies on how sex can help initiate a new romantic relationship, why uncertainty in a potential partner's romantic intent dampens interest, and watch Birnbaum's TEDxVienna talk on why humans make sex so complicated.

Caption: A new study shows the extent to which people will change their own opinions to conform to a stranger's, or lie about their number of past sexual partners, when the sexual systems of the brain have been activated.

Caption: Conforming to a potential partner's views, preferences and attitudes, measured on a scale from 1 to 5.