How Much Seafood Did You Eat? Photos Jog Memory, Aid Scientific Recommendations

28-Mar-2018 8:05 AM EDT, by University of Florida Institute of Food and Agricultural Sciences
favorite_border 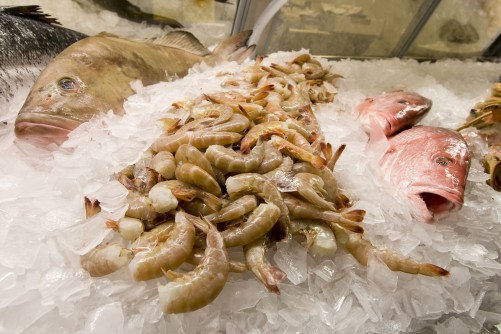 The photographic seafood portion guide worked well for 94 percent of participants, who chose their “typical seafood portion” photograph within 2 ounces of the actual plate of freshly cooked fish or shrimp they previously selected, said Anne Mathews, a UF/IFAS assistant professor of food science and human nutrition.

Newswise — GAINESVILLE, Fla. --- Seafood can be a tasty source of protein that supports a healthy, balanced diet. But too much of anything is not always beneficial, said Anne Mathews, a food and human nutrition scientist with the University of Florida Institute of Food and Agricultural Sciences.

To assess health risks versus benefits of consuming certain seafood products, scientists analyze seafood for nutritional value such as omega fatty acids and possible contaminants, such as mercury. Coupled with an understanding of what people eat, how much they eat, and how often they eat it, scientists can gauge a risk level, UF scientists say.

For example, scientists advise Americans to eat eight to 12 ounces of fish or seafood each week for their nutrient values. On the other hand, as recently as 2011, more than one-third of the country’s inland waterways were under fish advisories due to contamination, according to the U.S. Environmental Protection Agency; hence, the need to potentially limit consumption of certain fish to potentially vulnerable populations.

In 2010, people in many Gulf coastal communities grew concerned about seafood safety after the Deepwater Horizon oil spill. Mathews teamed up with UF researcher Andy Kane to help assess inshore-harvested seafood that was not directly addressed by scientists from the National Oceanic and Atmospheric Administration and the U.S. Food and Drug Administration, who were following up from the spill.

In order to examine potential risk for coastal seafood after the oil spill, Kane and other UF scientists collected more than 900 seafood samples and processed them for contaminants. They surveyed people in Gulf coast communities, representing 930 household members, to learn patterns of seafood consumption. A key element needed for this effort was a tool to help survey participants accurately report how much Gulf seafood they actually eat.

As part of the larger grant, Mathews, a UF/IFAS assistant professor of food science and human nutrition, led research that examined how accurately people could report their seafood intake, based on photographs of different portion sizes of cooked seafood. In the study, Mathews conducted two identical projects, one with fish and one with shrimp.

The first study asked 54 participants to look at seven plates of freshly cooked shrimp, with portion sizes ranging from two to 16 ounces, and asked them to pick the plate with a portion size that they usually consume. The second experiment, with 53 participants, replicated the same procedures with fish.

Study participants later looked at photographs of plates with a range of portion sizes of plated, cooked fish and shrimp, and researchers asked them to pick the photo of fish or shrimp that reflected the portion size they usually eat.

“When we compared ‘typical portion size choices’ from study participants, we saw no differences between photographs of seafood portions with the actual plates of fish or shrimp portions,” Mathews said. “That means the photographs helped participants to accurately identify the portion of seafood they would usually consume.”

In fact, the photographic seafood portion guide worked well for 94 percent of participants, who chose their “typical seafood portion” photograph within 2 ounces of the actual plate of freshly cooked fish or shrimp they previously selected.

Other research has shown that pictures of food, or three-dimensional food models, help scientists obtain accurate estimates of food intake. For most of those studies, however, participants need to be able to interpret variation shape, thickness and other characteristics of the food, Mathews said. The photographic portion guide developed in this study, with the camera and lighting methods used to produce the photographs, performed above expectations to account for variation between pictures and actual plated portions, based on the study findings.

In addition to publishing the validation outcomes supporting field use of this photographic portion guide, the guide is free for use by other scientists and can be downloaded from the supplemental materials link associated with the article, published in the journal Public Health Nutrition.

Mathews co-authored the study with Kane.

The mission of the University of Florida Institute of Food and Agricultural Sciences is to develop knowledge relevant to agricultural, human and natural resources and to make that knowledge available to sustain and enhance the quality of human life. With more than a dozen research facilities, 67 county Extension offices, and award-winning students and faculty in the UF College of Agricultural and Life Sciences, UF/IFAS works to bring science-based solutions to the state’s agricultural and natural resources industries, and all Florida residents. Visit the UF/IFAS web site