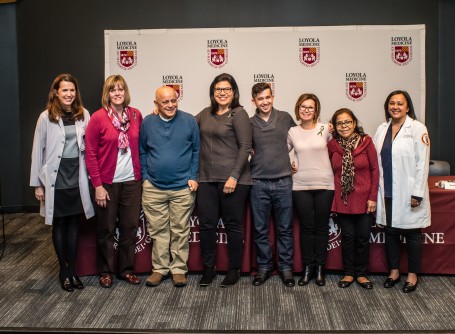 Newswise — MAYWOOD, IL – In an extraordinary act of generosity, Terri Thede decided to donate one of her kidneys to a Loyola Medicine transplant patient she had never met.

Nearly 100,000 people are on the kidney transplant waiting list. Patients can wait five years or longer for an organ from a deceased donor. Patients can avoid the long wait by getting kidneys from living donors, who can lead a normal life with one remaining kidney.

Some patients have friends or family members who are willing to donate, but may not be a good match. Kidney exchanges solve that problem by connecting willing donors to matching patients. In Loyola's case, the kidney exchange was started by Ms. Thede, the altruistic donor.

Ms. Thede, who lives in Normal, Illinois, first considered donating a kidney after reading about a boy who needed a transplant. When the boy wound up getting a kidney from a deceased donor, Ms. Thede still wanted to help. So she called Loyola's living donor program and offered to donate to any patient who matched.

Ms. Thede said she knew the enormous difference a kidney transplant can make to a patient who otherwise would have to be on dialysis. "If I could change one person's life, I felt it was very important to do so," she said. "I was between jobs, so I had the time. It was kind of a no brainer for me."

Mr. Parra's kidneys were failing due to diabetes and without a transplant he soon would have to go on dialysis. While dialysis is lifesaving, it is time-consuming, fatiguing and can cause complications such as high blood pressure, heart disease and infections.

The transplant enabled Mr. Parra, 72, of Bridgeview, Illinois, to avoid dialysis, and now he feels great. "If I was any happier, I would need a twin to share it," he said.

In exchange for the donation, Mr. Parra's wife Paula agreed to donate a kidney to a patient she matched – Vitalii Stasiuk, 34, of Franklin Park, Illinois.

Mr. Stasiuk had been on dialysis for nearly a year after his kidneys failed due to a disease called IgA nephropathy. Mr. Stasiuk's mother, Svitlana Gotska, wanted to donate to her son, but her kidneys were too small. So she paid it forward by donating a kidney to Irene Zapata, 61, of Chicago, who was on dialysis after her kidneys failed due to diabetes.

"I am very grateful for this new opportunity of life," Ms. Zapata said. "I feel like a new person."

The kidney exchange involved three operating rooms and three surgical teams. At 7:30 am, August 10, surgeons began removing a kidney from each donor. They used minimally invasive laparoscopic techniques that result in small incisions, less pain and faster recovery. After the kidneys were removed from each donor, the recipients were brought in for their surgeries.

"Loyola has the resources and experience to successfully complete such a complex and challenging endeavor," Dr. Garcia Roca said.

Loyola offers the highest level of integrated care for patients with kidney disease and kidney failure who are candidates for transplants. Loyola takes on the most challenging cases, including patients who have been turned down by other centers.