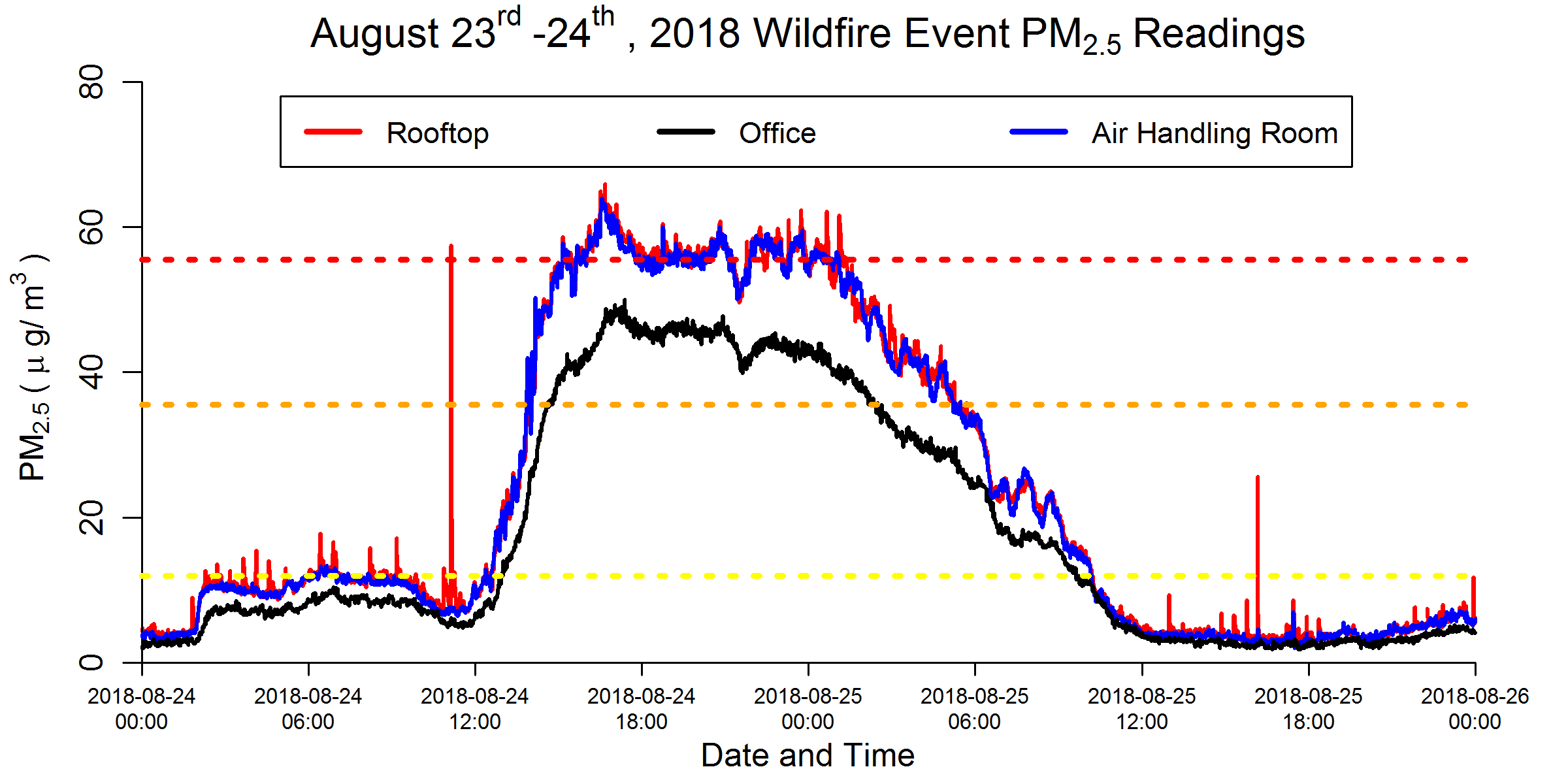 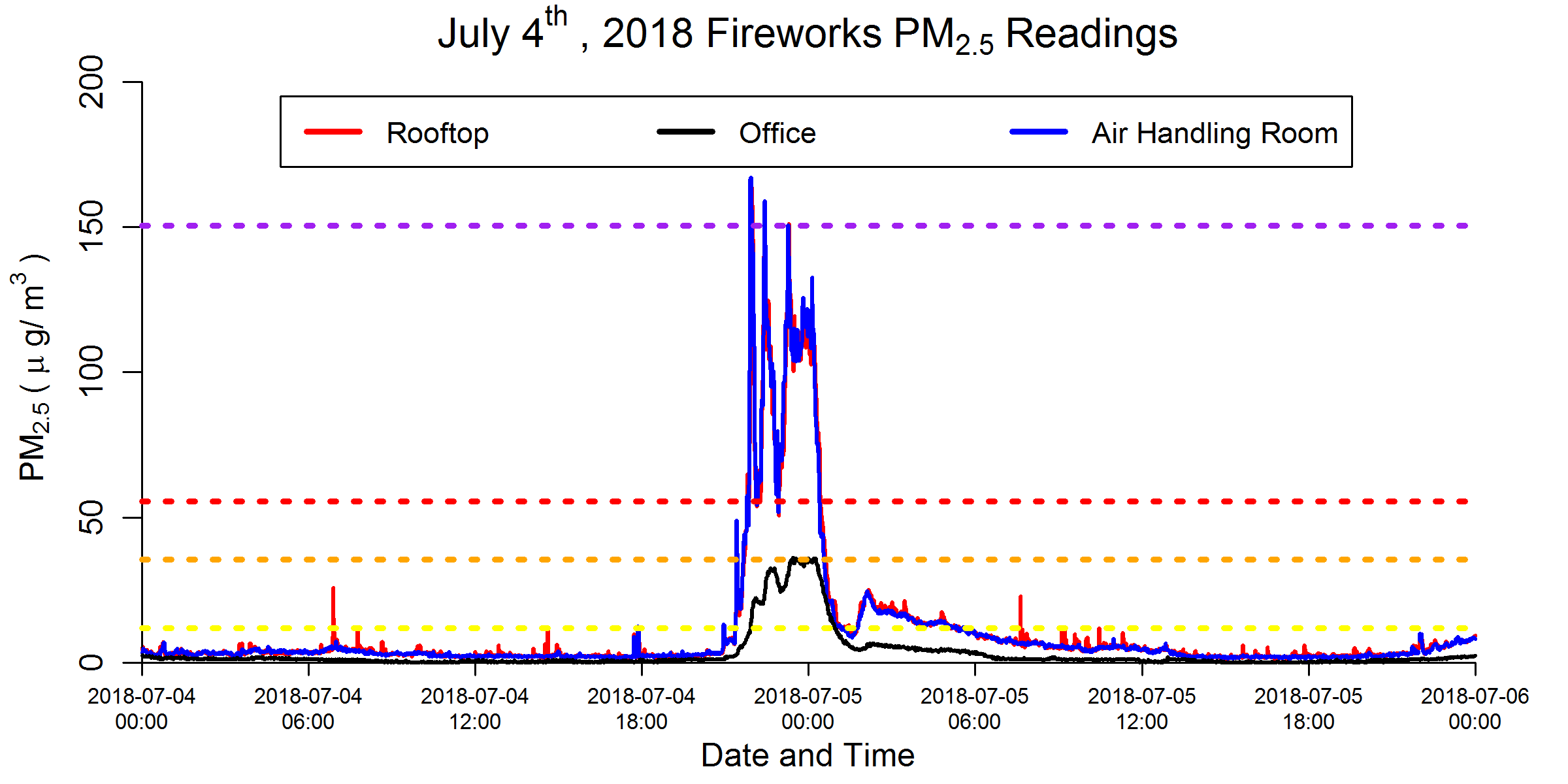 Newswise — Just when you thought you could head indoors to be safe from the air pollution that plagues the Salt Lake Valley, new research shows that elevated air pollution events, like horror movie villains, claw their way into indoor spaces. The research, conducted in conjunction with the Utah Division of Facilities Construction and Management, is published in Science of the Total Environment.

In a long-term study in a Salt Lake-area building, researchers found that the amount of air pollution that comes indoors depends on the type of outdoor pollution. Wildfires, fireworks and wintertime inversions all affect indoor air to different degrees, says Daniel Mendoza, a research assistant professor in the Department of Atmospheric Sciences and visiting assistant professor in the Department of City & Metropolitan Planning. The study is unique, Mendoza says, combining a long-term indoor air quality monitoring project with paired outdoor measurements and research-grade instruments.

“We all know about the inversions,” Mendoza says. “We all know how large of a problem wildfires are. But do we really know what happens when we're inside?”

Mendoza, who also holds appointments as an adjunct assistant professor in the Pulmonary Division at the School of Medicine and as a senior scientist at the NEXUS Institute, and his colleagues set up their air monitoring equipment at the Unified State Laboratories in Taylorsville, Utah. They placed three sensors to measure airborne concentrations of particulate matter: One on the roof to measure outdoor air, one in the air handling room—where the outdoor air comes in—and one in an office. The building uses a 100% outside air filtration system- this is not typical for most commercial buildings, which usually use some amount of recirculated air.

The sensors stayed in place from April 2018 to May 2019, just over a year. In the Salt Lake Valley, a year’s air quality events include fireworks-laden holidays on Independence Day and Pioneer Day (July 24), smoke from wildfires throughout the West that settles in the bowl-like valley and wintertime inversions in which the whole valley’s emissions are trapped in a pool of cold air.

Through it all, the team’s sensors kept watch. Amid the expected events, however, a private fireworks show took place on Aug. 17, 2018 within five miles of the study building, providing an unexpected research opportunity. More on that later.

During a wintertime inversion event in December, as the Air Quality Index outdoors reached orange and red levels, the indoor air quality reached yellow levels and stayed there until the inversion cleared. In all, the pollution levels inside were about 30% of what they were outside.

That’s not surprising, Mendoza says. During inversions, only around 20% of the air pollution is what’s called primary pollution—the particulate matter that comes directly from combustion exhaust. The rest is secondary—formed as gases undergo chemical reactions under specific meteorological conditions and combine to form solid particulates. As soon as the air comes indoors, those meteorological conditions change.

“That changes the chemical environment for these particles and they actually dissociate,” Mendoza says. “That's what we're suspecting is happening when these particles come into the building and that's why we don't observe them.”

See a minute-by-minute graph of this and other elevated air pollution events here.

In late August 2018, when three active wildfires were burning in California, indoor air pollution rose to about 78% of outside pollution levels.

It’s important to note, though, that thanks to the building’s air handling system, the air is still safer inside than outside.

The reason for the higher infiltration of particulate matter, Mendoza says, is that smoke particles are stable and don’t break down in different temperature and humidity conditions.

“We see those particles travel straight through the system,” Mendoza says, “because there’s no specific filtration that blocks out these particles. Smoke particles can also be smaller in size; that's why they're so dangerous for us.”

Utah has two major fireworks holidays, July 4 and July 24 (Pioneer Day). But the researchers happened to catch a signal from a private fireworks event just a few weeks before the wildfire smoke event, providing an opportunity to see how fireworks shows, both large and small, affected indoor air quality.

The smoke from fireworks is somewhere between inversion pollution and wildfires. It contains primary smoke particles as well as the gases that can combine to produce secondary particulates, which can come from the chemicals used to produce fireworks’ bright colors.

On the night of July 4, 2018, air quality sharply deteriorated once fireworks shows began and stayed in the red range, with spikes into the purple “very unhealthy” range, for about three hours. Indoor air quality reached orange levels, registering about 30% of the outdoor air pollution.

“It was only after 8 a.m. on July 5 that indoor air quality returned to pre-fireworks levels,” the researchers write.

The private fireworks show on August 17th lasted only 30 minutes, and although the scope was much smaller, the smoke was still enough to raise the indoor air quality index to orange for several minutes.

“Even a ‘small’ fireworks show did have a marked impact on indoor air quality,” Mendoza says. That matters to people with respiratory challenges who can see large-scale, poor air quality events like inversions and fireworks holidays coming—but who might find private fireworks shows an unpleasant surprise.

The commercial building that the researchers studied is a somewhat controlled environment. Learning about indoor air quality in homes will be a greater challenge. “You have kids coming in with mud or with dirt on their feet, you have vacuuming and cooking. So that's going to be our next step.” As many people are spending more time at home due to the COVID-19 pandemic, the research will hopefully help understand what actions people can take to improve their indoor air quality.

“There is a lot of opportunity to reduce the pollutants that reach occupants in buildings, both commercial and residential,” says Sarah Boll, assistant director of the Utah Division of Facilities Construction and Management. “To me, that is the great part of this work—with more research it can point the way to protecting people indoors.”