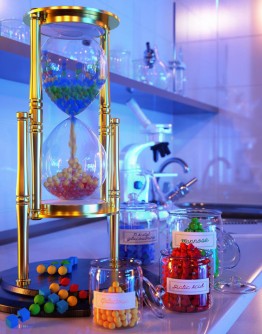 “Timing is everything.” “As secreted proteins age their attached complex N-glycans undergo a progressive enzymatic loss of sugar linkages, one at a time, leading to the appearance of signals of increased age that determine a protein’s life span.”

Newswise — La Jolla, Calif., October 19, 2015 – Physiological processes in the body are in large part determined by the composition of secreted proteins found in the circulatory systems, including the blood. Each of the hundreds of proteins in the blood has a specific life span that determines its unique range of abundance. In fact, measurements of their quantities and activities contribute to many clinical diagnoses. However, the way in which normal protein concentrations in the blood are determined and maintained has been a mystery for decades.

Biomedical scientists at the Sanford Burnham Prebys Medical Discovery Institute (SBP) and UC Santa Barbara (UCSB) have now discovered a mechanism by which secreted proteins age and turnover at the end of their life spans. Their findings, which shed light on a crucial aspect of health and disease, appear today in the Proceedings of the National Academy of Sciences (PNAS).

“This is a fundamental advance that is broadly applicable and provides an understanding of how secreted proteins, which are involved in many important physiological processes, normally undergo molecular aging and turnover,” said senior author Jamey Marth, Ph.D., professor in SBP’s NCI-designated Cancer Center.

“When a secreted protein is made, it has a useful life span and then it must be degraded — the components are then basically recycled,” added Marth, also director of UCSB’s Center for Nanomedicine and a professor in the campus’s Department of Molecular, Cellular, and Developmental Biology. “We can now see how the regulation and alteration of secreted protein aging and turnover is able to change the composition of the circulatory system and thereby maintain health as well as contribute to various diseases.”

This newly discovered mechanism encompasses multiple factors, including circulating enzymes called glycosidases. These enzymes progressively remodel N-glycans, which are complex structures of monosaccharide sugars linked together and attached to virtually all secreted proteins.

It is the N-glycan structure itself that identifies the protein as nearing the end of its life span. Subsequently, multiple receptors known as lectins — carbohydrate-binding proteins — recognize these aged proteins and eliminate them from circulation.

Marth and colleagues identified more than 600 proteins in the bloodstream that exhibit molecular signs of undergoing this aging and turnover process. Many of these proteins are regulators of proteolysis (the breakdown of proteins), blood coagulation and immunity.

Honing in on individual examples, the researchers were able to track each of them through time and watch the process unfold. “In these studies we further saw that the different life spans of distinct proteins are accounted for by the different rates of aging due to N-glycan remodeling,” said lead author Won Ho Yang, Ph.D., a postdoctoral associate at SBP and at UCSB’s Center for Nanomedicine.

“Altering this aging and turnover mechanism is the fastest way to change the abundance of a secreted protein, which we increasingly note is occurring at the interface of health and disease,” Marth explained. “In retrospect from published literature and from studies in progress, we can now see how sepsis, diabetes and inflammatory bowel disorders can arise by the targeted acceleration or deceleration of secreted protein aging and turnover.

“The discovery of this mechanism provides a unique window into disease origins and progression,” Marth added. “It has been known that circulating glycosidase enzyme levels are altered in diseases such as sepsis, diabetes, cancer and various inflammatory conditions. The resulting changes in the composition and function of the circulatory systems, including the blood and lymphatic systems, can now be identified and studied. We are beginning to see previously unknown molecular pathways and connections in the onset and progression of disease.”

This study was supported by NIH grants HL125352 and GM100192. Supplemental funding was provided by Grant DK14842 and the Wille Family Foundation.

About Sanford Burnham Prebys Medical Discovery InstituteSanford Burnham Prebys Medical Discovery Institute (SBP) is an independent nonprofit research organization that blends cutting-edge fundamental research with robust drug discovery to address unmet clinical needs in the areas of cancer, neuroscience, immunity, and metabolic disorders. The Institute invests in talent, technology, and partnerships to accelerate the translation of laboratory discoveries that will have the greatest impact on patients. Recognized for its world-class NCI-designated Cancer Center and the Conrad Prebys Center for Chemical Genomics, SBP employs more than 1,100 scientists and staff in San Diego (La Jolla), Calif., and Orlando (Lake Nona), Fla. For more information, visit us at SBPdiscovery.org. The Institute can also be found on Facebook at www.facebook.com/SBPdiscovery and on Twitter @SBPdiscovery.