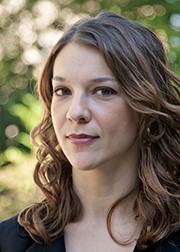 Paula Ioanide, associate professor in the college's Center for the Study of Culture, Race, and Ethnicity

Associate professor Paula Ioanide in the Center for the Study of Culture, Race and Ethnicity at Ithaca College was featured in the International Business Times article “What Is White Privilege? Jesse Williams, Nicki Minaj Tackle Racism Amid Sandra Bland Death, Black Lives Matter Protests.” The piece discussed the concept of white privilege and public consciousness surrounding the topic.

Ioanide is quoted saying that white privilege is a series of attitudes and institutional policies that give unearned benefits to white people by default. She is further quoted: "The privilege is in not experiencing discrimination by virtue of the fact that you fit that common-sense attitude of what is good or what is beautiful or what is valuable or what is worthy."

Ioanide’s research focuses on the negative effects of present-day inequalities and injustices. Her just-published book “The Emotional Politics of Racism: How Feelings Trump Facts in an Era of Colorblindness” examines how the human tendency to let emotions win out over reason leads Americans to support racism and discrimination in unconscious ways.

The book presents four case studies from the last 20 years to illustrate the powerful undercurrents of sentiment that shape our society's oppressive discourses and policy decisions on crime, social welfare, immigration and terrorism — despite most Americans’ claims to be against racial and gender bias.

Protecting that sense of self identity against perceived threats from "others," be it racial or ethnic minorities or overseas religious ideologies, has led a majority of U.S. constituents to legitimize the expansion of the prison system, the militarization of domestic police forces, the stigmatization and reduction of public services, and a permanent state of warfare for America's armed services, Ioanide argues in the book. All this despite sound research and factual evidence that illustrates these policies and trends do more harm than good to society as a whole.

"The emotions create this logic that is very difficult to disrupt through sound, cognitive knowledge," she said.

The book presents this argument with a look at the specific cases of Abner Louima, a Hatian immigrant who was brutalized by New York City Police officers in the late 1990s; the demolition of public housing in New Orleans after Hurricane Katrina; a proposed ordinance by the city of Escondito, Calif., to deny housing to undocumented immigrants; and the torture of prisoners at Abu Ghraib prison in Iraq.

Ioanide says that most research on institutionalized racism and discrimination focuses on the economic and monetary advantages that a group in power is trying to maintain over another. She doesn’t discount the influence of those elements. But average constituents along the liberal and conservative spectrum — who her book is concerned with, rather than law makers and politicians — don’t always behave as if those factors are primary motivators.

“That’s not how most people explain their political stances to themselves. It’s rare that someone will just straight up admit ‘Yes, the reason I’m investing in discrimination is because I want to keep my property values high,’” Ioanide said.

Rather, they invest in what she calls “emotional economies,” a socially shared view on things like crime, social welfare, immigration and terrorism. They speak about these topics in a way that, on its surface, can’t be construed as discriminatory or violent against a particular group or class of citizens. But the unspoken message and stereotypes are loud and clear, whether perceived unconsciously or by those actively reading between the lines.

"One of the unanticipated outcomes of mid-20th century freedom movements is that it has become “unacceptable to talk about race in overtly racist terms. That then forces a shift to this ‘colorblind’ and racially-coded language,” Ioanide said.

Ioanide hopes the book will help activists, organizers and others who seek to promote social change recognize that simply throwing more facts and statistics around won’t always help open people’s eyes to an issue, because it requires someone to take a long hard look at themselves and to face their own unintentional engagement with racism and discrimination.

“These emotions often have powerful systems of denial and disavowal,” she said.

The factual evidence matters, Ioanide said, but someone has to be receptive to it first. She hopes her book will demonstrate why activists need to come at the problem of social justice differently, and to find new ways to appeal to people’s hearts so they can in turn appeal to their rationality.

“What I’m hoping is that we at least disrupt the dominance of these public feelings around criminality, terrorism, welfare and immigration by poking holes in them; by showing how their logic is not as clear-cut and powerful as we might think,” she said.