How Sweet It Is: "Revolutionary" Process Points to Sugar-fueled Cars 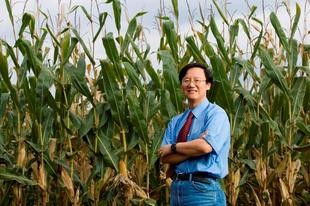 Percival Zhang, a scientist at Virginia Tech, is developing a new process for converting plant sugars into hydrogen that could be used to cheaply and efficiently power vehicles equipped with hydrogen fuel cells without producing any pollutants.

Newswise — Chemists are describing development of a "revolutionary" process for converting plant sugars into hydrogen, which could be used to cheaply and efficiently power vehicles equipped with hydrogen fuel cells without producing any pollutants.

The process involves combining plant sugars, water, and a cocktail of powerful enzymes to produce hydrogen and carbon dioxide under mild reaction conditions. They reported on the system, described as the world's most efficient method for producing hydrogen, at the 235th national meeting of the American Chemical Society.

The new system helps solve the three major technical barriers to the so-called "hydrogen economy," researchers said. Those roadblocks involve how to produce low-cost sustainable hydrogen, how to store hydrogen, and how to distribute it efficiently, the researchers say.

"This is revolutionary work," says lead researcher Y.-H. Percival Zhang, Ph.D., a biochemical engineer at Virginia Tech in Blacksburg, Va. "This has opened up a whole new direction in hydrogen research. With technology improvement, sugar-powered vehicles could come true eventually."

While recognized a clean, sustainable alternative to fossil fuels, hydrogen production is expensive and inefficient. Most traditional commercial production methods rely on fossil fuels, such as natural gas, while innovations like microbial fuel cells still yield low levels of hydrogen. Researchers worldwide thus are urgently looking for better way to produce the gas from renewable resources.

Zhang and colleagues believe they have found the most promising hydrogen-producing system to date from plant biomass. The researchers also believe they can produce hydrogen from cellulose, which has a similar chemical formula to starch but is far more difficult to break down.

In laboratory studies, the scientists collected 13 different, well-known enzymes and combined them with water and starches. Inside a specially designed reactor and under mild conditions (approximately 86 degrees Fahrenheit), the resulting broth reacted to produce only carbon dioxide and hydrogen with no leftover pollutants.

The method, called "in vitro synthetic biology," produced three times more hydrogen than the theoretical yield of anaerobic fermentation methods. However, the amount of hydrogen produced was still too low for commercial use and the speed of the reactions isn't optimal, Zhang notes.

The researchers are now working on making the system faster and more efficient. One approach includes looking for enzymes that work at higher temperatures, which would speed hydrogen production rates. The researchers also hope to produce hydrogen from cellulose, which has similar chemical formula to starch, by replacing several enzymes in the enzyme cocktail.

Zhang envisions that one day people will be able to go to their local grocery store and buy packets of solid starch or cellulose and pack it into the gas tank of their fuel-cell car. Then it's a pollution-free drive to their destination — cheaper, cleaner, and more efficiently than even the most fuel-stingy gasoline-based car. And unlike cars that burn fossil fuel, the new system would not produce any odors, he says. Also, such a system will be safe because the hydrogen produced is consumed immediately, the researcher notes.

Alternatively, the new plant-based technology could even be used to develop an infrastructure of hydrogen-filling stations or even home-based filling stations, Zhang says. But consumers probably won't be able to take advantage of this automotive technology any time soon: He estimates that it may take as many as 8 to 10 years to optimize the efficiency of the system so that it is suitable for use in vehicles.

A scaled-down version of the same technology could conceivably be used to create more powerful, longer lasting sugar batteries for portable music players, laptops, and cell phones, Zhang says. That advance could take place in as few as 3 to 5 years, the researcher estimates.

The study, which is funded by the Air Force Office of Scientific Research and the Institute for Critical Technology and Applied Science of Virginia Tech, is a collaborative project between Va. Tech, Oak Ridge National Laboratory in Oak Ridge, Tenn.; and the University of Georgia in Athens, Ga. The American Chemical Society — the world's largest scientific society — is a nonprofit organization chartered by the U.S. Congress and a global leader in providing access to chemistry-related research through its multiple databases, peer-reviewed journals and scientific conferences. Its main offices are in Washington, D.C., and Columbus, Ohio.

The paper on this research, FUEL 213, will be presented at 3:10 p.m. on Wednesday, April 9, at the Morial Convention Center, Room 239, during the symposium, "Ultraclean Transportation Fuels."

Y.-H. Percival Zhang, Ph.D., is an Associate Professor in the Biological Systems Engineering Department at Virginia Tech in Blacksburg, Va. ALL PAPERS ARE EMBARGOED UNTIL DATE AND TIME OF PRESENTATION, UNLESS OTHERWISE NOTED The paper on this research, FUEL 213, will be presented at 3:10 PM, Wednesday, April 9, 2008, during the symposium, "Ultraclean Transportation Fuels." FUEL 213Complete conversion of carbohydrate and water to hydrogen and carbohydrate dioxide by a synthetic enzymatic pathway

Abstract The evaluation of transportation fuels need to include a number of factors, such as, fuel costs, system costs, storage densities, primary energy source, energy efficiency, technological maturity, environmental concerns, and societal concerns. Hydrogen-fuel cell system is believed to eventually replace current internal combustion engine for transportation sector because the former has much higher energy conversion efficiencies and does not produce any pollutant. But there are several technical obstacles to the hydrogen economy, such as, production, storage, distribution, and safety concerns. Polymeric carbohydrates (C6H10O5) is proposed as a hydrogen carrier (14.8 H2 mass %), based on a new breakthrough " complete conversion of carbohydrate and water to hydrogen and carbon dioxide published in a new open access journal of Public Library of Science ONE, 2007, 2:e456. This new conversion is implemented by a new technology called in vitro synthetic biology. Special features, such as, safe storage of solid carbohydrates, modest reaction conditions, easy separation of the products and reactants (gas/liquid), complete conversion, high hydrogen storage capacity (14.8 mass%), no toxic by-products (e.g., CO), and no special infrastructure needed, make carbohydrate as a hydrogen carrier more appealing, as compared to other hydrogen carriers. With technology improvement, sugar-powered vehicles would come true eventually. ________________________________________Researcher Provided Non-Technical Summary Briefly explain in lay language what you have done, why it is significant and what are its implications (particularly to the general public)

This is revolutionary work. We have published the scientific paper in PLoS ONE. But most audience do not recognize its importance and impacts. Here we further present why it is a revolutionary work -- greatly impacts on the hydrogen economy because we solve three technical challenges once -- how to produce low-cost sustainable hydrogen, how to store hydrogen, and how to distribute hydrogen. In addition, we will disucss 10 rules to evaluate transportation fuels. In conclusion, sugar to hydrogen could be the best solution. Our scientific paper about technology has been widely highlighted by the Economist, New Scientist, Technology Review. We believe that new systematic analysis about system will convince more people working on this new direction. How new is this work and how does it differ from that of others who may be doing similar research?

This is a completely new direction, different from any other work. This is a surprising work, is a real silver bullet to the hydrogen economy. More people know, more exciting! Some readers thought of our invention as the greatest work after introduction of computer.