How Sweet It Is: Study Finds Songbirds CAN Taste Sugar 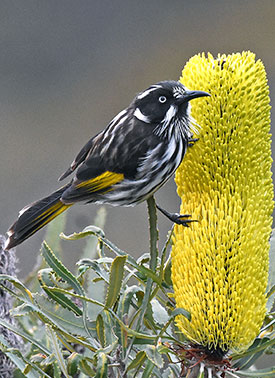 Credit: Photograph by Gerald Allen, Macaulay Library at the Cornell Lab of Ornithology.

Credit: Photograph by Martin Flack, Macaulay Library at the Cornell Lab of Ornithology.

Newswise — Contrary to conventional thought, songbirds can taste sugar—even though songbirds are the descendants of meat-eating dinosaurs and are missing a key protein that allows humans and many other animals to taste sweetness. An international team investigated how many bird species can taste sweet and how far back that ability evolved. Their work was published today in the journal Science.

The researchers offered two species of songbirds a choice between sugar water and plain water—nectar-taking honeyeaters, as well as canaries, a grain-eating bird not known for consuming sweet foods. They also examined taste receptor responses sampled from a variety of other species. Regardless of whether their main diet consisted of seeds, grains, or insects, songbird taste receptors responded to sugars.

"This was a clear hint that we should concentrate on a range of songbirds, not only the nectar-specialized ones, when searching for the origins of avian sweet taste," explains senior author Maude Baldwin at the Max Planck Institute for Ornithology in Germany. Baldwin led this study with Yasuka Toda from Meiji University in Japan.

Sugar is a vital carbohydrate providing lots of energy and may have had far-reaching effects on songbird evolution. Though it is thought that most bird lineages can't taste sweetness at all, the scientists now believe that songbirds, which account for more than 40% of the world's bird species, can actually taste sweet, and that sugary food sources may have contributed to their success.

Baldwin and Toda dug down to the molecular level to understand the modifications to the "umami" taste receptor that enabled sweet perception among songbirds.

"Because sugar detection is complex, we needed to analyze more than one hundred receptor variants to reveal the molecular mechanisms underlying the sugar responses," says Toda. These exact changes coincide only slightly with those seen in the distantly-related hummingbirds, even though similar areas of the receptor are modified.

Though songbirds evolved similar workarounds to taste sweetness, they did so at different times, in different places, and in slightly different ways—an example of "convergent evolution." Some songbirds, such as honeyeaters, sunbirds, honeycreepers, and flowerpiercers are now just as dependent on nectar as the hummingbirds.

"This study fundamentally changes the way we think about the sensory perceptions of nearly half the world's birds," says study co-author Eliot Miller at the Cornell Lab of Ornithology. "It demonstrates that most songbirds definitely can taste sweet and got there by following nearly the same evolutionary path that hummingbirds did—it’s a neat story about how convergence happens."

Exploring the songbird family tree, the researchers conclude that songbirds evolved to sense sweetness approximately 30 million years ago, before the early ancestors of songbirds left Australia, where all songbirds originated. Even after songbirds radiated across the world, they kept their ability to taste sugar.

Researchers in Japan, Germany, the United States, Hong Kong, and Australia participated in this study. Future studies will explore how sweet perception has coevolved with other physiological traits, such as changes in digestion and metabolism, across bird evolution.

Credit: Photograph by Gerald Allen, Macaulay Library at the Cornell Lab of Ornithology.

Credit: Photograph by Martin Flack, Macaulay Library at the Cornell Lab of Ornithology.