Researchers in France have discovered that, though a tattoo may be forever, the skin cells that carry the tattoo pigment are not. Instead, the researchers say, the cells can pass on the pigment to new cells when they die. The study, which will be published March 6 in the Journal of Experimental Medicine, suggests ways to improve the ability of laser surgery to remove unwanted tattoos.

For many years, tattoos were thought to work by staining fibroblast cells in the dermal layer of the skin. More recently, however, researchers have suggested that macrophages—specialized immune cells that reside in the dermis—are attracted to the wound inflicted by the tattoo needle and gobble up the tattoo pigment just as they would normally engulf an invading pathogen or piece of a dying cell. In either case, it is assumed that the pigment-carrying cell lives forever, allowing the tattoo to be more or less permanent.

A team of researchers led by Sandrine Henri and Bernard Malissen of the Centre d’Immunologie de Marseille-Luminy developed a genetically engineered mouse that allowed them to kill the macrophages that reside in the dermis and certain other tissues. Over the following few weeks, these cells are replaced by new macrophages derived from precursor cells known as monocytes.

The researchers found that dermal macrophages were the only cell type to take up pigment when they tattooed the mice’s tails. Yet the tattoos’ appearance did not change when the macrophages were killed off. The team determined that the dead macrophages release the pigment into their surroundings, where, over the following weeks, it is taken up by new, monocyte-derived macrophages before it can disperse.

This cycle of pigment capture, release, and recapture occurs continuously in tattooed skin, even when macrophages aren’t killed off in a single burst. The researchers transferred a piece of tattooed skin from one mouse to another and found that, after six weeks, most of the pigment-carrying macrophages were derived from the recipient, rather than the donor, animal.

“We think that, when tattoo pigment–laden macrophages die during the course of adult life, neighboring macrophages recapture the released pigments and insure in a dynamic manner the stable appearance and long-term persistence of tattoos,” Henri explains.

Tattoos can be removed by laser pulses that cause skin cells to die and release their pigment, which can then be transported away from the skin and into the body’s lymphatic system.

“Tattoo removal can be likely improved by combining laser surgery with the transient ablation of the macrophages present in the tattoo area,” says Malissen. “As a result, the fragmented pigment particles generated using laser pulses will not be immediately recaptured, a condition increasing the probability of having them drained away via the lymphatic vessels.”

About the Journal of Experimental Medicine The Journal of Experimental Medicine (JEM) features peer-reviewed research on immunology, cancer biology, stem cell biology, microbial pathogenesis, vascular biology, and neurobiology. All editorial decisions are made by research-active scientists in conjunction with in-house scientific editors. JEM provides free online access to many article types from the date of publication and to all archival content. Established in 1896, JEM is published by Rockefeller University Press. For more information, visit jem.org.

Caption: Green tattoo pigment is taken up by dermal macrophages (left). The pigment is released when these cells are killed (center) but, 90 days later, is taken back up into new macrophages that have replaced the old ones (right). 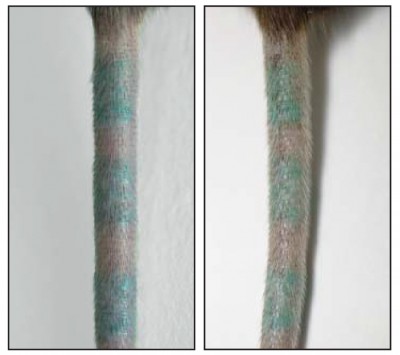 Caption: Because tattoo pigment can be recaptured by new macrophages, a tattoo appears the same before (left) and after (right) dermal macrophages are killed.