How the Anthrax Toxin Forms a Deadly “Conveyer Belt” 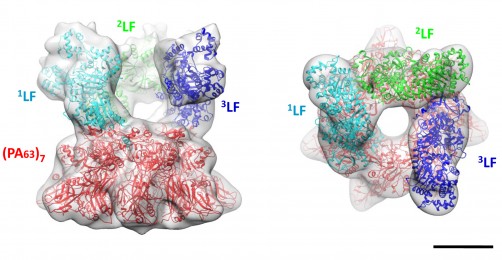 The crystal structures of the anthrax toxin LF and PA subunits are superimposed on the 3-D map of the prepore complex obtained by cryo–electron microscopy. The side view (left) and top-down view (right) show three LF molecules perched above the rim of the pore formed by seven PA subunits.

Newswise — Researchers have built a three-dimensional map of the anthrax toxin that may explain how it efficiently transfers its lethal components into the cytoplasm of infected cells. The study, “Structure of anthrax lethal toxin prepore complex suggests a pathway for efficient cell entry,” which will be published online September 26 ahead of print in The Journal of General Physiology, suggests that the bacterial protein acts as a “conveyer belt” that allows toxic enzymes to continuously stream across cell membranes.

During anthrax infections, the bacterium Bacillus anthracis secretes a toxin consisting of two related enzymes named lethal factor (LF) and edema factor (EF) and a third protein called protective antigen (PA). The three proteins bind to each other and are engulfed into the endosomes of host cells. Seven to eight PA proteins then form a pore in the endosomal membrane, allowing LF and EF to translocate into the cytoplasm where they can damage, and ultimately kill, the host cell. To pass through the pore, however, LF and EF must unfold in the endosomal lumen before refolding into their active conformations in the cytoplasm.

A team of researchers led by Isabelle Rouiller of McGill University in Montreal and Robert Liddington of the Sanford Burnham Prebys Medical Discovery Institute in La Jolla used cryo–electron microscopy to build a three-dimensional map of the “prepore” complex formed by PA and LF just before the translocation process begins. The map showed seven PA proteins surrounding a narrow pore, with three LF molecules perched at the rim, ready to be translocated. As well as binding to the PA subunits, each LF molecule also bound to its clockwise neighbor. The researchers think that these inter-LF interactions may help to hold the toxic enzymes in place and prevent them from unfolding prematurely.

Moreover, as the first LF molecule enters the pore, its neighbor would be destabilized so that it could immediately follow on the first molecule’s tail. Additional LF proteins could bind to vacated spots on the pore’s rim, leading to a continuous stream of molecules into the cytoplasm. Indeed, electrophysiological recordings of the prepore complex in action supported the idea that it can continuously translocate LF molecules. “We have demonstrated that the anthrax pore can translocate full-length LF in a highly efficient, fast, and robust fashion,” says Rouiller. “The pore can effectively remain fully loaded for extended periods, acting as a conveyer belt while translocating a continuous ‘daisy chain’ of deadly LF molecules.”

About The Journal of General PhysiologyThe Journal of General Physiology (JGP) features peer-reviewed research in biological, chemical, or physical mechanisms of broad physiological significance, with an emphasis on physiological problems at the cellular and molecular level. All editorial decisions are made by research-active scientists in conjunction with in-house scientific editors. JGP provides free online access to many article types immediately, with complete archival content freely available online. Established in 1918, JGP is published by The Rockefeller University Press. For more information, visit jgp.org. Follow us on Twitter at @JGenPhysiol and @RockUPress.