How the Galapagos Cormorant Lost Its Ability to Fly

UCLA geneticist Alejandro Burga explains how genetic mutations during evolution shortened the Galapagos cormorant's wings, leaving it unable to fly. The same genes stunt the limbs in a rare bone disorder in people. 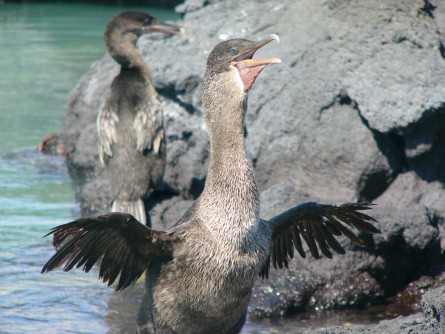 The Galapagos cormorant is the only one of 40 cormorant species that cannot fly. 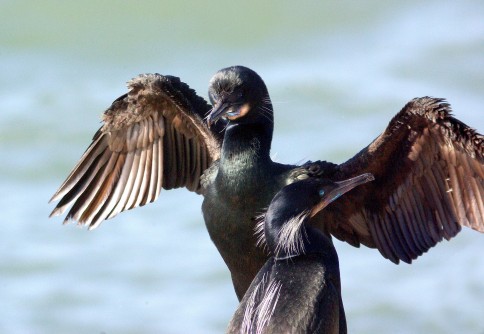 A cormorant common to the Pacific coast extends its powerful wings.

Newswise — The flightless cormorant is one of a diverse array of animals that live on the Galapagos Islands, which piqued Charles Darwin’s scientific curiosity in the 1830s. He hypothesized that altered evolutionary pressures may have contributed to the loss of the ability to fly in birds like the Galapagos cormorant.

In a new study unraveling the cormorant’s DNA, UCLA scientists discovered genetic changes that transpired during the past 2 million years and contributed to the bird’s inability to fly. Interestingly, when these same genes go awry in humans, they cause bone-development disorders called skeletal ciliopathies.

Published June 2 in the journal Science, the findings shed light on the genetic mechanisms underlying the evolution of limb size and could eventually lead to new treatments for people with skeletal ciliopathies.

“A number of these iconic, salient evolutionary changes occurred in the Galapagos,” said senior author Leonid Kruglyak, chair of human genetics at the David Geffen School of Medicine at UCLA. “Darwin, just by looking at these changes, inferred the process of evolution by natural selection. We now have sophisticated genetic tools to reexamine these classic examples and uncover what happened at the molecular level.”

The Galapagos cormorant, with its short, scraggly wings, is the only one of 40 cormorant species that cannot fly. It is also the largest of the cormorants, and a strong swimmer that dives for its meals of fish.

Researchers, including Darwin, have proposed two evolutionary paths for the loss of flight. In some cases, changes that lead to flightlessness may help birds survive because they enhance their ability to do something else, like swimming — so-called positive selection.

Alternatively, the birds may have lost their ability to fly simply because they didn't need to migrate or escape from predators. When flying isn’t essential for survival, the mutations that hinder flight can gradually accumulate in the gene pool.

“These two scenarios aren’t mutually exclusive,” said Kruglyak, who is also a Howard Hughes Medical Institute investigator. “You can start down the path because of passive loss of flight but then also have positive selection to keep reducing wings.”

A trip to the Galapagos Islands launched Kruglyak’s interest in the cormorants. Together with first author Alejandro Burga, a postdoctoral fellow in Kruglyak’s lab, they contacted Patricia Parker, a professor of zoological studies at the University of Missouri-St. Louis. She had obtained Galapagos cormorant DNA samples for a previous study and agreed to collaborate on this project.

The researchers sequenced the genomes of flightless cormorants and three other cormorant species to zero in on genetic changes possibly linked to flight. They next used a program capable of determining whether the genetic changes they identified were likely to affect protein structure and function.

Their analyses led them to a gene called CUX1, which was previously linked to shortened wings in chickens. The scientists noticed that Galapagos cormorants possessed a different version of CUX1 than its flying relatives.

“We saw a mutation in this gene that we’ve never seen in other animals,” Burga said. The team confirmed that the changes to the CUX1 gene altered the protein’s function, likely affecting wing size.

The team also found that the flightless cormorants have an abnormally high number of genetic mutations affecting cilia — small, hair-like structures that protrude from cells and regulate everything from normal development to reproduction.

Cilia play a critical role in bone growth. People born with skeletal ciliopathies have shorter limbs, narrowed chests and stunted rib cages — as do the Galapagos cormorants. The UCLA results suggest that CUX1 controls many aspects of cilia, some of which influence bone growth.

Future studies, Kruglyak said, will explore whether other flightless birds, like the ostrich and kiwi, share mutations with the Galapagos cormorant, and whether these genes can help biologists better understand evolution and limb development.

“Loss of flight is something that has taken place in birds frequently,” Kruglyak said. “There’s a pretty rich field trying to understand how all these changes happen and whether common trajectories exist between species.”

The study’s other authors are Weiguang Wang, Karen Lyons and Eyal Ben-David all of UCLA; Paul Wolf of the U.S. Department of Agriculture/Wildlife Services; Andrew Ramey of the U.S. Geological Survey Alaska Science Center; and Claudio Verdugo of the Universidad Austral de Chile.