Laura Jana, M.D., a pediatrician and associate professor at the University of Nebraska Medical Center, proposes a parenting paradigm shift in her new book, “The Toddler Brain: Nurture the Skills Today That Will Shape Your Child’s Tomorrow.” 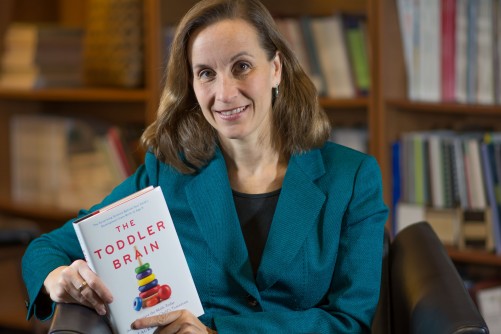 Want to know how best to prepare children to succeed in the 21st century?

Newswise — Laura Jana, M.D., a pediatrician and associate professor and director of innovation at the University of Nebraska Medical Center College of Public Health, proposes a parenting paradigm shift in her new book, “The Toddler Brain: Nurture the Skills Today That Will Shape Your Child’s Tomorrow.”

Her book, which applies beyond toddlerhood, has less to do with the alphabet or numbers and more to do with ME, WE, WHY, WILL, WIGGLE, WOBBLE and WHAT IF.

Dr. Jana collectively likens her seven QI Skills (pronounced key) to the positive life force referenced in the ‘may the force be with you’ line of Star Wars fame.

“QI Skills have been clearly identified as necessary for 21st century success, and their development starts much earlier than most people realize -- in the first five years,” Dr. Jana said.

She said the best way to cultivate QI Skills involves many things parents naturally do – including talking, cooing, singing and reading books to babies.

In connecting with business leaders, economists and entrepreneurs, she discovered that the skills most coveted in today’s workforce are the very same as those that are best nurtured in the first five years of life.

In pre-school terms, those same competencies translate into such commonly practiced skills as “put your listening ears on, use your words, learn to play nice with others and in the same sandbox.” The modern-day boardroom looks and sounds surprisingly like the playroom.

“It’s long been recognized that children spend the first years of life learning to read and the rest of their life reading to learn,” she said. “The ability to read proficiently by third grade has been tied to everything from high school graduation and future economic success to a country’s global competitiveness and national security.”

And a predictor of third grade reading scores is an 18-month-old’s vocabulary.

“It brings us back to the strategic foundational importance of caring, responsive adults and strategic 21st-century skill building right from the very start.

“That’s why it’s important for all of us – from parents to pediatricians to policy makers – to think strategically in terms of long-range goals and how best to raise a ready-for-life adult.”

The QI skillsLaura Jana, M.D., identifies these seven skills as necessary for children (and adults) to succeed in the 21st century.

WEPeople skills that allow us to understand, share and “play well” with others, including the language, empathy, listening, and social-emotional skills necessary for effective communication, collaboration and teamwork.

WHYSkills that include questioning, curiosity and inquisitiveness that allow us to see the world as a question mark and strive for a better understanding of how the world works.

WILLSelf-motivation and drive define these critically important skills that include a can-do attitude, conscientiousness, determination, gumption, persistence, perseverance and focus.

WIGGLEPhysical and intellectual restlessness make up the WIGGLE skills that play a key role in putting WHY and WILL skills into action.

WOBBLESkills that allow for, build and foster agility, adaptability and resilience, and confer the ability to face, overcome and learn from failure.

WHAT IFEncompasses curiosity, imagination and creativity that will ultimately allow us to understand not just how the world is, but envision how it could be.

About Dr. Laura JanaIn addition to having practiced pediatrics, Dr. Jana has a degree in cellular molecular biology, dabbled in neuroscience and worked and consulted with Benjamin Spock, M.D., recognized as one of the most trusted pediatricians of the 20th century. She has written several parenting and children’s books and owned and operated the first child care center in Nebraska to be accredited as a school.