How to Stop the Nasty Lurking Toxoplasmosis Parasite? Target Its “Stomach,” Research Suggests 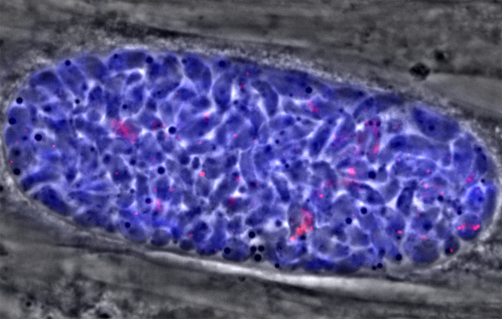 Newswise — ANN ARBOR, MI – One in three people has a potentially nasty parasite hiding inside their body -- tucked away in tiny cysts that the immune system can’t eliminate and antibiotics can’t touch.

But new research reveals clues about how to stop it: Interfere with its digestion during this stubborn dormant phase.

If the discovery, made at the University of Michigan, leads to new treatments, it could help prevent a parasitic disease called toxoplasmosis that sickens people worldwide.

For many people, the parasite Toxoplasma gondii only causes mild flu-like symptoms, often from food poisoning. After that initial infection, it usually goes into cyst phase and remains in the person’s body for the rest of their life.

But in people with weak immune systems or pregnant women, the infection can cause problems immediately or after cysts awaken, damaging their brain, eyes or a fetus they carry. Even healthy people can suffer repeated retina damage if the parasite dwells in their eyes. Some evidence even links it to mental illness.

A U-M Medical School team has just published its findings about the newly discovered vulnerability of Toxoplasma tissue cysts in Nature Microbiology.

They report that a molecule called cathepsin protease L, or CPL, is crucial to the parasite’s ability to survive the cyst phase and cause disease in mice. By interfering with CPL on a genetic level, and also using a drug, they stopped toxoplasmosis.

They show for the first time that a form of digestion of the parasite’s own innards -- called autophagy, and led by CPL -- is crucial to Toxoplasma’s ability to persist. It’s the first time this has been shown in Toxoplasma under normal conditions.

“The largest unmet need in toxoplasmosis is dealing with the chronic infection stage, which is the source of potentially severe disease through reactivation of the parasite from cysts,” says Vern Carruthers, Ph.D., the leader of the research group and a professor of microbiology and immunology at U-M. “While there are reasonably good treatments for acute infections, and the immune system does a good job in healthy people of keeping it in check, no options exist for killing the cyst form to protect immunocompromised people and those who have had a previous eye infection.”

Carruthers and his team figured out the crucial role of CPL and the importance of autophagy over the course of several experiments on the cysts, which contain forms of the parasites called bradyzoites.

For the new paper, the team temporarily opened holes in the parasite’s membrane and knocked out the existing copy of the CPL gene, or added a changed gene to make an altered form of CPL. This “gene therapy” approach allows them to study the impact of altered or absent CPL activity.

The Centers for Disease Control and Prevention has named Toxoplasma a “neglected parasitic infection” and a target for public health action. In addition to a high worldwide infection rate, CDC estimates that about 1 in 10 Americans carry the parasite.

In addition to undercooked meat that can spread Toxoplasma bradyzoite cysts, the parasite is often transmitted to humans through cat feces that contain another cyst form.

That’s why public health authorities advise pregnant women not to change cat litter boxes, and advise all those who eat meat to only consume it fully cooked.

The key danger from Toxoplasma is that it’s one of the few infections capable of crossing the blood-brain barrier. That means it can get into the nervous system, including the retina, spinal cord, and brain. It can also hide out in muscle tissue of both humans and animals.

Carruthers’ group used a drug to disable the parasite in infected human cells, but that drug cannot cross the blood-brain barrier so it will not be useful for treatment. However, he is working with the group led by Scott Larsen, Ph.D., in the U-M College of Pharmacy’s medicinal chemistry department to look for other drugs that can inhibit CPL.

“This paper is the proof of principle that protein digestion is important to the cyst stage of the parasite’s life cycle, though we don’t yet know if it digests to generate energy or to remove unneeded materials,” says Carruthers. “We still have much to learn about Toxoplasma, including how much of a barrier the cyst membrane is and whether we can inhibit it from outside.”

If the parasites in the cysts aren’t taking in ‘food’ from outside themselves, the autophagy process may be a self-preservation effort, similar to the wasting away of starving humans as their bodies consume muscle to stay alive. So blocking this process would make the cyst starve faster. Or, if food does make it in to cysts, disabling CPL could result in a microscopic “bowel obstruction” where waste and unused food build up to a lethal level.

Carruthers, whose team has studied the parasite for years, notes that any future drug aimed at the tissue cyst stage would have to travel through the cyst membrane, and the blood-brain barrier too.

In addition to Larsen, he works with Manlio Di Cristina, Ph.D., the new paper’s first author and a faculty member at the University of Perugia, Italy who holds an adjunct position at U-M. Beyond Di Cristina and Carruthers, the study’s authors include other members of the U-M and Perugia team, and colleagues from Stanford University, the Université de Montpellier in France, and Johns Hopkins University. The research was funded by the National Institutes of Health (AI120627, GM111703, AI060767) and the American Heart Association.