Neuroscientists discover how our brains track where we and others go 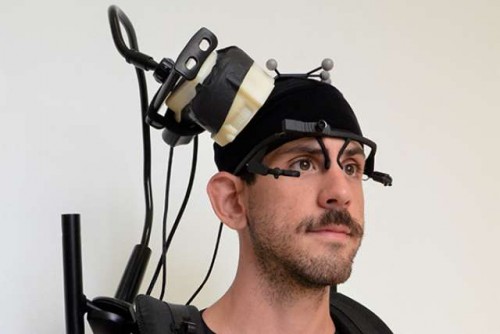 A wireless device records each patient's brain waves as they navigate an empty room. 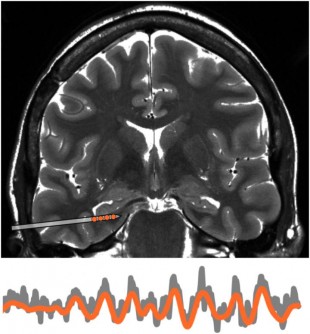 Orange dots indicate activity from an electrode implanted in the brain. 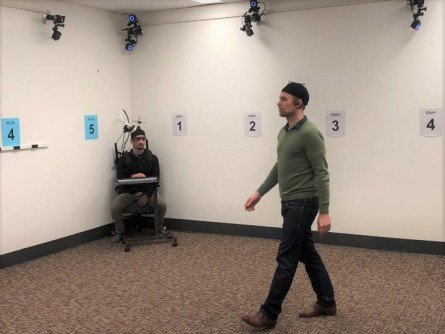 The experiment suggests that people's brains produce the same pattern to pinpoint where they and other people are located in a shared environment.

Newswise — As COVID cases rise, physically distancing yourself from other people has never been more important. Now a new UCLA study reveals how your brain navigates places and monitors someone else in the same location.

Published Dec. 23 in Nature, the findings suggest that our brains generate a common code to mark where other people are in relation to ourselves.

“We studied how our brain reacts when we navigate a physical space – first alone and then with others,” said senior author Nanthia Suthana, the Ruth and Raymond Stotter Chair in Neurosurgery and an assistant professor of neurosurgery and psychiatry at the David Geffen School of Medicine at UCLA and Jane and Terry Semel Institute for Neuroscience and Human Behavior.

“Our results imply that our brains create a universal signature to ourselves in someone else’s shoes,” added Suthana, whose laboratory studies how the brain forms and recalls memories.

Suthana and her colleagues observed epilepsy patients whose brains had been surgically implanted earlier with electrodes to control their seizures. The electrodes resided in the medial temporal lobe, the brain center linked to memory and suspected to regulate navigation, much like a GPS device.

“Earlier studies have shown that low-frequency brain waves by neurons in the medial temporal lobe help rodents keep track of where they are as they navigate a new place,” said first author Matthias Stangl, a postdoctoral scholar in Suthana’s lab. “We wanted to investigate this idea in people--and test whether they could also monitor others near them--but were hampered by existing technology.”

Using a $3.3 million award from the National Institutes of Health’s BRAIN Initiative, Suthana’s lab invented a special backpack containing a computer that wirelessly connects to brain electrodes. This enabled her to study research subjects as they moved freely instead of lying still in a brain scanner or hooked up to a recording device.

In this experiment, each patient wore the backpack and was instructed to explore an empty room, find a hidden spot and remember it for future searches. While they walked, the backpack recorded their brain waves, eye movements and paths through the room in real time.

As the participants searched the room, their brain waves flowed in a distinctive pattern, suggesting that each person’s brain had mapped out the walls and other boundaries. Interestingly, the patients’ brain waves also flowed in a similar manner when they sat in a corner of the room and watched someone else approach the location of the hidden spot.

The finding implies that our brains produce the same pattern to track where we and other people are in a shared environment.

Why is this important?

“Everyday activities require us to constantly navigate around other people in the same place,” said Suthana, who is also an assistant professor of psychology at UCLA’s College of Letters and Science and of bioengineering at the Henry Samueli School of Engineering. “Consider choosing the shortest airport security line, searching for a space in a crowded parking lot or avoiding bumping into someone on the dance floor.”

In a secondary finding, the UCLA team discovered that what we pay attention to may influence how our brains map out a location. For example, the patients’ brain waves flowed stronger when they searched for the hidden spot – or witnessed another person approach the location – than when they simply explored the room.

“Our results support the idea that, under certain mental states, this pattern of brain waves may help us recognize boundaries,” said Stangl. “In this case, it was when people were focused on a goal and hunting for something.”

Future studies will explore how people’s brain patterns react in more complex social situations, including outside the laboratory. The UCLA team has made the backpack available to other researchers to accelerate discoveries about the brain and brain disorders.

The study was supported with funding from the NIH’s Brain Initiative, McKnight Foundation and Keck Foundation.