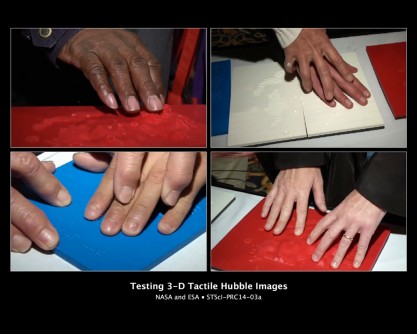 TESTING 3-D TACTILE HUBBLE IMAGES. These images show people with visual impairments using their fingers to explore 3-D tactile representations of images taken by NASA's Hubble Space Telescope. In these representations, stars, filaments, gas, and dust shown in Hubble images of the bright star cluster NGC 602 have been transformed through 3-D printing into textures, appearing as raised open circles, lines, and dots in the 3-D printout. These features also have different heights to correspond with their brightness. The tallest, and therefore brightest, features are a tight group of open circles, which represent the stars in the core of the cluster.

Newswise — Three-dimensional printers are transforming the business, medical, and consumer landscape by creating a vast variety of objects, including airplane parts, football cleats, lamps, jewelry, and even artificial human bones.

Now astronomers Carol Christian and Antonella Nota of the Space Telescope Science Institute in Baltimore, Md., are experimenting with the innovative technology to transform astronomy education by turning images from NASA's Hubble Space Telescope into tactile 3-D pictures for people who cannot explore celestial wonders by sight. The 3-D print design is also useful and intriguing for sighted people who have different learning styles, said the researchers. Christian and Nota admit their task is a challenge because astronomers really can't see space objects in three dimensions.

"It's very easy to take any tool or object that you can actually measure and produce a 3-D printout," Nota said. "But it's very hard to think of an astronomical object about which you know very little. You can measure the sizes and brightnesses of space objects from the images, as well as some of the distances. But it's really hard to understand their 3-D structure. The work is scientific, but it's also guesswork and artistry to try to produce an object, which printed, will look like the image that Hubble has taken. So, we are basically designing the process from scratch."

The duo started their foray into 3-D printing seven months ago when they received a small Hubble education and public outreach grant that allowed them to buy a 3-D printer and experiment with the technology to make Hubble tactile images. They started with a Hubble image of the bright star cluster NGC 602, located in our neighboring galaxy the Small Magellanic Cloud. The Hubble portrait reveals the brilliant blue glow of newly formed stars nestled within a cavity of gas and dust, shaped like a geode. Turning this stunning 2-D image into a 3-D tactile picture involved plenty of trial and error. Their quest was to create 3-D pictures that allow visually impaired people to feel what they cannot see and form a picture of the cluster in their minds.

So far, the scientists have developed 3-D tactile prototype representations in plastic showing the stars, filaments, gas, and dust seen in the visual image using textures such as raised open circles, lines, and dots in the 3-D printout. These features also have different heights to correspond with their brightness. The tallest, and therefore brightest, features are a tight group of open circles, which represent the stars in the core of the cluster. The astronomers will present their 3-D representations of NGC 602 at a press conference Tuesday, Jan. 7, at the American Astronomical meeting in National Harbor, Md.

The 3-D printouts of NGC 602 are just the first few baby steps toward Christian and Nota's goal of creating a 3-D model of the cluster in the shape of a geode that people will be able to hold in their hands and study.

"Imagine making a visualization that you visually fly through, and as you fly through, first you encounter filaments, and then you see some dust and also some stars," Christian said. "As you fly to the back side of the cavity, you see other features. I want to represent that in 3-D and have people feel it with their fingers because they can't see it. They would be able to spatially understand where important features are relative to everything else and what the structure is. We may have to do it in layers, or we may have to do it in some other way. At this point we're jumping off the platform and seeing what happens."

To accomplish their goal, the two scientists have assembled a team of experts adept in software design and in developing programs for people with visual impairments. Perry Greenfield, manager of the Space Telescope Science Institute's science software branch, took on the task of producing a combination of inexpensive commercial and custom-developed software to turn the measurements from Hubble images into something the 3-D printers could successfully print. This software is being used to make the Hubble 3-D tactile prototypes of the texture maps and the 3-D printouts that combine the textured features and their brightnesses.

Noreen Grice, an author of several tactile astronomy books, helped select the textures to represent the individual features in the Hubble 3-D images. Grice, the president of You Can Do Astronomy L.L.C., based in Connecticut, is a pioneer in making astronomy accessible to people with visual impairments, including creating tactile embossed images of astronomical objects on a specially coated paper, called swell form. The challenge for the group was to come up with distinct textures for the gas, dust, and stars that would be clearly perceived by blind and visually impaired viewers. "We want to make sure that they can experience the texture and correctly identify it," Christian explained. "We were amazed during testing how quickly people identified the individual features and appreciated the complexity of the star cluster after using the printouts for a few minutes."

So far, the group has tested the prototype images with about 100 people with visual impairments at several events sponsored by the Baltimore-based National Federation of the Blind (NFB), including at its national convention last July in Orlando, Fla., and at a science, technology, engineering, and mathematics education program for blind youth last summer, hosted at Towson University in Maryland. Early low-resolution prototypes were created in partnership with Amy Hurst and Shaun Kane at the University of Maryland Baltimore County in Catonsville. Tested at the NFB's national convention in July, the early prototypes gave a glimpse of the potential the technology could have for astronomy.

The testing has helped the group fine-tune the 3-D representations. Grice discovered through testing, for example, that the textures that were distinctive on the swell-form paper were not always as clearly perceived on the 3-D plastic prints. Greenfield agreed that selecting the right textures was a challenge. "I think the important thing for blind and visually impaired people is to be able to move easily across the image, and anything that sticks up a lot gets in the way," he said. "You don't want these sudden, big obstacles. So, to represent the stars, for example, we decided to use what looks like craters. They have a very distinctive edge to them, as opposed to a flat circle."

The 3-D tactile prototypes already have been a big hit with many people with visual impairments. More than 60 of them provided feedback on the 3-D tactile images of NGC 602 at the National Federation of the Blind state conventions in Maryland and Connecticut. "These 3-D images make me feel great because images of space objects were inaccessible and now all of a sudden they are accessible," said Nijat Worley of Baltimore, at the NFB's state convention Nov. 8 in Ocean City, Md. "Sure, we cannot see the image, so we don't know exactly what it looks like. It can never replace pictures, but with this 3-D image you can get an idea of what it's supposed to look like and then use your imagination for the rest."

Natalie Shaheen, director of education for the National Federation of the Blind, believes the 3-D technology opens a new way to provide access to information for the blind. "The nice thing about 3-D printing is that it's a mainstream technology," Shaheen said. "It is not specific to blindness. There are many people who want and need and have 3-D printers who are not blind. Three-dimensional technology shows that you don't have to have some blindness-specific technology necessarily in order to provide a blind person with access to information."

Greenfield, the project's computer programmer, is now helping Christian and Nota design a way of rendering the nebula's structure onto a sphere that represents its true three-dimensional shape. Grice can't wait to see it. She thinks the 3-D technology is taking tactile astronomical images to a whole new level that will benefit everyone, both sighted and blind people. "When you look up at the night sky and you see the stars against a dark, velvety texture, the stars look like they are flat on the sky," she said. "But imagine that you could reach up and touch the stars up there. I think the 3-D tactile images are akin to that: being able to put yourself in the object. It really takes you to a completely different level."

Christian and Nota's long-term goal is to produce 3-D tactile pictures of all Hubble images and make them available online to schools, libraries, and the public to print using 3-D printers.

"Our ultimate goal of having the 3-D image files available to everybody is for the long-term future," Nota said. "But you have to think big when you're doing something like this. Maybe sometime in the future you will be able to press a button and out comes the object Hubble has imaged, and you will be able to hold it in your hands."