Hubble Probes the Archeology of Our Milky Way's Ancient Hub 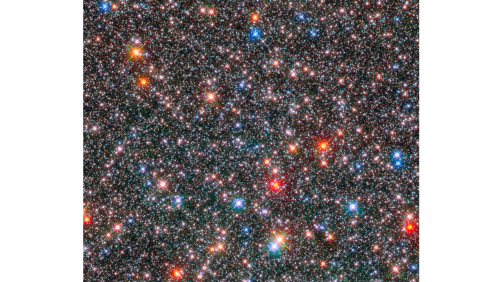 This Hubble Space Telescope image of a sparkling jewel box full of stars captures the heart of our Milky Way galaxy. Aging red giant stars coexist with their more plentiful younger cousins, the smaller, white, Sun-like stars, in this crowded region of our galaxy's ancient central hub, or bulge. Most of the bright blue stars in the image are probably recently formed stars located in the foreground, in the galaxy's disk. Astronomers studied 10,000 of these Sun-like stars in archival Hubble images over a nine-year period to unearth clues to our galaxy's evolution. The study reveals that the Milky Way's bulge is a dynamic environment of variously aged stars zipping around at different speeds, like travelers bustling about a busy airport. The researchers found that the motions of bulge stars are different, depending on a star's chemical composition. Stars richer in elements heavier than hydrogen and helium have less disordered motions, but are orbiting around the galactic center faster than older stars that are deficient in heavier elements. The image is a composite of exposures taken in near-infrared and visible light with Hubble's Wide Field Camera 3. The observations are part of two Hubble surveys: the Galactic Bulge Treasury Program and the Sagittarius Window Eclipsing Extrasolar Planet Search. The center of our galaxy is about 26,000 light-years away. 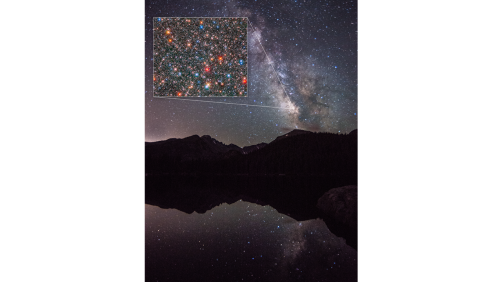 A VIEW OF THE HEART OF OUR MILKY WAY FROM EARTH. The vast edge-on stretch of our home galaxy, the Milky Way, is seen intersecting the night sky above the silhouetted Rocky Mountains in this photograph. The Milky Way noticeably widens at lower right. This wider area is the central hub, or bulge, of our galaxy. Peering into a very narrow region of the core, astronomers used the Hubble Space Telescope to study the compositions and motions of 10,000 Sun-like stars, as seen in the inset Hubble image. The analysis reveals that our galaxy's bulge is an unexpectedly dynamic environment of stars of various ages zipping around at different speeds, like travelers bustling about a busy airport. The study yields important new clues to the complexity of the central bulge and our Milky Way's evolution over billions of years. The Hubble image is a composite of exposures taken in near-infrared and visible light with Hubble's Wide Field Camera 3. The observations are part of two Hubble surveys: the Galactic Bulge Treasury Program and the Sagittarius Window Eclipsing Extrasolar Planet Search. The center of our galaxy is 26,000 light-years away.

Newswise — For many years, astronomers had a simple view of our Milky Way's central hub, or bulge, as a quiescent place composed of old stars, the earliest homesteaders of our galaxy.

However, because the inner Milky Way is such a crowded environment, it has always been a challenge to disentangle stellar motions to probe the bulge in detail.

Now, a new analysis of about 10,000 normal Sun-like stars in the bulge reveals that our galaxy's hub is a dynamic environment of stars of various ages zipping around at different speeds, like travelers bustling about a busy airport. This conclusion is based on nine years' worth of archival data from NASA's Hubble Space Telescope.

The Hubble study of this complicated, chaotic heart of our Milky Way may provide new clues to the evolution of our galaxy, said researchers.

The research team, led by Will Clarkson of the University of Michigan-Dearborn, found that the motions of bulge stars are different, depending on a star's chemical composition. Stars richer in elements heavier than hydrogen and helium have less disordered motions, but are orbiting around the galactic center faster than older stars that are deficient in heavier elements.

"There are many theories describing the formation of our galaxy and central bulge," said Annalisa Calamida of the Space Telescope Science Institute, Baltimore, Maryland, a member of the Hubble research team. "Some say the bulge formed when the galaxy first formed about 13 billion years ago. In this case, all bulge stars should be old and share a similar motion. But others think the bulge formed later in the galaxy's lifetime, slowly evolving after the first generations of stars were born. In this scenario, some of the stars in the bulge might be younger, with their chemical composition enriched in heavier elements expelled from the death of previous generations of stars, and they should show a different motion compared to the older stars. The stars in our study are showing characteristics of both models. Therefore, this analysis can help us in understanding the bulge's origin."

The astronomers divided the stars by their chemical compositions and then compared the motions of each group. They determined the stars' chemical content by studying their colors and divided them in two main groups according to their heavy-element (iron) abundance. The chemically enriched stars are moving twice as fast as the other population.

"By analyzing nine years' worth of data in the archive and improving our analysis techniques, we have made a clear, robust detection of the differences in the motion for chemically deficient and chemically enriched Sun-like stars," Clarkson said. "We hope to continue our analysis, which will allow us to make a three-dimensional chart of the rich chemical and dynamical complexity of the populations in the bulge."

The astronomers based their analysis on Advanced Camera for Surveys and Wide Field Camera 3 data from two Hubble surveys: the Wide Field Camera 3 Galactic Bulge Treasury Program and the Sagittarius Window Eclipsing Extrasolar Planet Search. Sets of spectra from the European Southern Observatory's Very Large Telescope in Chile were used to help estimate the chemical compositions of stars.

The team studied Sun-like stars because they are so abundant and easily within Hubble's reach. Previous observations looked at brighter, aging red giant stars, which are not as plentiful because they represent a brief episode in a star's lifetime. "Hubble gave us a narrow, pencil-beam view of the galaxy’s core, but we are seeing thousands more stars than those spotted in earlier studies," Calamida said. The Milky Way's bulge is roughly one-tenth the diameter of our pancake-shaped galaxy. "We next plan to extend our analysis to do additional observations along different sight-lines, which will allow us to make a three-dimensional probe of the rich complexity of the populations in the bulge," Clarkson added.

The researchers said that this work is also an important pathfinder for NASA's James Webb Space Telescope to probe the archaeology of the Milky Way. Scheduled for launch in 2019, Webb is expected to more deeply probe stellar populations in the Milky Way bulge.

The research team will present its findings Thursday, Jan. 11, at the 231st meeting of the American Astronomical Society in Washington, D.C.

For images of the Milky Way bulge and more information about Hubble, visit: