Located nearly 500 million miles away, the planet Jupiter is best known for its Great Red Spot. The spot is really a huge storm... big enough to swallow Earth. This series of Hubble Space Telescope photos spanning nearly two decades shows the Great Red Spot shrinking to the smallest size ever measured by astronomers. Scientists do not know why this legendary storm is changing. [TRT: 29 seconds] 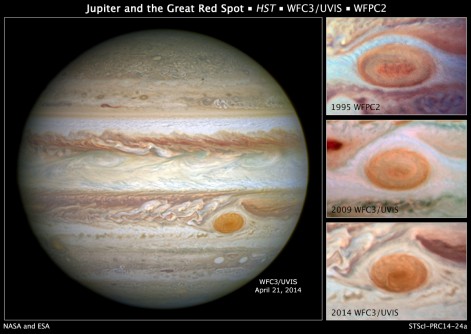 Jupiter's monster storm, the Great Red Spot, was once so large that three Earths would fit inside it. But new measurements by NASA's Hubble Space Telescope reveal that the largest storm in our solar system has downsized significantly. The Great Red Spot, which has been raging for at least a hundred years, is only the width of one Earth. What is happening? One possibility is that some unknown activity in the planet's atmosphere may be draining energy and weakening the storm, causing it to shrink. The Hubble images were taken in 1995, 2009, and 2014. Join Hubble astronomers for further discussion about Jupiter's shrinking Great Red Spot at 4pm EDT on Thursday, May 22, at https://www.youtube.com/watch?v=9coSaxpQ8DQ. Please bring your questions and comments.

Newswise — Jupiter's trademark Great Red Spot - a swirling anticyclonic storm feature larger than Earth - has shrunken to the smallest size ever measured. Astronomers have followed this downsizing since the 1930s.

"Recent Hubble Space Telescope observations confirm that the Great Red Spot (GRS) is now approximately 10,250 miles across, the smallest diameter we've ever measured," said Amy Simon of NASA's Goddard Space Flight Center in Greenbelt, Maryland. Historic observations as far back as the late 1800s gauged the GRS to be as big as 25,500 miles on its long axis. The NASA Voyager 1 and Voyager 2 flybys of Jupiter in 1979 measured the GRS to be 14,500 miles across.

Starting in 2012, amateur observations revealed a noticeable increase in the spot's shrinkage rate. The GRS's "waistline" is getting smaller by 580 miles per year. The shape of the GRS has changed from an oval to a circle. The cause behind the shrinking has yet to be explained.

"In our new observations it is apparent that very small eddies are feeding into the storm," said Simon. "We hypothesized that these may be responsible for the sudden change by altering the internal dynamics and energy of the Great Red Spot."

Simon's team plans to study the motions of the small eddies and also the internal dynamics of the GRS to determine if these eddies can feed or sap momentum entering the upwelling vortex.

The full disk image of Jupiter on the left was taken on April 21, 2014, with Hubble's Wide Field Camera 3.

And join Hubble astronomers for further discussion about Jupiter's shrinking Great Red Spot at 4pm EDT on Thursday, May 22, at https://www.youtube.com/watch?v=9coSaxpQ8DQ. Please bring your questions and comments.

The Hubble Space Telescope is a project of international cooperation between NASA and the European Space Agency. NASA's Goddard Space Flight Center in Greenbelt, Maryland, manages the telescope. The Space Telescope Science Institute (STScI) in Baltimore conducts Hubble science operations. STScI is operated for NASA by the Association of Universities for Research in Astronomy, Inc., in Washington, D.C.