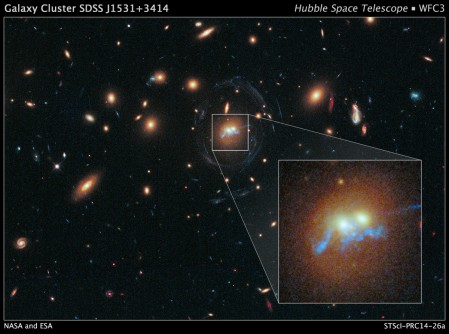 This is a Hubble Space Telescope photograph of a never-before-seen string of pearls twisted into a corkscrew shape that winds around the cores of two colliding galaxies. The "pearls" are superclusters of blazing, blue-white, newly born stars. The whole assembly must result from the gravitational tidal forces present in the galaxy collision. The serendipitous discovery was made while astronomers were studying the galaxy cluster SDSS J1531+3414. The underlying physics behind the "beads on a string" shape is related to describing the behavior of self-gravitating clumps of gas. It's analogous to the process where rain falls in drops rather than in continuous filaments from clouds. It's called the Jeans instability, and it can play out on distance scales of enormous orders of magnitude.

Newswise — NASA's Hubble Space Telescope has photographed an unusual structure 100,000 light-years long, which resembles a corkscrew-shaped string of pearls and winds around the cores of two colliding galaxies.

The unique structure of the star spiral may yield new insights into the formation of stellar superclusters that result from merging galaxies and gas dynamics in this rarely seen process.

"We were surprised to find this stunning morphology. We've long known that the 'beads on a string' phenomenon is seen in the arms of spiral galaxies and in tidal bridges between interacting galaxies. However, this particular supercluster arrangement has never been seen before in giant merging elliptical galaxies," said Grant Tremblay of the European Southern Observatory in Garching, Germany.

Young, blue super star clusters are evenly spaced along the chain through the galaxies at separations of 3,000 light-years. The pair of elliptical galaxies is embedded deep inside the dense galaxy cluster known as SDSS J1531+3414. The cluster's powerful gravity warps the images of background galaxies into blue streaks and arcs that give the illusion of being inside the cluster, an effect known as gravitational lensing.

Observing astronomers first hypothesized that the "string of pearls" was actually a lensed image from one of these background galaxies, but their recent follow-up observations with the Nordic Optical Telescope in Santa Cruz de Tenerife, Spain, ruled out this hypothesis.

The galaxy cluster is part of a Hubble program to observe 23 massive clusters that create powerful gravitational lensing effects on the sky. The clusters were first cataloged in the Sloan Digital Sky Survey (SDSS), a project to create the most detailed three-dimensional maps ever made of the universe. Tremblay's team discovered the bizarre string of stellar superclusters by chance, while reviewing images as they came in from Hubble. Researchers were stunned by what they saw in SDSS J1531+3414, and the unique nature of the source spurred the team to do follow-up observations with both ground- and space-based telescopes.

The underlying physical processes that give rise to the "string of pearls" structure are related to the Jeans instability, a physics phenomenon that occurs when the internal pressure of an interstellar gas cloud is not strong enough to prevent gravitational collapse of a region filled with matter, resulting in star formation. This process is analogous to that which causes a column of water falling from a rain cloud to disrupt, and rain to fall in drops rather than in continuous streams.

Scientists currently are working on a better understanding of the star chain's origin. One possibility is that the cold molecular gas fueling the burst of star formation may have been native to the two merging galaxies. Another possibility is a so-called "cooling flow" scenario, where gas cools from the ultra-hot (10 million degree) atmosphere of plasma that surrounds the galaxies, forming pools of cold molecular gas that starts to form stars. The third possibility is that the cold gas fueling the chain of star formation originates from a high-temperature shock wave created when the two giant elliptical galaxies crash together. This collision compresses the gas and creates a sheet of dense cooling plasma.

"Whatever the origin for this star-forming gas is, the result is awesome. It's very exciting. You can't find a mundane explanation for this," Tremblay said. For images and more information about Hubble, visit:

The Hubble Space Telescope is a project of international cooperation between NASA and the European Space Agency. NASA's Goddard Space Flight Center in Greenbelt, Maryland, manages the telescope. The Space Telescope Science Institute (STScI) in Baltimore conducts Hubble science operations. STScI is operated for NASA by the Association of Universities for Research in Astronomy, Inc., in Washington, D.C.