Hubble Uncovers a Galaxy Pair Coming in From the Wilderness 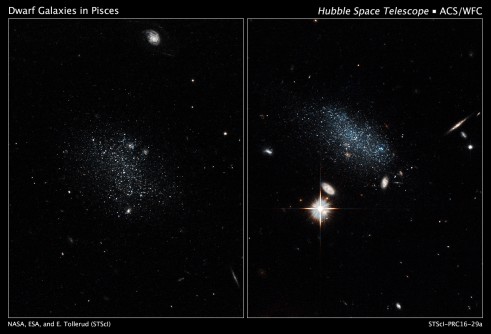 NASA's Hubble Space Telescope has captured the glow of new stars in these small, ancient galaxies. Pisces A is on the left and Pisces B is on the right. Astronomers estimate that less than 100 million years ago both galaxies doubled their star-formation rate. An analysis of the stars' colors reveals that the galaxies contain about 20 to 30 bright blue stars. The blue color is a sign they are young, less than 100 million years old. Each galaxy contains about 10 million stars. In the image of Pisces A, at left, the bright object at the top of the image is a distant background galaxy. Other distant background galaxies are visible as bright dots. In the image of Pisces B, at right, the bright object with the diffraction spikes below left of center is a foreground star in our Milky Way galaxy. Several distant background galaxies are also visible. Hubble observations suggest that Pisces A and Pisces B should have produced the bulk of their stars long ago. But the puny galaxies dwelled for billions of years in the Local Void, a region of the universe sparsely populated with galaxies. Now the galaxies have moved into a region packed with galaxies and intergalactic gas. This dense environment is triggering star birth. Pisces A is roughly 19 million light-years away and Pisces B about 30 million light-years away. The image of Pisces A was taken on Oct. 30, 2014, by Hubble's Advanced Camera for Surveys. The image of Pisces B was taken on Nov. 8, 2014, by Hubble's Advanced Camera for Surveys. The science team consists of Erik J. Tollerud, Space Telescope Science Institute (STScI), Baltimore, Maryland; Marla C. Geha, Yale University, New Haven, Connecticut; Jana Grcevich, American Museum of Natural History, New York, New York; Mary E. Putman, Columbia University, New York, New York; Daniel R. Weisz, University of Washington, Seattle; and Andrew E. Dolphin, Raytheon Co., Tucson, Arizona.

Hubble Uncovers a Galaxy Pair Coming in from the Wilderness

Newswise — NASA's Hubble Space Telescope has uncovered two tiny dwarf galaxies that have wandered from a vast cosmic wilderness into a nearby "big city" packed with galaxies. After being quiescent for billions of years, they are ready for partying by starting a firestorm of star birth.

"These Hubble images may be snapshots of what present-day dwarf galaxies may have been like at earlier epochs," said lead researcher Erik Tollerud of the Space Telescope Science Institute in Baltimore, Maryland. "Studying these and other similar galaxies can provide further clues to dwarf galaxy formation and evolution."

The Hubble observations suggest that the galaxies, called Pisces A and B, are late bloomers because they have spent most of their existence in the Local Void, a region of the universe sparsely populated with galaxies. The Local Void is roughly 150 million light-years across.

Under the steady pull of gravity from the galactic big city, the loner dwarf galaxies have at last entered a crowded region that is denser in intergalactic gas. In this gas-rich environment, star birth may have been triggered by gas raining down on the galaxies as they plow through the denser region. Another idea is that the duo may have encountered a gaseous filament, which compresses gas in the galaxies and stokes star birth. Based on the galaxies' locations, Tollerud's team determined that the objects are at the edge of a nearby filament of dense gas. Each galaxy contains about 10 million stars. Dwarf galaxies are the building blocks from which larger galaxies were formed billions of years ago in the early universe. Inhabiting a sparse desert of largely empty space for most of the universe’s history, these two galaxies avoided that busy construction period.

"These galaxies may have spent most of their history in the void," Tollerud explained. "If this is true, the void environment would have slowed their evolution. Evidence for the galaxies' void address is that their hydrogen content is somewhat high relative to similar galaxies. In the past, galaxies contained higher concentrations of hydrogen, the fuel needed to make stars. But these galaxies seem to retain that more primitive composition, rather than the enriched composition of contemporary galaxies, due to a less vigorous history of star formation. The galaxies also are quite compact relative to the typical star-forming galaxies in our galactic neighborhood."

The dwarf galaxies are small and faint, so finding them is extremely difficult. Astronomers spotted them by using radio telescopes in a unique survey to measure the hydrogen content in our Milky Way. The observations captured thousands of small blobs of dense hydrogen gas. Most of them are gas clouds within our galaxy, but astronomers identified 30 to 50 of those blobs as possible galaxies. The researchers used the WIYN telescope in Arizona to study 15 of the most promising candidates in visible light. Based on those observations, Tollerud's team selected the two that were the most likely candidates to be nearby galaxies and analyzed them with Hubble's Advanced Camera for Surveys. Hubble's sharp vision helped the astronomers confirm that both of them, Pisces A and B, are dwarf galaxies.

The Hubble telescope is aptly suited to study nearby, dim dwarf galaxies because its sharp vision can resolve individual stars and help astronomers estimate the galaxies' distances. Distance is important for determining a galaxy's brightness, and, in these Hubble observations, for calculating how far away the galaxies are from nearby voids. Pisces A is about 19 million light-years from Earth and Pisces B roughly 30 million light-years away.

An analysis of the stars' colors allowed the astronomers to trace the star formation history of both galaxies. Each galaxy contains about 20 to 30 bright blue stars, a sign that they are very young, less than 100 million years old. Tollerud's team estimates that less than 100 million years ago, the galaxies doubled their star-formation rate. Eventually, the star formation may slow down again if the galaxies become satellites of a much larger galaxy.

"The galaxies could even probably stop forming stars all together, because they will stop getting new gas to make stars," Tollerud said. "So they will use up their existing gas. But it's hard to tell right now exactly when that would happen, so it's a reasonable guess that the star formation will ramp up at least for a while."

Tollerud's team hopes to observe other similar galaxies with Hubble. He also plans to scour the Panoramic Survey Telescope & Rapid Response System (Pan-STARRS) survey for potential dwarf galaxies. Future wide-survey telescopes, such as the Large Synoptic Survey Telescope (LSST) in Chile and the large radio telescope in China, should be able to find many of these puny galactic neighbors.

The team's results will appear in the Aug. 11 issue of The Astrophysical Journal.

The Hubble Space Telescope is a project of international cooperation between NASA and the European Space Agency. NASA's Goddard Space Flight Center in Greenbelt, Maryland, manages the telescope. The Space Telescope Science Institute (STScI) in Baltimore, Maryland, conducts Hubble science operations. STScI is operated for NASA by the Association of Universities for Research in Astronomy in Washington, D.C.

For images and more information about Pisces A and B and Hubble, visit: