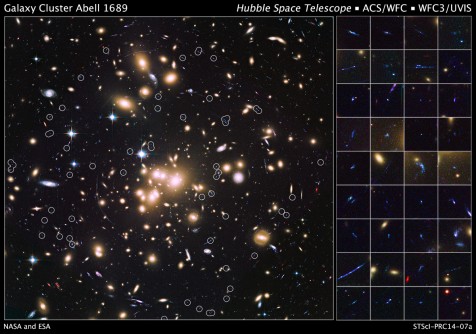 NASA, ESA, and B. Siana and A. Alavi (University of California, Riverside)

HUBBLE UNCOVERS THE SMALLEST AND FAINTEST GALAXIES. Astronomers used the sharp eye of NASA's Hubble Space Telescope and the magnification power of the giant cluster of galaxies Abell 1689 to find 58 remote galaxies. They are the smallest, faintest, and most numerous galaxies ever seen in the remote universe. The white circles sprinkled throughout the image of the galaxy cluster on the left pinpoint the location of the magnified images of most of the faraway galaxies. The image is a blend of exposures taken by Hubble's Advanced Camera for Surveys and Wide Field Camera 3. Seeing the tiny galaxies mixed in with the cluster galaxies is an illusion. They are actually far away from Abell 1689. Hubble photographed the distant galaxies as they appeared more than 10 billion years ago, during the heyday of star birth. The galaxies would normally be too faint for Hubble to see. To detect them, astronomers teamed Hubble with Abell 1689, which magnified the light from the galaxies behind it due to a phenomenon called gravitational lensing. Gravity warps space, acting like a giant funhouse mirror to stretch and brighten distant objects, allowing Hubble to resolve them. The postage stamp-sized images on the right show 36 of the distant galaxies. Their bright blue color reveals that they are ablaze with star birth. Hubble's Wide Field Camera 3 captured these images of the galaxies in ultraviolet light, a reliable tracer of star birth. The Hubble analysis shows that they are irregularly shaped and measure just a few thousand light-years across. These galaxies are about one-tenth the mass of the typical progenitors of galaxies like our Milky Way. Abell 1689 is 2.5 billion light-years from Earth.

Newswise — NASA's Hubble Space Telescope has uncovered the long-suspected underlying population of galaxies that produced the bulk of new stars during the universe's early years. They are the smallest, faintest, and most numerous galaxies ever seen in the remote universe, captured by Hubble deep exposures taken in ultraviolet light.

The 58 young, diminutive galaxies spied by Hubble were photographed as they appeared more than 10 billion years ago, during the heyday of star birth. The newly discovered galaxies are 100 times more numerous than their more massive cousins. But they are 100 times fainter than galaxies typically detected in previous deep-field surveys of the early universe.

The results are being presented at the 223rd meeting of the American Astronomical Society in National Harbor, Md.

These galaxies would normally be too faint for Hubble to see. To detect them, astronomers teamed Hubble with a natural zoom lens in space, produced by the gravity of a giant foreground galaxy cluster, Abell 1689. The cluster is so massive that it magnifies the light from faraway galaxies behind it due to a phenomenon called gravitational lensing, where the curvature of space acts like a giant funhouse mirror to stretch and brighten distant objects.

"There's always been a concern that we've only found the brightest of the distant galaxies," said study leader Brian Siana of the University of California, Riverside. "The bright galaxies, however, represent the tip of the iceberg. We believe most of the stars forming in the early universe are occurring in galaxies we normally can't see at all. Now we have found those 'unseen' galaxies, and we're really confident that we're seeing the rest of the iceberg."

Siana's team believes it has completed the census of galaxies at an epoch when the universe was roughly 3.4 billion years old. If this sample of galaxies is representative of the entire population at this early time, then 80 percent of new stars formed in these small galaxies. "Though these galaxies are very faint, their increased numbers mean that they account for the majority of star formation during this epoch," said team member Anahita Alavi, also of the University of California, Riverside, and first author on the science paper describing the results.

These objects do not look like the majestic spiral and elliptical galaxies seen in our galactic neighborhood. "The gravitational lensing stretches out the apparent shape of the distant galaxies, resolving them. Without the lensing, some of the galaxies would be just point sources to Hubble. We now have an idea about their sizes that previously were impossible to measure because the galaxies were unresolved," said Alavi. The Hubble analysis shows they are small, irregularly shaped objects measuring just a few thousand light-years across. Even when fully mature, these galaxies will be about one-tenth to one one-hundredth the mass the Milky Way. Because they are undergoing a firestorm of star birth, their light is dominated by the ultraviolet glow of fledgling stars.

The research team used Hubble's Wide Field Camera 3 to search for faint, star-forming galaxies in ultraviolet light, a reliable tracer of star birth. The galaxies existed when the universe was undergoing a "baby boom" of star formation, estimated to have peaked between 9 billion and 12 billion years ago.

"Our goal with these observations was not to find a large number of galaxies, but to find much fainter galaxies," Alavi explained.

This strategy of surveying large numbers of background galaxies with deep observations of lensing clusters is being used in a new three-year Hubble survey, called the Frontier Fields. Hubble astronomers are using Hubble to exploit the magnification powers of six massive galaxy clusters in a hunt for small galaxies that existed more than 12 billion to 13 billion years ago.

The galaxies discovered in these lensing surveys will be prime targets for NASA’s James Webb Space Telescope, an infrared observatory scheduled to launch in 2018. Through spectroscopy, Webb will be able to divide the light from each galaxy into its constituent colors. This analysis yields information on the star birth and chemical content of each galaxy.

The team's results appear in the December 2013 online edition of The Astrophysical Journal.

For images and more information about Abell 1689, visit:

For more information about the Hubble Space Telescope, visit: