HUBBLE VIEWS STELLAR GENESIS IN THE SOUTHERN PINWHEEL (Pan and Zoom). Astronomers using NASA's Hubble Space Telescope focused on the barred spiral galaxy M83, also known as the Southern Pinwheel, located 15 million light-years away. By assembling a number of Hubble images, scientists have made a mosaic of the iconic galaxy. This image shows billions of stars at various stages of life spread across 50,000 light-years. 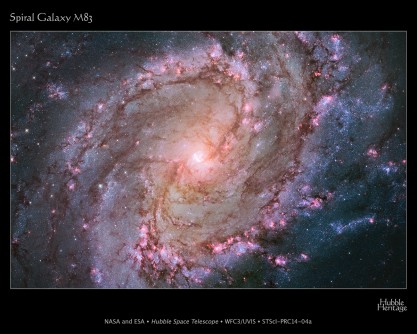 NEARBY SPIRAL GALAXY IS A HOTBED OF STAR BIRTH. The vibrant magentas and blues in this Hubble image of the barred spiral galaxy M83 reveal that the galaxy is ablaze with star formation. The galactic panorama unveils a tapestry of the drama of stellar birth and death. The galaxy, also known as the Southern Pinwheel, lies 15 million light-years away in the constellation Hydra. The images were taken with Hubble's Wide Field Camera 3 in August 2009 to September 2012.

Newswise — A photogenic and favorite target for amateur astronomers, the full beauty of nearby barred spiral galaxy M83 is unveiled in all of its glory in this Hubble Space Telescope mosaic image. The vibrant magentas and blues reveal the galaxy is ablaze with star formation. The galaxy, also known as the Southern Pinwheel, lies 15 million light-years away in the constellation Hydra.

The Hubble photograph captures thousands of star clusters, hundreds of thousands of individual stars, and "ghosts" of dead stars called supernova remnants. The galactic panorama unveils a tapestry of the drama of stellar birth and death spread across 50,000 light-years.

The newest generations of stars are forming largely in clusters on the edges of the dark spiral dust lanes. These brilliant young stellar groupings, only a few million years old, produce huge amounts of ultraviolet light that is absorbed by surrounding diffuse gas clouds, causing them to glow in pinkish hydrogen light.

Gradually, the fierce stellar winds from the youngest, most massive stars blow away the gas, revealing bright blue star clusters and giving a "Swiss Cheese" appearance to the spiral arms. These youngest star clusters are about 1 million to 10 million years old. The populations of stars up to 100 million years or older appear yellow or orange by comparison because the young blue stars have already burned out.

Interstellar "bubbles" produced by nearly 300 supernovas from massive stars have been found in this Hubble image. By studying these supernova remnants, astronomers can better understand the nature of the stars that exploded and dispersed nuclear processed chemical elements back into the galaxy, contributing to the next generation of new stars.

This image is being used to support a citizen science project titled STAR DATE: M83. The primary goal is to estimate ages for approximately 3,000 star clusters. Amateur scientists will use the presence or absence of the pink hydrogen emission, the sharpness of the individual stars, and the color of the clusters to estimate ages. Participants will measure the sizes of the star clusters and any associated emission nebulae. Finally, the citizen scientists will "explore" the image, identifying a variety of objects ranging from background galaxies to supernova remnants to foreground stars.

STAR DATE: M83 is a joint collaborative effort between the Space Telescope Science Institute and Zooniverse, creators of several citizen science projects including Galaxy Zoo, Planet Hunters, and the Andromeda Project (go to www.zooniverse.org to see the full list). The M83 project is scheduled to launch on Monday, January 13, 2014. People interested in exploring this remarkable image in more detail, and in directly participating in a science project, can visit www.projectstardate.org.

For more information about the Hubble Space Telescope visit: