Hubble's Sweeping View of the Coma Cluster of Galaxies

ZOOMING INTO THE COMA CLUSTER OF GALAXIES The Coma Cluster of galaxies is one of the densest collections of galaxies in the universe. The Hubble Space Telescope's Advanced Camera for Surveys viewed a large portion of the cluster, spanning several million light-years across. This cluster contains thousands of galaxies and lies near the Milky Way's north pole, about 300 million light-years away from Earth. This movie combines the work of ground- and space-based observations. Its first part starts with a ground-based image from Akira Fujii, then transitions to imaging from the Digitized Sky Survey. The zoom ends with a closer look at the Hubble Advanced Camera for Surveys mosaic of the Coma Cluster. 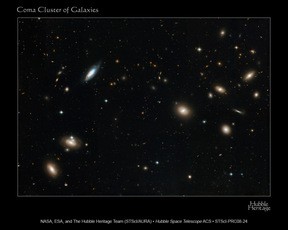 The Hubble's Advanced Camera for Surveys viewed a large portion of the Coma Cluster, spanning several million light-years across. The entire cluster is more than 20 million light-years in diameter, has a spherical shape, and contains thousands of galaxies. Most of the galaxies that inhabit the central portion of the Coma Cluster are ellipticals. These featureless "fuzz-balls" are pale goldish brown in color and contain populations of old stars. Both dwarf, as well as giant ellipticals, are found in abundance in the Coma Cluster.

Newswise — NASA's Hubble Space Telescope captures the magnificent starry population of the Coma Cluster of galaxies, one of the densest known galaxy collections in the universe.

Also known as Abell 1656, the Coma Cluster is over 300 million light-years away. The cluster, named after its parent constellation Coma Berenices, is near the Milky Way's north pole. This places the Coma Cluster in an area unobscured by dust and gas from the plane of the Milky Way, and easily visible by Earth viewers.

Most of the galaxies that inhabit the central portion of the Coma Cluster are ellipticals. These featureless "fuzz-balls" are pale goldish brown in color and contain populations of old stars. Both dwarf, as well as giant ellipticals, are found in abundance in the Coma Cluster.

Farther out from the center of the cluster are several spiral galaxies. These galaxies have clouds of cold gas that are giving birth to new stars. Spiral arms and dust lanes "accessorize" these bright bluish-white galaxies that show a distinctive disk structure.

In between the ellipticals and spirals is a morphological class of objects known as S0 (S-zero) galaxies. They are made up of older stars and show little evidence of recent star formation; however, they do show some assemblage of structure -- perhaps a bar or a ring, which may give rise to a more disk-like feature.

This Hubble image consists of a section of the cluster that is roughly one-third of the way out from the center of the cluster. One bright spiral galaxy is visible in the upper left of the image. It is distinctly brighter and bluer than galaxies surrounding it. A series of dusty spiral arms appears reddish brown against the whiter disk of the galaxy, and suggests that this galaxy has been disturbed at some point in the past. The other galaxies in the image are either ellipticals, S0 galaxies, or background galaxies far beyond the Coma Cluster sphere.

The data of the Coma Cluster were taken as part of a survey of a nearby rich galaxy cluster. Collectively they will provide a key database for studies of galaxy formation and evolution. This survey will also help to compare galaxies in different environments, both crowded and isolated, as well as to compare relatively nearby galaxies to more distant ones (at higher redshifts).

For images and more information about the Coma Cluster, visit:http://hubblesite.org/news/2008/24http://heritage.stsci.edu/2008/24http://www.spacetelescope.org/news/html/heic0813.html

The Hubble Space Telescope is a project of international cooperation between NASA and the European Space Agency (ESA) and is managed by NASA's Goddard Space Flight Center (GSFC) in Greenbelt, Md. The Space Telescope Science Institute (STScI) conducts Hubble science operations. The institute is operated for NASA by the Association of Universities for Research in Astronomy, Inc., Washington, DC.