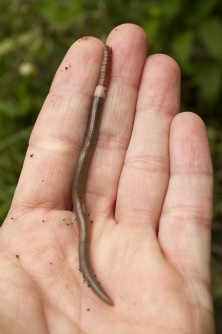 Identifiable by the contrast of a light gray or tan band against a dark body, the Asian crazy worm can be voracious and numerous enough to do serious damage to forests.

Newswise — Wisconsin’s newest invasive species has done its best to stay underground, but the voracious, numerous and mysterious Asian crazy worm has emerged for the first time in the state on the campus of the University of Wisconsin–Madison.

The UW Arboretum, long a refuge for Wisconsin’s native plants and animals, is the first confirmed site for Amynthas agrestis, an invasive worm believed to have arrived in the United States from its native range in Japan and the Korean Peninsula with plants imported for landscaping.

“Amynthas was listed as a prohibited species under Invasive Species Rule NR 40 since its adoption in 2009, because we knew their introduction into our state poses a huge threat to the future of our forests,” says Bernie Williams, invasive species specialist in forest health at the Wisconsin Department of Natural Resources.

Williams and members of the arboretum staff confirmed the earthworms’ presence in the fall of 2013, checking regularly in the spring to see if the worm’s egg cocoons survived a particularly harsh Wisconsin winter. That appears to be the case, according to Brad Herrick, arboretum ecologist and research program manager.

“They are here, but we are still trying to get a handle on the extent of their distribution at the arboretum,” Herrick says. “While we do that, we’re instituting some best management practices — cleaning boots and tools, washing vehicles — and doing our best to stay clear of the areas where we have found the worms.”

In most of Wisconsin, Amynthas is not alone among invasive earthworms. The last glacier, which covered all but the southwestern corner of the state as recently as 20,000 years ago, wiped out all native earthworms.

The earthworms familiar to most Wisconsinites are European species introduced by the first settlers. While they, too, can damage natural landscapes, European species rarely reach numbers like their Asian counterparts.

“Amynthas’ lifecycle is completely different from European species of earthworms,” Williams says. “It breeds en masse, and is constantly dropping cocoons. Where the cocoons hatch, at the soil surface you’ll see what looks like small filament hairs moving on the soil surface in large numbers.”

The grayish Amynthas is darker in color than pale, pinker European earthworms, grows to eight inches long, and has earned common names like crazy worm, snake worm and “Alabama jumper” by flopping and wriggling vigorously when handled.

Unlike the raised, ridged band (called a clitellum) that is found near the middle of European earthworms, the Amynthas clitellum is smooth, flat to the worm’s body and a milky white to gray in contrast to the rest of the worm.

The crazy worms mature in just 60 days or so, allowing populations to double during Wisconsin’s warm months, and can reproduce without mating.

When numbers spike to the point of infestation, Amynthas can eat all the organic matter at the soil surface — exposing the forest floor to erosion, and making it more vulnerable to invasives.

“That’s our concern in the arboretum, and anywhere they turn up,” Herrick says. “Our native plant communities developed without the presence of all these hungry worms. The Amynthas eat so much that they take away the spongy, surface organic layer that those plants need for nutrients.”

That bottomless appetite leaves a characteristic wake in the woods.

“They change the soil structure, leaving behind a balled-up, granular soil,” according to Herrick. “We think that may be the biggest problem for plants, especially when it comes time for seeds to germinate.”

Though they have been in the United States — particularly the Southeast and Eastern seaboard — for decades, there is little research quantifying the damage the new wave of worms cause or effective means to control their numbers. Monica Turner, a UW-Madison zoology professor, and a graduate student in her lab have begun studies on the crazy worms’ assault on soil.

Meanwhile, Williams and colleagues from the DNR and Department of Agriculture, Trade and Consumer Protection are inspecting commercial nurseries around the state. According to Herrick, the arboretum, DNR and other researchers will be testing potential control techniques. But careful cleaning of equipment and quarantine is their first line of defense.

“Fighting invasive species — like buckthorn and gypsy moths and garlic mustard — is a big part of our work here,” Herrick says, “and we’re hopeful we can find a way to protect the arboretum from these worms, and educate others about their impact.”