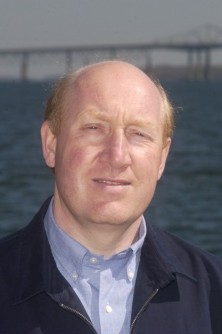 Predicting the severity of a hurricane can mean the difference between life and death. URI Professor of Oceanography Isaac Ginis makes it his business to predict the power of these ferocious storms with a computer model so successful it was adopted by the National Weather Service. As one of the few scientists worldwide to show the role the ocean plays in hurricanes, Ginis essentially proved that ocean temperature is the most important factor in hurricane intensity and power.

Ginis’s research efforts have resulted in pioneering advances in modeling of the tropical cyclone-ocean interactions that have led to significant improvements in hurricane intensity forecast skills.

His research group has contributed to the development of the Hurricane Weather Research Forecast model used by the U.S. National Hurricane Center and Joint Typhoon Warning Center for operational forecasting of tropical cyclones in all ocean basins. He is currently leading a project funded by the U.S. Department of Homeland Security to develop advanced modeling capabilities for more accurate representation of hurricane hazards and impacts in Southern New England. The project allows DHS and other agencies to better understand the consequences of coastal and inland hazards associated with extreme hurricanes and Nor’easters and to better prepare coastal communities for future risks.

Among other things, Ginis can speak to how changes in global climate are playing a role in the increased level of activity in the Atlantic this hurricane season. According to Ginis, “We have seen active hurricanes seasons in the past. The most active was 2005, producing 28 tropical cyclones, of which 15 became hurricanes. This season, however, has broken the record for the earliest formation by storm number and the most active tropical cyclone activity in September thus far.

Newsweek: "Typically, emergency management agencies develop hurricane preparedness and response plans based on historic hurricanes," Ginis said. "But as we have seen in recent storms, such as Hurricane Harvey in 2017 that produced enormous rainfall, a hurricane may do damage through means that are not anticipated by the public and emergency managers and may be very different from previously experienced storms."

Providence Journal: “We’re working to improve existing models and create new modeling capabilities to address concerns about coastal flooding due to storm surge, inland flooding due to heavy rainfall and the challenges of predicting winds over land,” Ginis said.