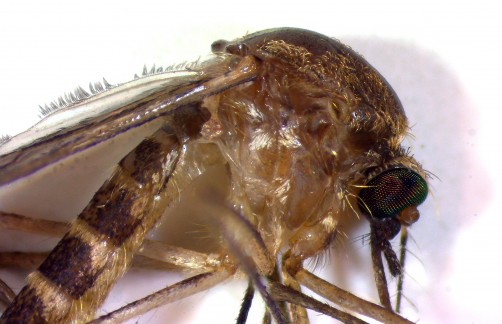 Different forms of the northern house mosquito are morphologically indistinct.

Newswise — 26.04.2016: Researchers from Vetmeduni Vienna for the first time collected quantified data on hybrid forms of two species of the northern house mosquito in eastern Austria. The reproductive hybrid feeds – in contrast to the two known species of house mosquito – on the blood of both birds and humans. Hybrid mosquitoes could therefore serve as a vector for the transmission of avian diseases to people. Identification of the three forms is only possible through molecular biology. Morphologically they are indistinct. The study was published in the journal Parasites & Vectors.

The team of researchers from the Institute of Parasitology at Vetmeduni Vienna sampled nearly 1,500 house mosquitoes in eastern Austria. The northern house mosquito Culex pipiens, representing more than 90% of the total catch, was the most abundant. Culex pipiens comprises a complex of ecologically different forms that are morphologically indistinct. Two of these forms are endemic to eastern Austria. First author of the study Carina Zittra has now succeeded in identifying a hybrid of these two forms.

By far the most common ecological form collected was Culex pipiens f. pipiens. This form prefers to feed on avian blood, reproduces in mating swarms and requires a blood meal as a protein supplement before the first egg-laying. It also hibernates. The second ecological form, Culex pipiens f. molestus, prefers the blood of mammals including humans. It reproduces through single mating, does not require an initial blood meal and does not hibernate. This mammalophilic form of the house mosquito can therefore bite in the winter as well.

“The hybrid form identified by us is a natural hybrid of these two house mosquito forms,” says Zittra. Further studies are needed to determine which of these different lifestyles the hybrid prefers. However, the researchers do not expect the hybrid to show such a clear blood preference as the two common forms of Culex pipiens.Hybrids could serve as bridge vectors

When mosquitoes feed, they don’t only suck blood. They can also transmit exotic diseases such as the West Nile virus. Migratory birds are one way these diseases can come to Austria. A transmission from bird to mammal is unlikely, however, as long as mosquitoes such as the ornithophilic Culex pipiens f. pipens remain loyal to their respective source of blood.

According to Zittra, however, the newly discovered hybrids are known not to have a clear preference for the blood of just one type of animal. This raises the possibility that they could become so-called bridge vectors. That means that the hybrid picks up a pathogen from its original host, the bird, and may transmit it to other birds or other species such as humans.

The frequency of hybrids is currently rather low. “We should not disregard the possible presence of hybrid forms in future screenings, however, especially as the hybrids are capable of reproducing,” Zittra adds.Minimizing the mosquito population

House mosquitos only need a source of standing water for egg-laying, such as plant and flower water or water that has collected in the rain barrel or a toy in the garden. Reservoirs like these should be regularly emptied and care should be taken to prevent standing water or wet areas in order to eliminate potential mosquito breeding habitat.

Zittra also has a valuable tip regarding UV lamps as mosquito traps. “Mosquitoes find their victims by sensing the carbon dioxide released from breath, body temperature and sweat. They are not attracted to light sources – after all, they also bite at night. UV lamps therefore don’t offer much help, except that they attract other, useful insects.”