Hysterectomy Linked to Memory Deficit in an Animal Model

The non-pregnant uterus is commonly assumed to be an unimportant organ. One third of American women have a hysterectomy by age 60, often before natural menopause. Arizona State University researchers have found an animal model of hysterectomy resulted in decreased memory capacity and an altered hormonal profile within two months after surgery. The study suggests an important role for the uterus that could impact cognitive aging. 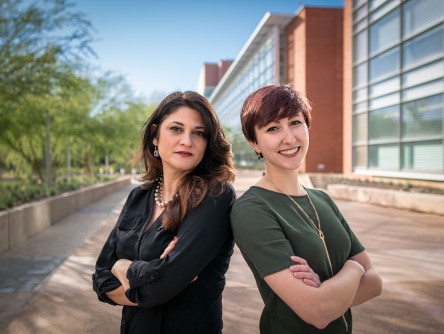 Researchers in the Arizona State University Department of Psychology have found rats that underwent the surgical removal of the uterus with ovaries left intact had a memory deficit, suggesting the uterus might have functions beyond reproduction. The study will be published on December 6 in Endocrinology. Heather Bimonte-Nelson, professor of psychology and senior author on the paper, left, and Stephanie Koebele, ASU psychology graduate student and first author on the paper.

Newswise — By age 60, one in three American women have had a hysterectomy. Though hysterectomy is a prevalent and routine surgery, the removal of the uterus before natural menopause might actually be problematic for cognitive processes like memory.

Researchers in the Arizona State University Department of Psychology have found rats that underwent the surgical removal of the uterus with ovaries left intact had a memory deficit, suggesting the uterus might have functions beyond reproduction. The study will be published on December 6 in Endocrinology.

A dormant and useless organ?

Endocrinology textbooks used in medical and graduate schools describe the uterus as having the sole function of accommodating and supporting a fetus or as a useless organ outside of reproduction. But, there is mounting evidence from research in animals and people suggesting otherwise.

The uterus and ovaries communicate for reproductive functions, but there are also direct connections between the uterus and the brain through the body’s autonomic nervous system. The autonomic nervous system coordinates unconscious functions like breathing and digestion. The lesser understood uterine-brain connections could affect cognitive functions and impact how females age.

“There is some research showing that women who underwent hysterectomy but maintained their ovaries had an increased risk for dementia if the surgery occurred before natural menopause. This finding is striking,” said Heather Bimonte-Nelson, professor of psychology and senior author on the paper. “We wanted to investigate and understand whether the uterus itself could impact brain function.”

The research team used female rats to systematically test the role of the uterus and ovaries in learning and memory. The rats were divided into four groups based on the type of menopause surgical intervention. The three experimental groups were: removal of the uterus with ovaries left intact, removal of the ovaries with uterus left intact and removal of both the uterus and ovaries. The fourth group underwent a sham surgery in which no reproductive organs were removed.

Six weeks after surgery, the researchers taught the four groups of rats how to navigate a maze. Once all the rats had learned this task, the researchers tested the memory capacity of the rats. The team also looked at the reproductive organs and hormones.

“This experiment tests the role of the uterus in cognitive changes that accompany menopause. The researchers use several surgical approaches that are actually used for women who undergo oophorectomy, hysterectomy, or both. This alone is laudable,”  said Donna Korol, an associate professor of biology at Syracuse University who was not part of the study. “One of the beauties of this experimental design was the sampling of different measures from the same rat, allowing for within-animal comparisons across multiple systems.”

A rodent version of the card game “concentration”

During the memory testing, the rats navigated a water maze that looked like a sunburst, with eight arms radiating out from a circular center. There were submerged platforms at the end of some of the arms, and the rats had to swim to locate a hidden platform. In the beginning of the experiment, the researchers placed four platforms for the rats to find. After a rat found a platform, the researcher removed it for the rest of the day. The rat then restarted the maze, searching for the remaining platforms while having to remember both where previous platforms had been and which arms had always been empty.

With two platforms down and two to go, the research team found the rats that had only the uterus removed could not handle the increased memory load. These rats kept returning to places where there had never been a platform, indicating they were unable to remember which arms of the maze led to platforms.

The other kinds of surgery did not affect how many mistakes the rats made in the maze. The rats that underwent the removal of just the ovaries or the removal of the ovaries plus the uterus navigated similar to the group that had the sham surgery.

“The surgical removal of just the uterus had a unique and negative effect on working memory, or how much information the rats were able to manage simultaneously, an effect we saw after the rats learned the rules of the maze” said Stephanie Koebele, ASU psychology graduate student and first author on the paper.

At the end of the study, the researchers looked at the size, shape and structure of the ovaries in all the groups. The ovaries of the hysterectomy-only group were indistinguishable from the ovaries of the sham surgery group, which maintained their ovaries and uterus.

The research team also measured the amounts of different hormones in the blood, like progesterone, follicle-stimulating hormone and luteinizing hormone. Hormones are chemicals made by the body that regulate organs and body systems and send information. The hormone levels in the hysterectomy-only group were different from the sham surgery group, even though both of these groups still had ovaries.

“Even though the ovaries were structurally similar across all the groups, the hormones that were produced in the group that received hysterectomy alone resulted in a different hormone profile,” said Koebele, who has a fellowship from the National Institute on Aging for her doctoral research. “Hormones affect both brain and other body systems, and having an altered hormonal profile could impact the trajectory of cognitive aging and could create different health risks.”

Exactly how the altered hormone profile affects cognitive aging or creates health risks is complicated but is nonetheless very important to study and understand.

“Complicated does not mean impossible,” said Bimonte-Nelson, who directs ASU’s Behavioral Neuroscience of Memory and Aging lab. Her lab is currently testing whether the memory deficit after hysterectomy is reversible with time or is the beginning of a more global memory impairment.

The Arizona State University Department of Psychology operates at the intersection of the mind, brain and behavior and includes internationally-renown scientists who work to unravel many of the mysteries and challenges of human behavior. ASU Psychology is dedicated to engaging bold scientific enterprise, developing innovative psychological methods, and integrating students into the excitement of psychological discovery in both the classroom and the laboratory.