I Can Haz Blood? 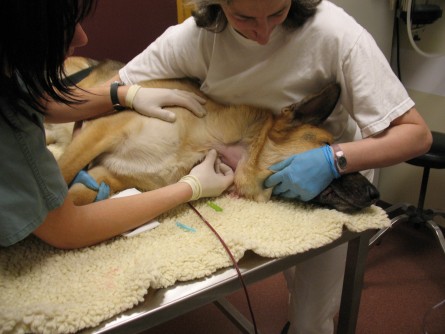 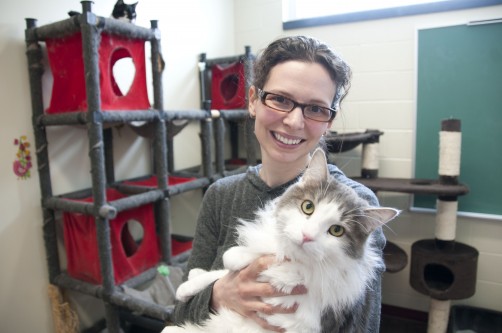 Marie-Claude Blais with Azur, one of the blood donating cats. 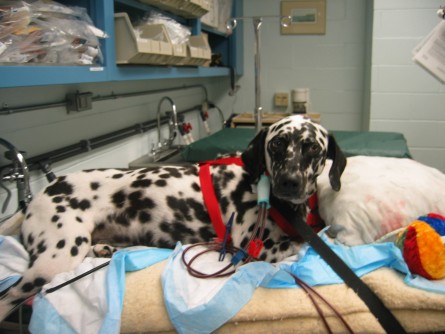 Newswise — Don Juan, Napoleon, Gucci, Azur, and Marissa are very friendly and will rush to welcome anyone who enters their room, and that’s what makes them good blood donors. “I chose them for their hematological characteristics, but also for their good disposition. We didn’t want cats that would be stressed when handled or that needed excessive sedation,” said Dr. Marie-Claude Blais, Professor at the University of Montreal’s Faculty of Veterinary Medicine. Where they are housed, the five cats (four males and one female) can climb to the top of their trapeze and out into the yard through a cat flap. They can lounge on a hammock all day long or play cat and mouse. What is more, the door to their room is never locked, so they can get their daily dose of hugs, a benefit not necessarily stipulated in their contract. “Our cats are chosen by interview. In the last selection process, out of the 12 cats we evaluated, we only ended up keeping one,” Blais said.

An ethics committee oversees the various aspects of this unique blood bank, which also includes canine “volunteers”. Unlike their feline counterparts, Bacho, Dali, Gaspard, Bowie, and Dexter do not live at the CHUV University Veterinary Hospital, but with their families. They come to the hospital at the request of veterinarians and give blood once every six weeks at most. “It’s true that the idea of animals donating blood is strange," Blais said, "but the dogs seem to adapt well. Anyway, they don’t seem to mind coming to the hospital.”

Which animals need blood transfusions? Mainly those on the operating table, but also bleeding accident victims or anemic animals with cancer or immune dysfunctions, for example.

The blood bank already existed before Dr. Blais arrived in 2008, but she has given it a new dimension. “Let’s say I optimized the service – everything had to be rethought, from changing the blood collection bags to redefining protocol.” Maintenance and turnover of blood products requires proven expertise. Storage life is limited and the quantities needed for transfusions fluctuate constantly. “Sometimes we have immediate needs we can't meet, sometimes we have to throw out expired units. It breaks our heart,” Blais said.

Clinician and researcherDr. Blais’ research activities focus on internal medicine and veterinary hematology. "A lot of knowledge has developed in my field of internal medicine, but there is much to discover in some areas,” she said. On top of her research, she is giving courses in Gastro-intestinal Diseases, Emergency Medicine, and Nutrition, running two wetlabs and supervising graduate seminars. She also devotes herself to a clinic for small animals every two weeks, which requires about 45 hours of work. Blais came to the University of Montreal after conducting a postdoctoral fellowship in Transfusion Medicine at the University of Pennsylvania in Philadelphia in 2006. She documented a new blood type in dogs: DAL for “Dalmatian.” “I remember dancing in my office when I realized I was dealing with a new canine blood group,” she said.

Her discovery caused a stir when her article, published in 2007 in the Journal of Veterinary Internal Medicine, received praise from the editor, Jane Wardrop of the University of Washington. In the editorial entitled “A Welcome Discovery,” the author pays tribute to the Quebec researcher. Her findings provide "an exciting and welcome addition to the current body of knowledge in veterinary transfusion medicine and will hopefully prompt further research in this area,” it said.

Dottie and HenrietteBlais made her discovery while following the case of a dog name Dottie. Brought by her owner to the Veterinary Hospital of the University of Pennsylvania due to health problems, the dog received a preliminary blood transfusion to undergo surgery. A few days later, a second transfusion was needed; in the meantime, however, the dog had developed antibodies that prevented a new transfusion.

In fact, no blood available was compatible with Dottie’s system, and the staff wanted to stop there. “Why not investigate further?” Blais asked. “We would have done it for humans.”

It must be noted that the blood system of dogs is quite different from ours. When the researcher took on the subject, 12 canine blood groups were known. Dogs do not have antibodies in their blood directed against most of these. Consequently, an animal can receive blood from almost any other individual; its immune system will accept it. It’s during the second transfusion that things get complicated, because it can be fatal.As a result, none of the 55 blood donors at the US veterinary hospital had a system compatible with Dottie’s. “We had to call upon the Dalmatian breeding community, and the response was immediate. Through social networks, we had blood samples from 13 Dalmatians in 48 hours. Three were compatible.”

Subsequent research showed that several Dobermans and a Shih Tzu had a similar blood type. More recently, it was discovered that a dog kept at the Faculty of Veterinary Medicine, a Beagle named Henriette, had the same blood type. This discovery opened up a whole new area of research.

With her team in Pennsylvania, she repeated her exploit by revealing a similar rarity among cats (she co-authored the article published in the same issue of the Journal of Veterinary Internal Medicine). “There are certainly other groups and sub-groups to document,” says the researcher smiling.

She notes that her canine blood bank is looking for casual donors. With approximately 50 animals, the network can accommodate other “volunteers.” They are looking for dogs of good size, healthy, and an easy-going temperament. They must be able to cooperate willingly with veterinary medicine. 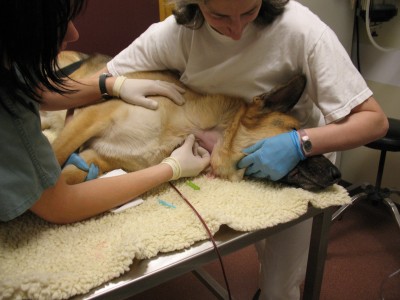 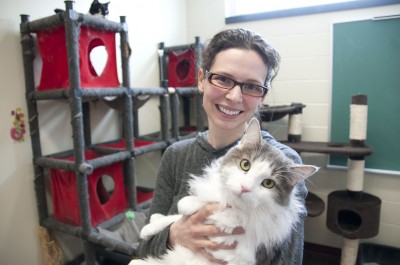 Caption: Marie-Claude Blais with Azur, one of the blood donating cats. 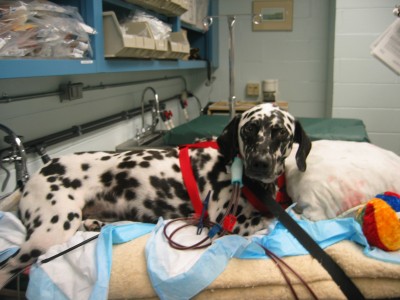