I Can Hear You Now: Clinic Provides Free Hearing AIDS for Low-Income Adults

How a new Ann Arbor program helps those with hearing loss — and provides a blueprint other academic medical centers may follow. 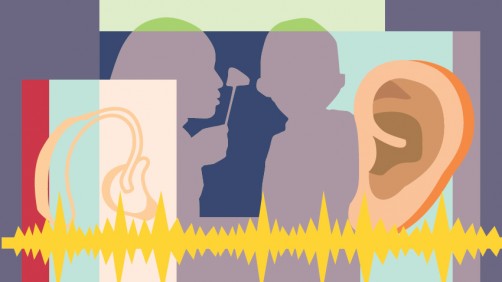 New Ann Arbor program helps those with hearing loss — and provides a blueprint other academic medical centers may follow.

Doctors from Michigan Medicine’s Department of Otolaryngology — Head and Neck Surgery partnered with the Hope Clinic to create Hope for Hearing, a program that provides free hearing aids to uninsured adults.

The partnership between the free independent clinic and University of Michigan started in 2010 to provide Hope Clinic patients with access to specialty care.

“We saw there was a need for hearing aids,” says Aileen P. Wertz, M.D., a fifth-year resident in otolaryngology who also sees patients at the Hope Clinic. “Over half of the patients referred to us with ear complaints had hearing loss and could simply benefit from a hearing aid.”

After recognizing the need, Wertz and her colleagues looked to design a self-sufficient subspecialty program within the clinic that could act as a model for similar projects.

They began by soliciting hearing aid donations and a hearing aid verification system and securing a $5,000 grant for a computer enabled with audiological software and other equipment.

Primary care providers then referred adults with hearing complaints to the program.

Patients went through an initial assessment that included a formal audiogram and screening evaluation. If the audiometric test suggested a significant hearing loss and the otolaryngologist determined that a patient was medically cleared for hearing aids, the patient was referred to audiologists for hearing aid counseling and fitting.

In a study published in JAMA Otolaryngology—Head & Neck Surgery, Wertz and her colleagues examined the feasibility and outcomes of the program.

“During the study period — September 2013 through March 2016 — we garnered 84 hearing aids, and most of them were donated,” says Wertz. “Thirty-four patients were determined to be eligible for the free program and were offered hearing aid services. Of them, 20 patients (59 percent) have been fitted or are being fitted with free hearing aids.”

The cost of hearing aids

Most people who need hearing aids are surprised that neither Medicare nor most commercial insurance plans cover the cost. As a result, there is no price negotiation or consumer benefit.

Wertz says the average Hope for Hearing patient would pay about $2,260 to obtain equivalent equipment themselves or pay $1,210 for the most basic hearing aid available at U-M.

The only costs for Hope for Hearing patients are batteries for the hearing aid and transportation to and from their clinic visits.

Deemed a success with room to grow, Wertz says the Hope for Hearing program is looking for ongoing funding to cover the costs of ear mold and hearing aid supplements.

Wertz attributes some of the success to date to the strong relationship between the Hope Clinic and U-M.

“This hearing aid program began with an established, successful academic center-community program partnership,” she says. “That was an important factor because enthusiastic audiologists and otolaryngologists were already invested and volunteering regularly at clinics.”

“Many patients in this program have required an interpreter to get through the audiologic evaluation and hearing aid fitting,” says Wertz. “Our program has been fortunate that a family member or friend with bilingual abilities has been able to serve as an interpreter for appointments.”