If trees could talk 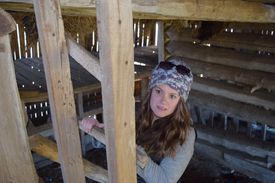 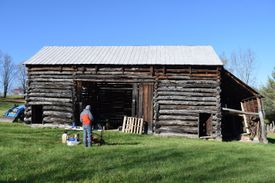 Preparing to collect tree-ring samples from The Pitsenbarger Barn in Pendleton County, West Virginia. The barn was later determined to have an inferred construction date of 1840. 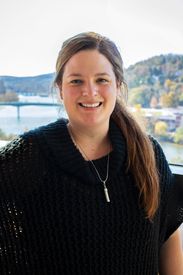 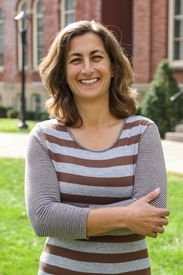 Newswise — Log cabins in West Virginia’s Appalachian Mountains have a story to tell: when people leave, the forest takes over.

Researchers at West Virginia University are using tree-ring dating to determine not only when trees were cut down to build historic log buildings in the region but also what the forests were like before European immigrants arrived. This could help researchers shed light on when Native Americans abandoned the area and how their absence altered the landscape.

Geography graduate student Kristen de Graauw and her mentor, Professor Amy Hessl, uncovered evidence of the significant growth of trees in what may have been a previously cleared area. That growth in the late 17th century coincided with the estimated timing of Native American population decreases following the arrival of European immigrants. This corroborated the hypothesis that a change in the land’s use caused forests to regrow, they explained.

“The historic logs showed evidence that a lot of trees began to grow at the same time across a fairly large area in West Virginia. This synchronous growth may indicate that trees began growing on cleared land that Native Americans had once inhabited and then abandoned following European contact,” de Graauw said. “It’s a small area, but we found compelling evidence that a major forest change occurred, and that change coincided with the estimated timing of depopulation in that particular region. However, there was also a sub-continental drought that may have led to broad-scale forest thinning and subsequent tree growth in the 1670s in eastern North America.”

De Graauw used dendrochronology, or the science of tree-ring dating, to identify when trees grew and were cut down for construction. She sampled logs from buildings like houses, barns, forts, churches and smokehouses. The buildings are in Greenbrier, Hardy, Pendleton and Pocahontas counties in West Virginia and in Highland County, Virginia.

The oldest log building they have sampled so far was built in 1784.

“We know through historical records that European immigrants moved into the study area around the 1740s to 1760s, yet I have not found a building that is from that time period. It could be that the buildings did not last on the landscape. Some people reused the logs; others may have burned, or logs of dilapidated buildings may have been used for fuel,” de Graauw said. “We know that buildings were being constructed prior to the 1780s – we just haven’t found them yet.”

To sample the logs, the researchers used a hollowed drill bit to reach the center of each log.

“This method allows us to capture the rings of the tree all the way from its initiation to the very outer ring of the tree, which reflects when that log was cut down out of the forest,” de Graauw said. “That very last ring is what tells us when the log was felled with the intention for construction. That allows us to know when it was built. By matching patterns of ring-width variability through time using live trees, dead trees and the logs in the buildings, we are able to assign calendar dates to the logs. We can then estimate when the tree began growing.”

As they began their study, the researchers weren’t confident that many building owners would allow the researchers to sample their logs. They were surprised by the hospitality they received.

“Most people were willing to help because they wanted to learn how old their buildings were,” de Graauw said. “It was sort of a win-win – they got to find out how old their building is and tie that date to historical records, and we got to use the data within those logs to reconstruct past forests.”

It is known that Native American populations declined following the arrival of Europeans in the Americas, but it is not well understood when the population decrease occurred in this region or if abandonment of Native American land management techniques would have led to forest regrowth, the researchers explained.

“Sometimes the tree ring record offers a new possibility for understanding history. It’s a new line of evidence. The idea is that when people abandoned their cleared areas, forests regrew, but we don’t even know what tribal groups were here,” Hessl said. “The study needs to be replicated in more places before we can really confirm what we are seeing. But, de Graauw’s idea of applying these data from historic buildings to this research question is novel. The fact that she has observed some potential legacies there is really exciting.”

In the future, they hope to expand the study by adding other methods, including charcoal records and archaeological techniques, and taking samples in other locations to help disentangle whether trees established as a result of depopulation or the previously identified sub-continental drought event.

“There is so much to still learn about Native Americans at this point in history in eastern North America as far as the spread of epidemics and warfare and when depopulation occurred in different places. The idea is that depopulation wouldn’t have all happened at the same time. It would have been spread out based on physical geography and the interactions of people,” de Graauw said. “In other regions, I would expect that depopulation would not have necessarily happened at the same time that it did here. There’s a difference in timing, which is why working with archaeologists is really important for us.”

Dating log buildings has been a hobby of de Graauw’s for more than 10 years. It has allowed her to blend her passions for American history and Appalachian folklore with her research interest in forest ecology.

“As I started graduate school, I was trying to find a way to merge my hobby with my academic interests,” de Graauw said. “This project really came from that.”

The study, “Do Historic Log Buildings Provide Evidence of Reforestation Following Depopulation of Indigenous Peoples,” was published by DeGraauw and Hessl in the Journal of Biogeography.

Caption: Preparing to collect tree-ring samples from The Pitsenbarger Barn in Pendleton County, West Virginia. The barn was later determined to have an inferred construction date of 1840.