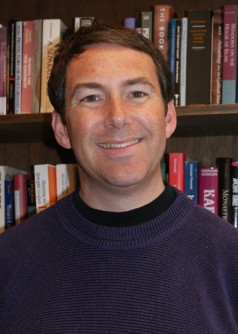 Newswise — Michael Penn, associate professor of religion, has received not just one, but five awards to fund his research and writing for the next two years.

Penn’s focus is on early Christian-Muslim relations, particularly writings by Syriac Christians who lived in the same region as Mohammed and his followers during the rise of Islam from the seventh to the ninth centuries. (Syriac is an Aramaic dialect, which, according to Penn, few people speak today.)

While there have been a handful of journal articles on this topic, Penn says these early Christian writings have generally been overlooked because few scholars read ancient Syriac. His forthcoming books on this subject will be the first to delve into this material and pull it together into one work.

“In modern times, we have gotten the message that Christians and Muslims have been in conflict for a long time,” he says. “What I’m interested in is how these Syriac sources contradict that notion. From the beginning, Christian-Muslim relations were not univocal—they weren’t always hating each other or loving each other. The writings I’m working with make for a much more complicated understanding of Christian-Muslim relations.”

This summer, with the support of a $4,500 award from the American Academy of Religion, Penn will travel to London to work on a project using digital handwriting recognition software to analyze ancient manuscripts. He is collaborating on this project with Smith College computer science professor Nicholas Howe.

While in London, Penn will also be researching and writing two books as part of a $7,500 grant from the American Philosophical Association and the British Academy. In the first book, he will analyze the earliest Christian works on Islam, which were written in Syriac. The second book will be an anthology of Penn’s translation of these writings, many of which are known to only a handful of specialists.

Penn will continue working on these books for the next two years with the support of two grants. This fall, he will begin a yearlong residency at the Institute for the Study of the Ancient World in New York City, for which he was awarded $63,000 by the institute. In fall 2012, he will spend a year in residency at the National Humanities Center in North Carolina, thanks to a $75,000 award from the American Council of Learned Societies.

“With these books, I want to spark interest so that others continue to study these subjects,” he says. “Given current events, I think this kind of research is relevant because history matters—particularly that of the world’s two largest religions—and it’s important we get that history right. This group of Christians got excluded mainly because they wrote in the ‘wrong’ language.”

Clearly Penn is on to something, if all these awards are any measure. Though he received five grants, he ended up having to choose between two of them because they conflicted with one another.

“This was clearly the year I should’ve played the lottery,” he says.