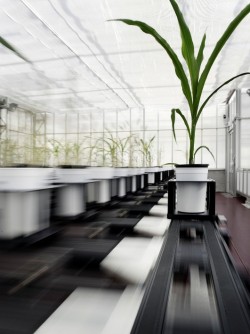 Plants growing in the Plant Accelerator

Newswise — University of Adelaide computer scientists are developing image-based technology which promises a major boost to the breeding of improved cereal varieties for the harsher environmental conditions expected under climate change.

Led by Professor Anton van den Hengel, Director of the Australian Centre for Visual Technologies (ACVT), the computer scientists are joining with plant physiologists and an industry partner to develop technology that will be able to accurately estimate plant yield of potential new cereal varieties well before grain production.

They will use multiple images of plants as they grow to construct computerised 3-D models that will match the plants’ changing “shape” with its biological properties and, ultimately, predict yield.

"We are using image analysis to understand the shape of plants so that we can automatically and rapidly measure plant structural properties and how they change over time," said Professor van den Hengel.

"We want to be able to predict yield based on a collection of measurable plant attributes early in the plant’s lifespan, rather than having to wait for the plant to mature and then measuring the yield."

"This novel image analysis technology promises to transform crop breeding and, as a result, the agricultural industry," he said.

"By expediting the development of plant varieties capable of delivering increased yield under harsh environmental conditions this project will help improve Australia’s agricultural efficiency and competitiveness. It will help Australian agriculture prepare for the impact of climate change and the need to produce more food for a growing population."

The project, 'Improving yield through image-based structural analysis of cereals', has been funded under the latest round of Australian Research Council Linkage Projects.

The project involves industry partner LemnaTec, which provided some of the equipment used in the Plant Accelerator. They will help commercialise the technology.